We've been at Natchez Trace RV Park near Tupelo, Mississippi for the past week. We've experienced some beautiful weather and had some time to relax, as there doesn't seem to be much to do in Mississippi. Our original plan was to arrive at Gulf State Park in Gulf Shores, Alabama on December 1st, and explore as we slowly made our way south. We've actually reserved our site in Gulf Shores beginning on November 11th because there just wasn't that much we were interested in exploring on our way there.

Tupelo's claim to fame is that Elvis Presley was born here on January 8, 1935 in a house his father built, pictured below. I didn't know that he had a twin who was still born. The Presleys lived in Tupelo until Elvis was 13 years old when they moved to Memphis to try to make a better life, as they were quite poor in Tupelo. 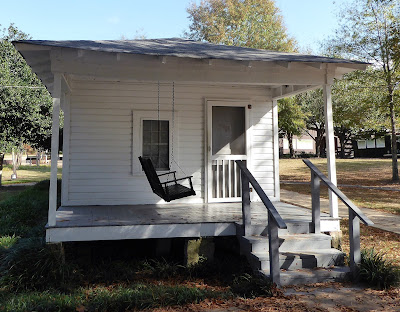 There is a nice park near downtown dedicated to Elvis. A museum, memorial chapel, birth house, childhood church, statues and fountains are all in the park. You can pay to get a tour and see the museum, or you can just wander around for free. We are not super big Elvis fans, so we just wandered around a bit.

We did go into the gift shop and found out we could watch the movie about his life in Tupelo for free. This picture of Elvis as a boy was on the wall. 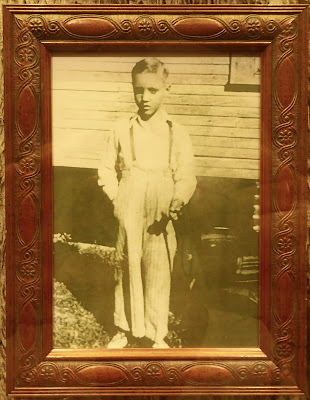 This statue represents Elvis at age 13 when the family moved away. 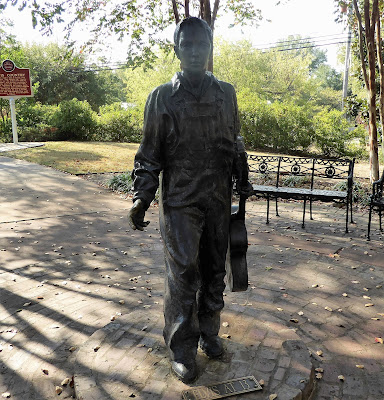 His childhood church was moved from a block away to the museum grounds. Elvis enjoyed singing and often sang in church. 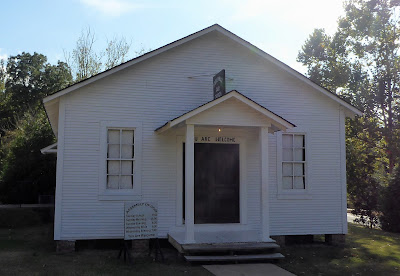 For his 11th birthday, Elvis really wanted a rifle or bicycle. His mother took him to Tupelo Hardware to pick out his present, but she wouldn't let him get the gun or bike as she thought he would hurt himself with either of them. A store clerk showed him a guitar, and although he really didn't want it,  his mother bought it for him for $7.75. As they say, the rest is history! The hardware store opened in 1926 and is still in business being run by the fourth generation of the Booth family. 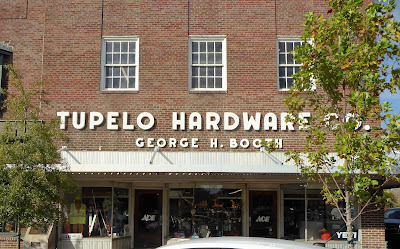 While we were here, we also visited the Natchez Trace Parkway Visitor Center. I had heard of this parkway, but really didn't know much about it. It's a 440 mile scenic road that goes from Nashville, Tennessee to Natchez, Mississippi. Commercial vehicles are not allowed, but recreational vehicles are.

We discovered that the route was used by Indians many years ago. Traders from the north would bring their goods down the Mississippi River on flatboats to sell in the south. Since they couldn't take their boats back upriver, they would sell the boats as well and use the Natchez trail to walk back home. It became a popular route and was used heavily until steam ships were invented. The trail was becoming overgrown when the Daughters of the American Revolution members lobbied the government to have it paved and preserve the roadway for its natural and cultural heritage.

One of the brochures I picked up about Tupelo suggested eating at the Neon Pig Cafe. They have a burger called the Smash Burger that was voted as the best burger in America in 2015 by Thrillist.com (which I've never  heard of). The cafe is a farm to table establishment and also a butcher shop and market. The burger is made of a mix of ground steaks and has a hearty smokey flavor. We each ordered one, but neither one of us were too impressed. It was actually too smokey for my taste, and we both ended up with indigestion to boot. Oh well, you win some, you lose some. 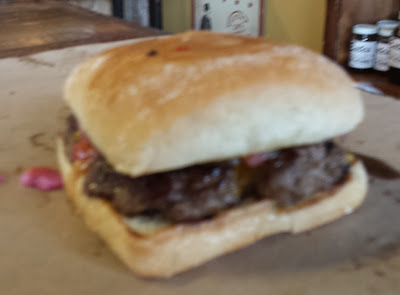 Tomorrow we're heading to Jackson, Mississippi for a few days. We'll see what we can find to explore there.

Don’t wish upon a star – Reach for one!
Posted by RV Khronicles of Kevelyn at 5:14 PM