After my disastrous golf game two weeks ago, I ordered a new driver on ebay.  I used it yesterday, and I did much better.  The driver has a very large head, and I seem to be able to hit the ball much better.  I also have a hybrid 5 iron/wood which I can hit pretty well in the fairway.  My chipping has always been OK.  I’m still working on not hitting the ball too hard while putting.  So, I can say I actually had fun golfing with Kevin yesterday.  I guess I really only need 4 clubs to play with.  Whatever works, right?

Last night some severe storms came through Wisconsin.  I’m so glad we bought a weather radio when we started fulltiming.  It was going off like crazy.  Our county was under a tornado warning, but we got lucky.  The worst of the storms went just south of us.  We had very heavy rain, but did not get the strong winds.  There were two tornados reported south and west of us. Luckily, they weren’t too severe.  Mostly downed trees and power lines.  We lost our satellite TV for about 45 minutes because of the dark clouds and heavy rain.  Without TV coverage, it was great to be able to listen to the weather radio.  I was also able to track conditions using the internet on my phone.  All of this recent technology sure makes fulltiming easier.

Last summer we bought an RV surge protector at a camping rally.  It’s the kind that you plug into the electrical box outside and then you plug your RV cord into it.  There was quite a bit of lightning last night, and the surge protector kicked off our power twice.  I’m really glad we bought it.  I’d hate to think what could have happened without it.  With two computers, two TVs, air conditioning and all the other electrical components, I think it was a terrific investment.

We spent the weekend camping with a camping club we belong to.  We had a great time.  The campground is in Amish country, and I couldn’t resist the excellent bakery.  They sell small pies so I bought cherry, peach and lemon meringue pies.  I also got a pan of pecan rolls.  I froze two of the pies as I am the only one who eats them.  Kevin doesn’t like the pies, but he got some carrot cake.  I won’t tell you what the scale said yesterday morning.  Some extra walks are in order :)

Our son, Eric came for a visit on Saturday.  We’ve been members of this camping club since he was a baby.  He knows many of the people, but hadn’t seen them in quite some time.  Everyone told us how great it was to see him again.  I think he had a good time.  Thanks Eric for the visit.  You know how much we love it!

We also bought a small table made by the Amish.  We bought one last year and liked it so well, we bought a second one.  It is made so the bottom slides under the couch so you can have it as close as you want it.  It is the perfect size for a laptop and there is room for an external mouse.  Neither one of us like using the mouse on the laptop. 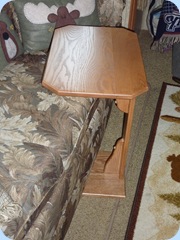 I’m loving the Verizon air card we got for internet.  Both of us can be online at the same time.  Right now I’m sitting outside blogging while Kevin is inside playing games.  It’s hot and muggy today so the air is on.  I was freezing inside.  It’s so nice to be able to take my computer outside and still have a connection.

Kevin and I are complete opposites when it comes to temperature.  Kevin is always hot.  I feel bad for him when he’s sweating up a storm.  However, when he is comfortable, I’m freezing.  Right now I sitting in the shade and am so comfortable.  I even have my legs out in the sun for a little tanning :)

Tomorrow we’ll be heading back to our old stomping grounds.  We both need haircuts, we’ll pick up our mail from Eric’s house, and will visit my mother.

Have a great day!

Posted by RV Khronicles of Kevelyn at 1:11 PM 3 comments: Links to this post