A couple of months ago I signed up to get Groupon emails for the Tucson area. One of them was for a half-price bike tune up. We bought a tune-up for each of our bikes at a cost of $25 per bike.

Once we got here, we realized that the bike shop was actually 30 miles north of where we are staying. It turns out that Catalina State Park is practically across the street from the bike shop. So, today we dropped off our bikes for their tune-ups and drove over to the park to do some hiking.

The trail map showed 3 hikes that were about 1 mile each. The rest of the hikes were 7 to 10 miles one way with pretty steep inclines. For some reason, my joints were aching pretty bad today so we opted for the shorter hikes. Here’s a view of the Catalina Mountains from the Nature Trail. It looks like there is ice flowing down the side. Upon closer inspection, it was just some shiny rock. 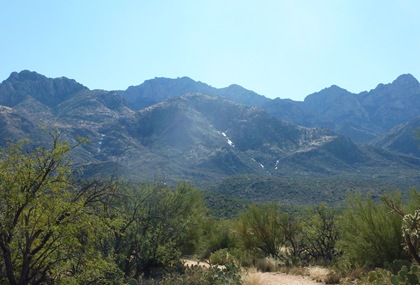 I love the auto timer feature on my camera. 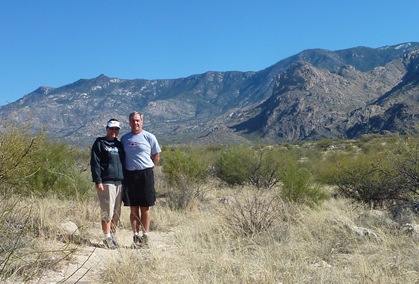 These two Saguaro each had over 20 arms. They are so cool.

The second trail that we hiked was called Birding Trail. It’s near the Sutherland Wash so there were actually trees and grassy areas. We didn’t see many birds though. 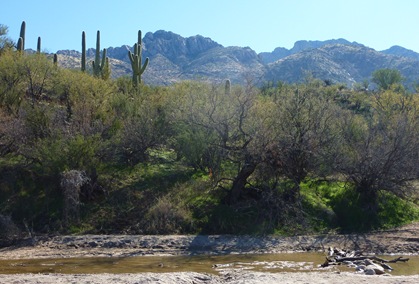 The third trail was called Romero Ruin Trail. Ruins from a Hohokam village dating back to 500 A.D. have been found in this area. There has been some excavation done, but mainly there are just some piles of rocks to see. I didn’t take any pictures of them. We saw lots of piles of rock just like it last year at some of the sites we visited. 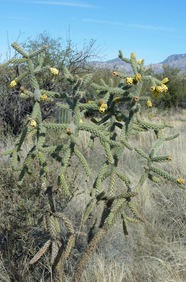 We did notice some interesting plants. I think both of these plants were a type of cactus, and they both had what looked to me like some type of fruit growing on them. One was yellow and the other was red.

It’s hard to see the little red “berries” on this one. If you want to get a better look, click on the picture to enlarge it. We hiked a total of about 3 miles. Then we headed back to the bike shop. I asked a few questions regarding what was done to our bikes, but the guy was very unfriendly. His demeanor was probably one of the worst customer service experiences I’ve ever had in a retail setting.

I road my bike around the parking lot and it did appear it was shifting better. So, I guess I just have to assume he did a good job and gave our bikes the tune-ups we paid for. I was hoping he could help me with the broken computer device I have that tracks your mileage and stuff like that. When I asked him about it, he didn’t even look at it. He just said he couldn’t do it. Oh well, I’ll find someone else who wants to earn some business from me. I also want to get a little mirror to put on my bike so I can see behind me. There are plenty of other bike shops around.

We had a buy one, get one free coupon for a Dairy Queen Blizzard so we had to stop on the way home and get our DQ fix. We also passed a Trader Joe’s so Kevin stopped and I ran in to stock up on the cranberry oatmeal I love. I did a quick look around, but I’m always overwhelmed in their stores. There’s so much I’m not familiar with. Anyone have any Trader Joe’s recommendations?

Our Wisconsin friends arrived in Tucson today. It turns out that Dick had to have a stent procedure done the day before they left home. These are the 2 couples going on the cruise with us. We’re going over to their rented condo tomorrow and discuss what we’re doing for the next 9 days before we head to San Diego. We certainly don’t want to put any stress on Dick. He needs to rest so he can be in great shape for the cruise.

I’m wondering what the news coverage around the country was this past weekend regarding the Tucson shootings a year ago. Last Sunday was the one year anniversary of that tragic event. As you can imagine, there were a number of vigils and tributes held in Tucson over the weekend. There was a great deal of news coverage with a couple of hour long specials. Congresswoman Gifford was in attendance. It’s good to see her doing so well, but it looks like she still has a long road ahead of her.

Posted by RV Khronicles of Kevelyn at 8:32 AM 9 comments: Links to this post