We returned to Wisconsin on April 20th after having left Yuma on the 4th. We are so grateful to have had a very uneventful trip back other than having to wait a few extra days because of two late snowfalls in Wisconsin.

In the week before we returned, Beaver Dam had a total of 14 inches of snow. We were so thankful that our coworker Mike brought over the tractor with a bucket on it and pushed the snow and ice off of our site. It made it so much easier for Kevin to back in. The four wheel drive came in very useful on the snow across the road as he made the swing to get in. 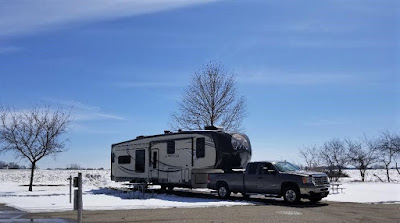 Someone left an abandoned ice fishing shack in the boat launch parking lot across the road. Not sure what the county is going to do with that. Even with the snow, there were people fishing when we arrived. 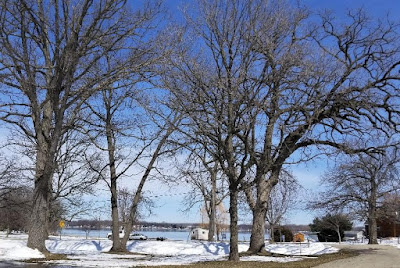 The campground had six reservations for the weekend we arrived. With the six inches of snow on Wednesday, they all ended up cancelling, so we had the place all to ourselves the first weekend we were back. All of the snow had melted by the middle of the next week. 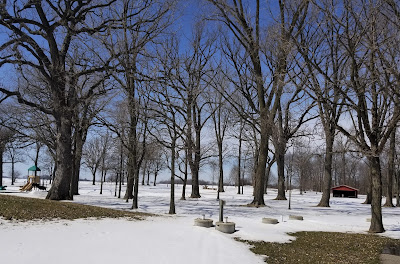 This weekend we have seven sites occupied. Six of them were a group from the Wisconsin Camping Association Club. It was still quite cold with a brisk north wind and highs in the low 50s and lows near freezing.

Five years ago some red-tailed hawks built a large nest in one of our tallest trees. They occupied the nest for three years. Last year they did not return, and the nest was empty. We were quite surprised to see a large white bird sitting in the nest when we arrived. At first we thought it was maybe an eagle, but when we pulled out the binoculars, we could see that it was some type of white owl. 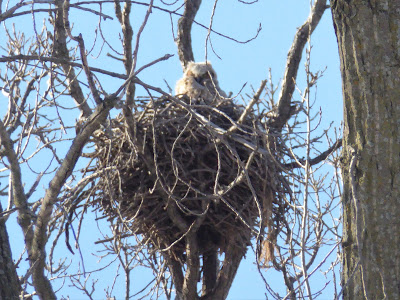 The next day we saw a brown owl sitting in the nest. 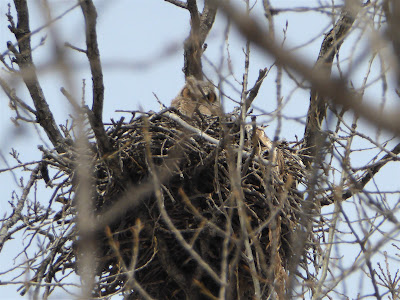 I did some online research, and discovered they were great horned owls. The white one is the baby which is born with the white downy feathers. These owls take over abandoned nests and lay their eggs earlier than other birds, usually in January. So, the baby is already quite large. I've only seen the adult a few times. The baby sits on the edge of the nest almost every morning. 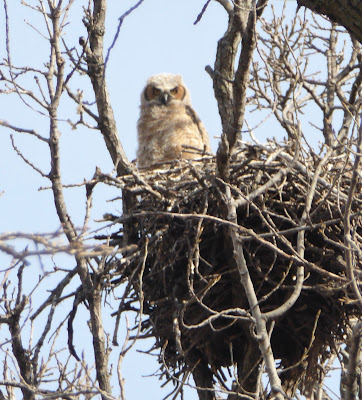 This cardinal was chirping up a storm one morning on the highest branch of one of the tallest trees in the park. I love the zoom on my camera. He was quite a ways up there. He looks like he still has some of his winter plumage. 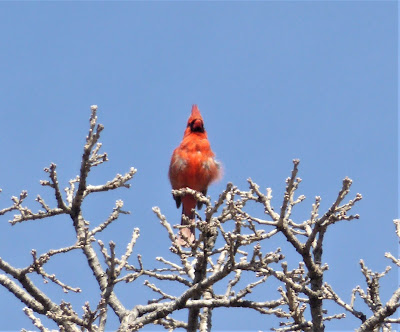 Last summer a large tree came down in the park during a thunderstorm. The county cut it up and filled our woodshed last fall. There were still quite a few large logs left, so they put them behind the wood shed for future use. Yesterday Woody Woodpecker was working away at one of the logs. I think it is a pileated woodpecker. 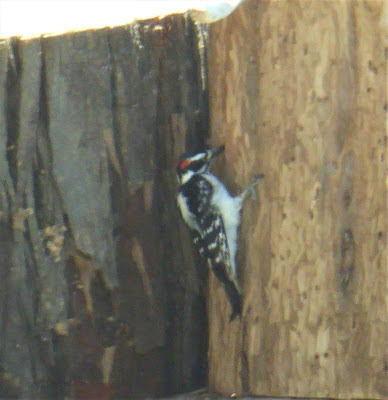 Temperatures are finally supposed to get warmer this coming week. We may even go golfing on Monday. It looks like April 2018 may go into the record books as the coldest on record in southeastern Wisconsin. The next two days are expected to be above average, so they might not break the record, but it will be close. Either way, it has been too cold. Hoping May will be much warmer.

Don’t wish upon a star – Reach for one!
Posted by RV Khronicles of Kevelyn at 7:57 AM 2 comments: Links to this post