We're having a great time on our trip to Seattle. The weather here is certainly unusual. It changes by the minute. It can be sunny and raining at the same time. Today was very windy. Highs have been around 50 degrees.

Thursday we drove to Olympic National Park. We took the ferry across Puguet Sound. 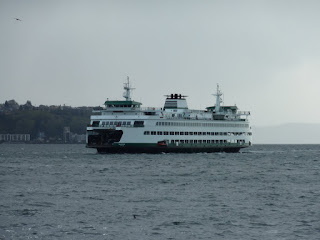 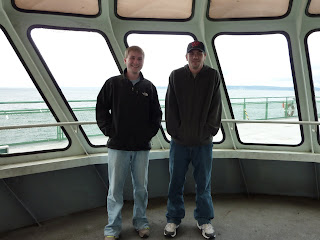 The National Park road to view the mountains was closed due to snow. We did see the mountains from the main coastal road. We went from sun to clouds to rain to sun all day. 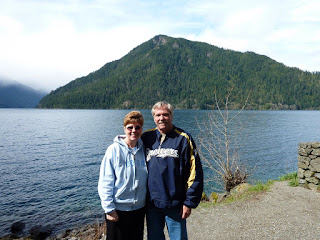 We stopped at the visitor center in Forks. This is the town where the Twilight books take place. They had a replica of the truck Bella drives in the movie. Every other business in town had a name relating to the Twilight movies. There was the Twilight Diner, Twilight Delights, and Bella's First Aid Pharmacy (which she will probably need if Edward bites her and turns her into a vampire). 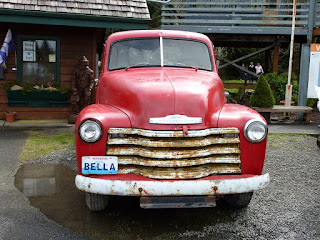 We hiked down a few trails along the Pacific Ocean. The surf was amazing. The tumultuous waves were crashing to shore. The picture doesn't do justice to the power of the waves. 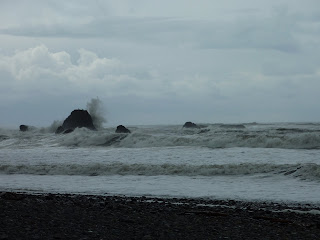 On the other side of the park was a temperate rain forest. It is part of the only rain forest in North America. It starts in Alaska, comes down through Canada and then into parts of Washington, Oregon and California. The average anual rainfall is 240 inches. The moss covered trees were beautiful. It felt like we were in another world. 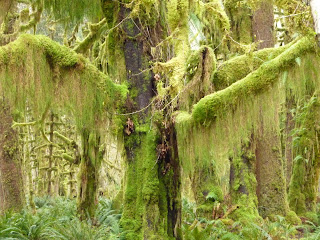 Yesterday we took a tour of Boeing. Their main production building is in the Guiness Record Book as the largest building in the world by volume. To put it in perspective, you could fit over 2,000 average size homes in the building. It was impressive to see the facility and the airplanes being built. They have over 30,000 people working at their facility just north of Seattle. Their flight museum was interesting. Here we are next to the tailfin of a 747. It's over 3 stories high! 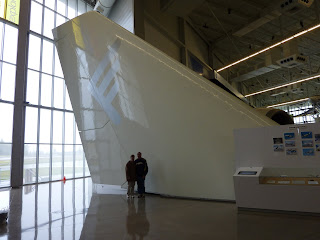 We spent the afternoon at the Pike Place Market, home of the Pike Place Fish Market. This is the place that has become famous for the "Fish Philosophy" books being used in corporate America. The employees have fun at their job bantering with the customers and throwing the fish to each other. Several years ago, the principal of a school I used to work at gave every employee a copy of the book. It was a very interesting concept. Too bad my current employer hasn't adopted the ideas. We ended the day having dinner at Ivar's Acres of Clams in downtown Seattle. It is a seafood restaurant which has been in business since 1938. The food was delicious. 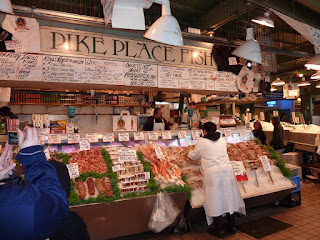 Today we plan to head back to downtown Seattle. This vacation has been "just what the doctor ordered". I really needed to get away from my hateful job and the stress of selling the house. Hopefully, our next vacation will be in the RV!!!
Posted by RV Khronicles of Kevelyn at 9:13 PM 1 comment: