Quartzsite and Another Great Hike

Last Saturday we drove about an hour to Quartzsite to attend the annual RV show held there. Dick and Wanda came with us. One of the reasons I wanted to go was to see if I could find any deals for RV parks in Florida for next winter. The only booth there with Florida parks was the Encore Resorts corporation. I spoke with one of their reps, and she is supposed to be getting back to me this week with some possibilities, so we'll see how that goes.

We did manage to do some shopping at the show as well. A tire pressure monitoring system has been on our radar for a while. Some people swear by them and wouldn't be without them. Others say they are useless and not worth the money. We spoke to a couple of vendors selling the systems. We ended up buying one of them for the four wheels on our fifth wheel. We'll see if it helps us to avoid any future tire blow outs. At $218 we thought it was worth it for some peace of mind.

We also purchased two very nice folding chairs. I've been pricing these type of chairs, and felt the $35 was a good price. The chairs are very comfortable. I've always liked the director style chairs because they have the attached side table, but I never found one that was comfortable to sit in. The plastic tray on the side of the new chair fits great, and now I have a comfortable chair with a side table as well. The side trays were two for $10, which is the best price I have seen them at. These trays only work on recliner style chairs. Our new chair is a five position recliner without the bottom part for your feet. We'll just use a foot rest, and it is much easier to store and transport than a full recliner. 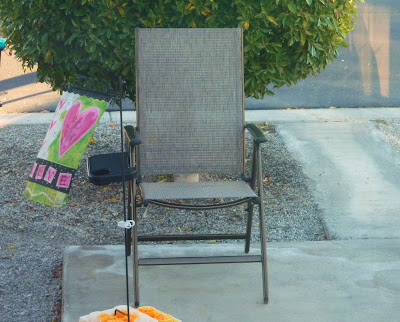 Another reason for going to Quartzsite last Saturday was to attend the second annual Bloggerfest. It was an opportunity for bloggers to gather and meet in person. George and Suzie of Our Awesome Travels did a great job of planning the event on the BLM lands outside of Quartzsite. Over 50 people were in attendance. We reconnected with some people we had met in the past, and met some new bloggers as well. A great time was had by all. 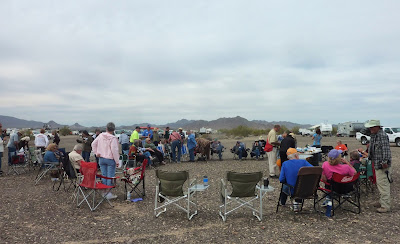 Yesterday the hiking group drove about ten miles east of Yuma to hike on BLM lands near Muggins Peak shown below. 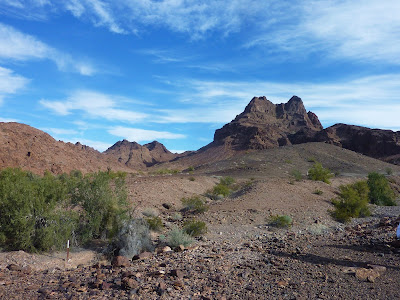 This was probably my favorite hike we've done with the group. We did a little bit of scrambling over rocks and there were a few places that were a bit dicey with loose rocks or climbing up and down a few steep spots. But overall, we walked along fairly flat trails or in the washes near the bottom of the mountains. The scenery was beautiful, and I could actually look around me rather than focusing on my feet to make sure I didn't step wrong and fall. Near the beginning of the hike, we meandered through some slot canyons. 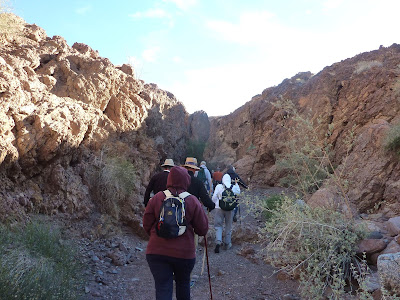 Here's part of the group. There were 43 hikers on this trek. That's a record for the group, which I think is in its 12th year. 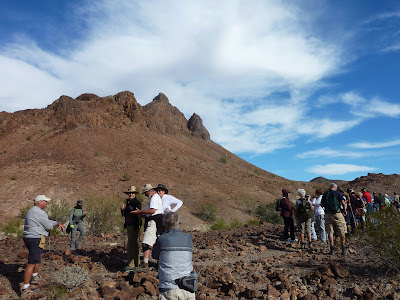 We stopped for a break at this interesting spot. There are a number of places in this area of the desert where the wildlife people have placed water storage tanks underground. They collect rain water, and then slowly disperse it in the summer so the animals don't die. The main purpose is to keep the big horn sheep population healthy. With humans infringing on their water territories more and more, the sheep were becoming endangered. This dam has a 2,500 gallon water tank under the ground in front of it. The water collected in it is then slowly released into the pool at the bottom behind the dam. Animals such as the sheep can come here to drink in the heat of the summer. 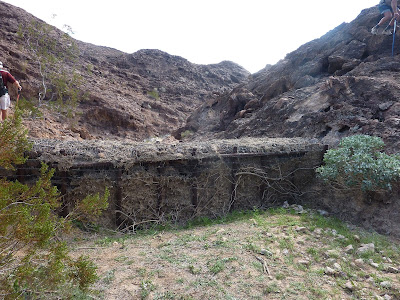 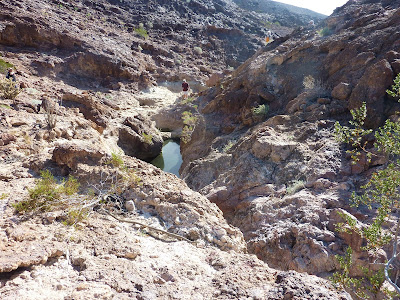 We hiked over 5 miles, and it was a great workout.

This morning we are playing pickleball again. We try to play at least once a week. After that, I'm going to a pie crust making activity with Wanda. We will each make our own pie with a crust recipe one of the workampers here in the park will share with us. She brought one of these pies to a shared meal at the park, and everyone raved about it. So, she is hosting this activity to share her crust recipe. I'm not much of a baker, but it sounded fun. There is even a lunch provided.

Don’t wish upon a star – Reach for one!
Posted by RV Khronicles of Kevelyn at 9:54 AM 3 comments: