On Saturday we went to Pioneer Square in Seattle. It is the original area where Seattle was built 150 years ago. The architecture of the buildings was beautiful. We went on the Underground Tour. Seattle was originally built at sea level and had many problems with drainage and sewage. In 1889 there was a great fire which destroyed 33 square blocks of the business district. The powers that be decided to build retaining walls around the original blocks where businesses were located and raise the street level about 10 feet. Business owners built on top of their original structures which created an underground. There are still many of the original structures beneath the current buildings. It was an interesting tour; however, our tour guide was a bit too kindergartenish for our liking. Seattle is named after Chief Seattle. Here are my boys next to a statue of the Chief. 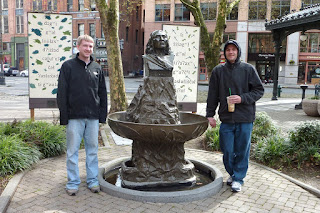 Yesterday we drove to Mt. Rainier National Park. Mt. Rainier is 14,400 feet. It is about a 2 hour drive from Seattle. We were surprised to find the ground was still snowcovered. We visited the museum and went on a short hike where we saw this tree. The beavers have been quite busy. 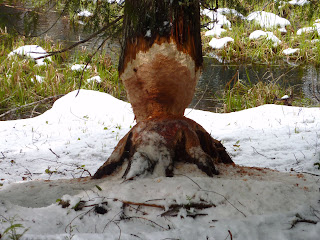 Mt. Rainier is in the background of this picture. We could see it even though you can't see it in the picture. The winds picking up moisture as they come over the mountain cause it to be cloud covered most of the time. We were planning to drive further up the mountain to the Paradise Visitor Center where there were supposed to be better views. Just as we were getting back to the car to head up the road, they closed it. A tree had blown down closing the road. They told us it would be about an hour to clear the road so we decided to wait. An hour later they told us that more trees had been knocked down by the first tree and it was too unsafe to let anyone up the road so we had to turn back. We are thinking of going back tomorrow. We'll call ahead this time to see if the road is open :) 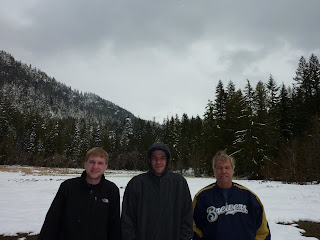 Today we went to the Space Needle and the Hiram M. Chittenden Locks. The locks were opened in 1917 by the Army Corp of Engineers to connect Lake Washington with Puguet Sound. Originally, it was built to transfer lumber and coal from eastern Washington to the ocean for shipping. Today, it is one of the busiest locks in the country for commercial and pleasure boats. A fish ladder was also built to allow the salmon to move to the inland lake for spawning. I learned that salmon are born in fresh water, swim to salt water where they live until they swim back to the fresh water for spawning. That's a lot of swimming! 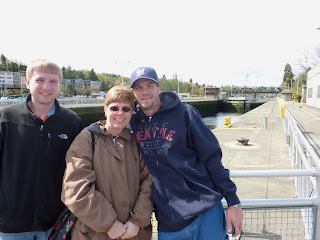 The Space Needle was built in 1962 for the World's Fair. It is just over 600 feet tall. No workers died during the construction. That's a a good thing. It's a pretty amazing fact when you see the pictures of how the steel workers were crawling around on small beams with gale force winds blowing. We rode to the observation tower and saw some beautiful views. The sun was actually shining while we were there. The weather here is very unpredictable. It goes from sun to rain to sun several times a day. Some days it is just clouds and rain. There haven't been long rain showers, just frequent ones. 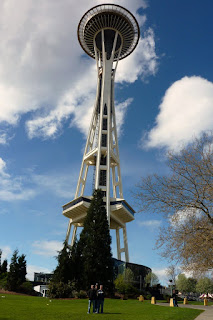