One of the prettiest sites every summer at Beaver Dam Lake are the white pelicans. Groups of them glide across the sky or swim in the lake. Normally, they don't hang out in the bay where we are located. A few weeks ago, the DNR stocked the lake with some little fish from the pier at the park. Since then, the pelicans have been hanging around our bay and filling up on fish. I sure enjoy watching them. 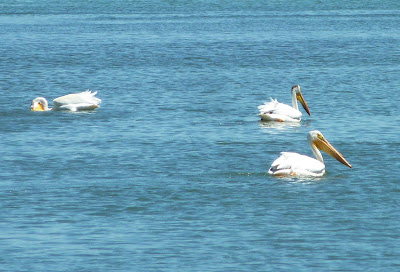 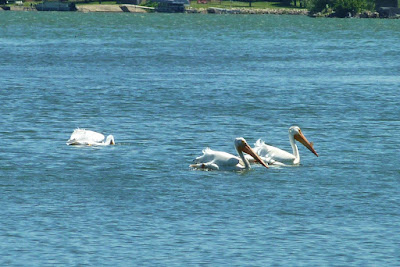 There are also some beautiful lily pads growing in the bay. However, if you look closely, you can see the blue algae at the top of the picture. It's a pretty color, but dangerous to touch. 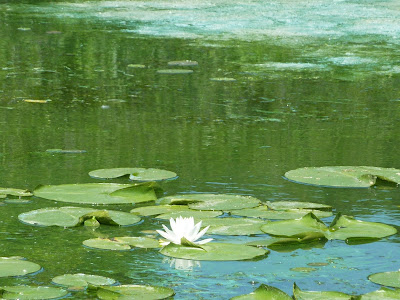 Things have been going well at the park. After the excitement on Memorial Day weekend; we've been quite busy, but people are behaving.  We have been full or near full every weekend. Even during the week, we've had a handful of campers every night. It looks like we might have a repeat of our record breaking summer last year.

Monday night was another full moon. I don't know what it is about a full moon, but they enchant me. This one was called the strawberry moon because it happens in June during strawberry season. It also happened to occur on the summer solstice. The news people said that only happens about every 70 years, so this will probably be the only time we witness that event. Of course, I needed a picture to document it. My camera doesn't do moon shots very well. It only has a 12x zoom. I've ordered a new camera with a 30x zoom, so I'm anxious to see how that works. 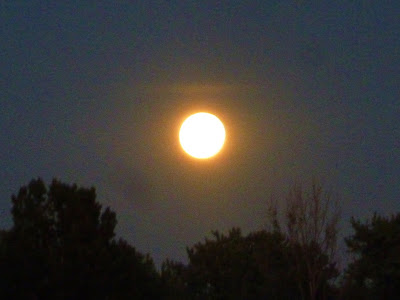 Our 39th wedding anniversary was on June 11th, which was a Saturday. Since I was working, we just enjoyed the weather and sat outside most of the day. On Sunday we celebrated by going out to dinner.

I hope everyone enjoyed their Father's Day weekend. We didn't do anything special. Kevin heard from both boys, and we just sat around and relaxed. Eric is coming this weekend to celebrate with us. I'm looking forward to having him here for a few days.

We had a very pleasant surprise on Monday afternoon. Our friends Dave and Judy stopped by for a few hours to visit us. We haven't seen them since last year, so it was great catching up and seeing them again!

Don’t wish upon a star – Reach for one!
Posted by RV Khronicles of Kevelyn at 7:46 AM 1 comment:

Alcohol May Have Been a Factor

We had quite the eventful start to the Memorial Day Weekend a week ago. Our small campground was fully booked, and I knew we were going to be busy.

One of our sites had been occupied for the entire month of May by a guy in a pop-up who had come from Iowa to Beaver Dam for a new job. I had talked to him a couple of times to make sure he understood that his site was reserved for Memorial Day weekend, and he had to move by the 1:00 pm check out time on that Friday. He had told me he was able to rent an apartment and would be off the site.

At noon on Friday I had seen no sign that we was getting ready to vacate the site. I went to his site and banged on the door for about five minutes. He finally came to the door, very obviously having just been woken up. He seemed very incoherent, but said he would start packing up. To make a VERY long story short, I had to call my boss because he was not moving.

To make the situation worse, the guy did not have a vehicle to move the pop-up off the site. His girlfriend had lent him her Jeep to bring the camper to Wisconsin and then had come and taken it back and left him his car. Supposedly, a friend was going to come and move it for him, but that didn't happen.

My boss, Dan, came with a county truck to move him, but we still couldn't get the guy to pack up his camper for the move. Eventually, Dan called the sheriff's department. An officer came and that got things moving. The camper was full of beer cans, and the guy definitely smelled like he had been drinking. The officer was very good about the whole thing and didn't write him any citations.

We got him moved to an overflow spot and got his camper set back up for him. He was so out of it, he couldn't do anything for himself. He started talking about "ending it all", so we were worried about him hurting himself. The sheriff's department sent another deputy to make sure he wasn't suicidal. By that time, he was a bit more coherent, so everything was okay.

The next morning his girlfriend from Iowa showed up with the Jeep. It is really quite a sad story. It seems he lost his job and his brother had died the week before. The guy was just at a very low point in his life. She got him packed up, and they headed back to Iowa. I sure hope everything works out okay for him.

Luckily, the rest of the weekend was busy but quite uneventful. We had friends camping at the park, so had a great time visiting.

The weather the last few weeks has been fantastic. I've been doing my morning walks, and saw this family of geese.

I've also been working on some quilts. This is one I finished for a friend of Korey and Cathryn who just had a baby. They are from North Dakota and big fans of the NDU Bison whose colors are green and gold. Hope they like it. 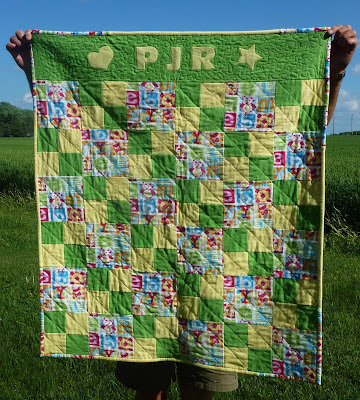 On Thursday I went to Eric's house and continued painting. The bedroom I've been working on is almost done. I'm painting the walls and the woodwork, so its taking some time. Before heading home, I stopped to watch his softball game. It was nice to see some of his friends. I've known these guys since they were in high school, and it's so nice to have them come up and give me a hug and tell me about their lives. Eric played a good game.

This week our park is only half full, so a bit of a reprieve for us. The rest of June, we are pretty much fully booked. Summer has definitely arrived.

Don’t wish upon a star – Reach for one!
Posted by RV Khronicles of Kevelyn at 7:22 AM 2 comments: