Temperatures in Phoenix have been above average for the month of March. On Sunday the high was 97 degrees which beat the record of 95. Today is supposed to be 95 degrees, another record beater. We have thoroughly enjoyed Arizona and its beautiful weather this winter, but it is time to head north for some cooler temperatures.

The good thing about the weather this month has been that as it is a “dry” heat, so as long as you stay in the shade you are fine outside. Also, it cools off enough at night so we can sleep with the windows open.

Last week the two baby hummingbirds in the nest were very active. I didn’t see the mother very much, but the babies were often sitting on the edge of the nest. Sometimes they fluttered their wings as if they were practicing. They were getting pretty big, and I’m sure the nest was quite cramped. On Monday they were gone, and I haven’t seen them since. It sure has been fun watching the nesting process. 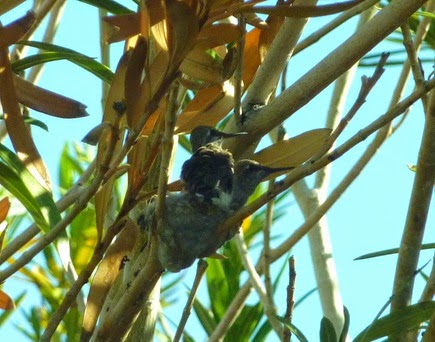 On Sunday we went to our last Milwaukee Brewers spring training game for the season with Janie and John. It was Chorizo bobble head giveaway day. Yesterday we went to a Arizona Coyote NHL hockey game.

Janie and John hosted several junior league hockey players in their home while their kids were growing up. They have lots of fun stories to tell about that time in their lives. They have seen many junior and minor league games, but had never been to an NHL game. They asked if we wanted to join them, and it sounded like fun. We have been to several Milwaukee Admirals games, which is a minor league team; but have also never been to an NHL game.

Before the game we wandered through the nearby outlet mall. I found some Sketchers shoes which I’ve heard are very comfortable. I’m going to give them a try. Then we headed to the Gordon Biersch Microbrewery and Restaurant. John, Janie and Kevin once again enjoyed some good microbrews at happy hour prices, and I enjoyed my cold ice water. We had dinner and then walked over to the Gila River Arena. The area outside of the arena was quite impressive. There were several fountains and lots of eating and drinking establishments. It looked like a fun place to explore. There were two of these gigantic inflatable Coyote hockey players. If you look to the right of him, you can see a woman to get a perspective of just how big he was. 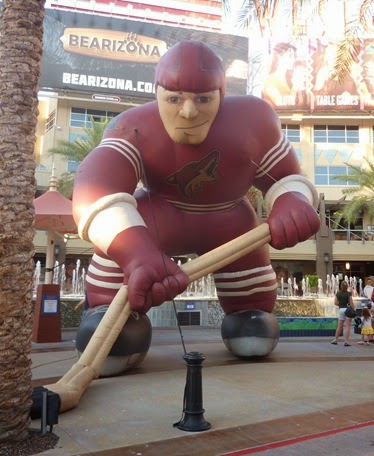 Janie had warned me that it might be cold inside so I brought a sweatshirt. I’m so glad I did. I would have been freezing without it. The air conditioning bill for the arena must be astronomical.

The Coyotes don’t have a good record this year. In fact, they’re in last place with just a few games to go. If they stay in last place, they get the first round draft pick, so I don’t think they were playing their best game. The Buffalo Sabres beat them 4-1. The arena was very impressive with an excellent sound system. 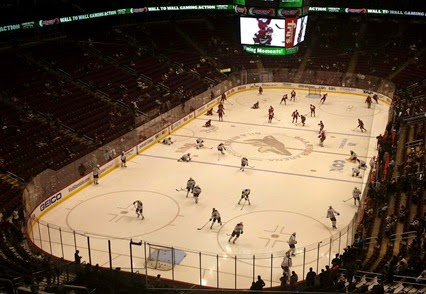 We sure have been busy doing sports type activities this month. We can now check off a Nascar race and an NHL hockey game from the sports bucket list. I think Kevin has been in heaven this whole month!

We sure have enjoyed spending time with John and Janie this month. We’ve had lots of laughs and are already planning for when we can meet up again in the future.

Tomorrow morning we leave bright and early. Our plan is to spend the first night in Albuquerque, New Mexico. The second night we’re actually going to stay at a motel in Fort Morgan, Colorado because they are predicting some snow and cold temps so we’re going to push it and get past Denver and the mountains. On Friday we plan to arrive at Pine Grove RV Park in Greenwood, Nebraska where we’ll stay for nine nights so we can visit with Korey and Cathryn.

We don’t normally like to push it this much when travelling, but Kevin wants to get there by Saturday so he can set up the dish and watch Wisconsin play in the final four. I sure hope they win after all this hurried travel. We also wanted to be in Nebraska by Easter so we can spend it with the kids. I can’t wait to see them again!

Posted by RV Khronicles of Kevelyn at 2:04 PM No comments: Links to this post