Yesterday Amazon had their annual Peak Kick-off event. They’ve had this event each of the three years we’ve been here. They set aside about an hour for some fun to reward their employees for their hard work during the peak season before Christmas.

They have a local marching band lead a parade of employees through the facility. The plant manager dresses as Santa and the other managers dress as elves and Santa’s helpers. They hand out candy, play some games and give out door prizes.

Each year we’ve been here the event has been on Wednesday afternoon between the day and night shift. That has been our day off, but we walk over to get paid an hour of overtime for attending. Yesterday they drew names for prizes including two 40” TVs, two Toshiba touch screen laptops, a few IPods, a $500 Wal-Mart gift certificate, and about 25 Amazon gift cards. My name was called for a $25 Amazon gift card. Cool!!

The first year Kevin won a Kodak camera. We already had a nicer camera, so I sold it on eBay for about $60. Last year I also won a $50 Wal-Mart gift card during a power hour event.

They hold several power hours per department during peak. Everyone who achieves 100% or better of their work target during a power hour has their name put into a drawing for prizes. I squeaked by with 103% last year during one of these and got lucky to have my name drawn.

So, I think we’ve been very lucky hear at Amazon. And, not only have we been lucky, but we had our first two week paycheck put into our accounts. After all, that’s what we’re here for. The bank account is happy, happy!

Last Sunday we drove to Cherryvale, Kansas to check out the Big Hill Lake Corp of Engineers Recreation Area. It’s a very nice area with a large lake. 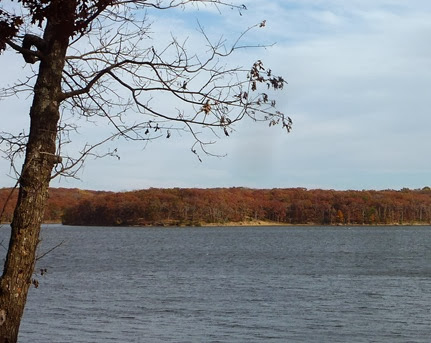 There was a nice campground with full hook-up sites for $20. Electric only sites were $17. We found a hiking trail that went along the lake. Although it was quite windy, the trees along the trail helped block the wind, and we enjoyed a great hike. I saw lots of beautiful trees in full fall color along the way to the park. However, most of the trees in the park were oak, so not much pretty color there.

Saturday we’re heading to Kansas City for an overnight visit with our son Korey and his wife Cathryn. We haven’t seen them since their wedding in August. They currently live in Omaha, so Kansas City is about half way between us. Since we won’t be seeing them for Thanksgiving or Christmas this year, we’ll be celebrating the holidays this weekend. I can’t wait to see them again!

Does anyone out there in blog land have any suggestions of things to do in Kansas City? We’re looking for ideas. I know there are supposed to be lots of fountains, so we’ll probably check that out. There’s also a microbrewery tour that I found so we might do that Sunday.

Posted by RV Khronicles of Kevelyn at 12:33 PM 4 comments: Links to this post