About 60 miles east of Las Cruses, New Mexico is the White Sands National Monument. It’s a 275 square mile area of white sand dunes. What an amazing site! White sand as far as you can see. Those spots in the left center of the picture are actually cars. 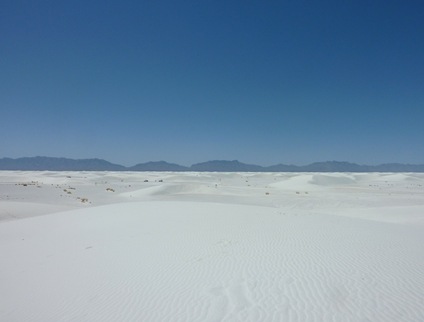 The sand comes from gypsum rocks in the surrounding mountains. Since there is no river to carry the run-off out of this valley, the rocks eventually crystalize and break down to create this amazing place, the largest gypsum dune field in the world!

There is an 8 mile road that takes you through some of the dunes. These pictures reminded me of Wisconsin with the sand blowing across the road and the plows creating piles along the side of the road. Except it’s 80 degrees. I like this kind of snow! 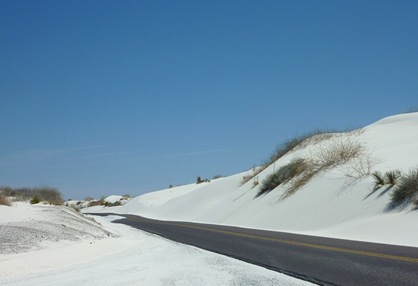 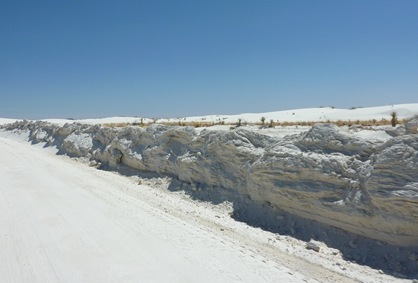 Lots of people were sledding down the dunes. There was a group of school buses at the picnic area. These kids were having a ball sliding and playing on the dunes. 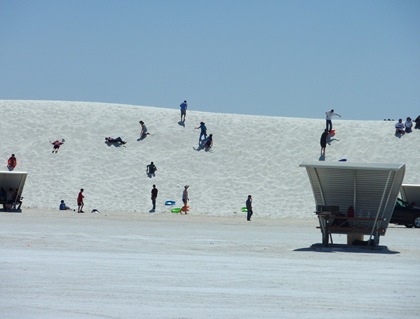 Each picnic table has a metal shade structure built over it. The sand is incredibly bright. Sunglasses are a must!

There is an amazing amount of plant life growing among the dunes. I’m always so astounded how plants and wildlife can exist in the most brutal environments. There is no water other than occasional rainfall.

The Yucca plants grow fast enough to stay ahead of the sand. The higher the dune gets, the higher the plant grows. Once the dune moves on, the plant is so top-heavy it collapses. Even though these yuccas at the top of the dune look like they are only a few feet tall, their roots are actually 30 feet down at the bottom under the dune. Amazing! 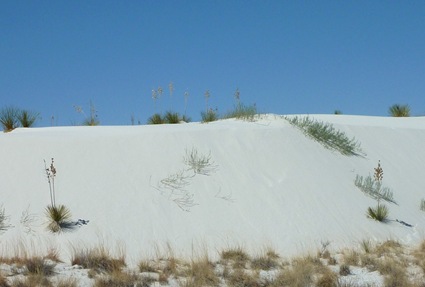 Bushes grow this complex system of roots. When the dune moves on, the plants hold onto some of the sand and create little islands to stay alive. 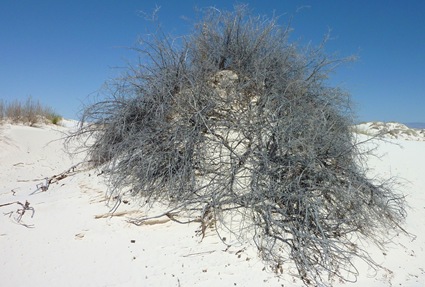 The Visitor Center is this gorgeous adobe building. It looked practically brand new. I was surprised to learn that it was actually built in 1936 during the depression by the Works Progress Administration (WPA), an organization similar to the CCC. 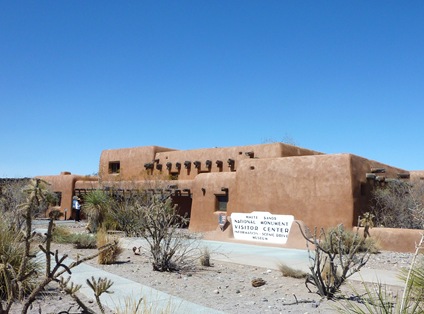 We stayed at an awful campground for two nights near Las Cruses called Western Sky's RV Park. It is a Passport America park. Last week they quoted me $16 a night on the phone, but then charged $19 claiming they had a rate increase. Most sites were occupied with old run-down trailers and appeared to be permanent residents. It was noisy from interstate traffic, dogs barking and an overabundance of doves that never shut up. We would definitely not recommend that place! I can’t imagine anyone actually paying the full price to stay there.

Today we traveled about 180 miles north to Bernardo, New Mexico. We’re staying at Kiva RV Park and Horse Motel for $13 a night, the Passport America rate. There are a lot of dogs roaming around, but so far they have not been a problem. I think the camp host owns five of them. There are a lot of birds at this park, too. I think the New Mexico state bird should be the dove instead of the road runner. We have yet to see a road runner, but we sure have seen and heard plenty of doves :)

The key to success is having dreams. The mark of success is living them. ~ Unknown

Posted by RV Khronicles of Kevelyn at 7:40 PM 2 comments: Links to this post