Today I’ll tell you a little about the actual cruise. I’ll do two more posts this week about the islands we visited.

We were on a fifteen day Hawaiian cruise that started and ended in San Diego. We spent a total of nine days at sea. We sailed on the Carnival Spirit with 2,200 passengers and over 900 crew members. We had a very good time, but there were some things we didn’t like so much. 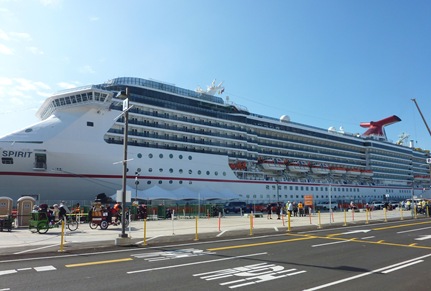 Prior to this trip, the ship was in dry dock for two weeks of refurbishing. Apparently, there were some issues getting everything loaded for the trip, and we ended up sailing at 11:00 p.m. from San Diego, six hours after the scheduled departure time. We were supposed to be able to board the ship at noon, but ended up waiting on the pier for two hours before we could board. This was the start of a number of delays. It seemed as though many events were not very well organized. It felt as though the staff were often running things by the seat of their pants. The captain was able to make up the time so that we arrived at Hilo on time.

This was the fourth cruise we’ve been on, two with Royal Caribbean and two with Carnival. The other trips were from four to seven days. I think that was part of why we didn’t enjoy it as much. Nine days at sea is a lot of time to fill, and it just didn’t seem as organized as other trips we’ve been on. One of the areas I felt was lacking, was the quality of the entertainment. Most of it was mediocre at best.

Another disappointment that had nothing to do with Carnival was the weather. While in Hawaii, it was near 80 degrees and sunny each day. However, almost all days at sea were cool and overcast. It was windy and cool on deck so lots of people were jammed into the covered pool area. We used the hot tub once and never swam in the pool. 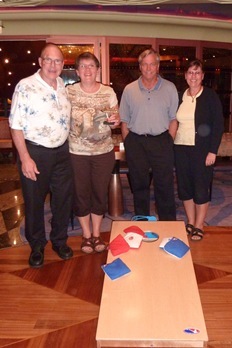 Overall, we did have a good time. We participated in bean bag toss, bean bag bocce, golf chipping, mini-golf (the ship has a nine hole mini-golf course), and some trivia events. Kevin won one of the bean bag toss competitions, and our team won a bean bag bocce event. So, each couple has a ship on a stick trophy.

Of course, there was an abundance of food. I enjoyed most all of it. Mainly, I chose the seafood entrees and was never disappointed. My only complaint about the food is that the steaks were not very good. From prime rib to fillet, the meat was tough and almost always overcooked. Kevin and I stopped ordering steak after a couple of disappointments. I have a feeling this may have something to do with the Steakhouse they have on board. For an additional $30 per person, you can eat there. I bet their meats are a better cut. We didn’t feel it necessary to pay extra for a meal when there was a ton of food available all over the ship. After fifteen days of all that eating, I actually was beginning to feel sick. Even if you try not to overdo, it’s almost impossible. I gained four pounds and Kevin gained eight. We’re planning on eating salads for a week and doing lots of walking.

Those of you who have been on a cruise know that the stewards leave towel animals on your bed each night. Here’s a sample of the ones we found. The service we received from our cabin steward and the wait staff was very good. 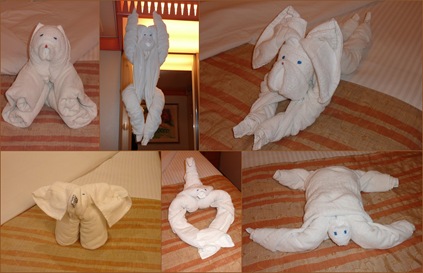 There were two formal nights where people got dressed up for dinner. The rest of the nights were cruise casual. Of course, there were constant opportunities to have your picture taken by a photographer. We did have some taken the first formal night. I ended up buying this one. 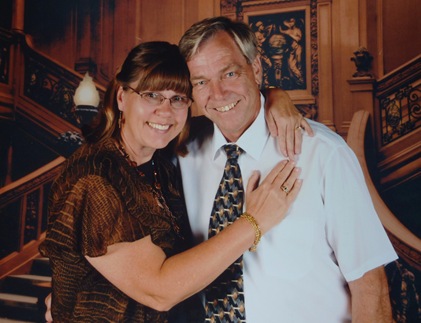 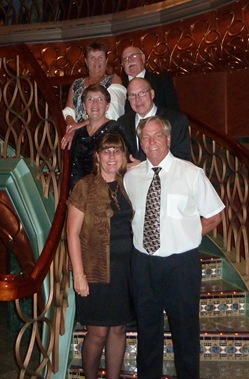 Tomorrow, I’ll tell you about our stops at Hilo on the Big Island of Hawaii and Maui. One of the main reasons we chose this cruise was the great price of $1,000 per person. Another reason was that we’ve been to Hawaii twice before, but never got to the Big Island. I really wanted to see Volcano National Park, and we were able to do that.

I would, however, not recommend a cruise for a first visit to Hawaii. By spending one day at each stop, you just don’t have enough time to experience the beauty and culture of the islands. One of the best parts of visiting Hawaii is taking time to enjoy the beach, relaxing and absorbing the “hang loose” culture of the Hawaiian people.

Today was spent unpacking and doing six loads of laundry. Right now we’re watching the Super Bowl. It hasn’t been too exciting. Although I really don’t care who wins, I’m hoping the Giants lose because they beat the Packers.

My favorite commercial so far has been the VW one with the dog and the Vader kid from last year. There was a Doritos one with a baby and grandmother that was pretty funny, too.

Posted by RV Khronicles of Kevelyn at 7:21 PM 6 comments: Links to this post