Yesterday was forecast to be a warm sunny day, so we decided to take a drive to the Land Between the Lakes area about 25 miles from Paducah. The Woodlands Trace National Scenic Byway runs through the middle of the land between Kentucky Lake and Lake Barkley.

On the way, we saw a sign for the Kentucky Dam Visitor Center and decided to take a look. It turns out that after the great flood of 1937, the government decided to dam the Tennessee River in this area to control the continued devastating flooding. Creation of the dam formed Kentucky Lake. The Barkley Dam on the Cumberland River nearby created Lake Barkley. The 170,000 acre narrow strip of land between these two man made lakes formed The Land Between the Lakes recreation area. I never realized these lakes were man made. It makes sense as both of them are long and narrow, not the typical lakes we're used to seeing.

Kentucky dam was completed in 1948 and is the longest dam of nine on the Tennessee River. Creation of the dam and reservoir involved the purchase of over 300,000 acres of land and displacing 2,600 families. 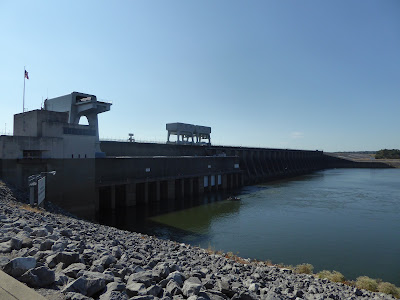 A large platform was built at the bottom of the hill in the lake for fishing. We also saw quite a few fishing boats near the dam. Must be a good place to catch fish. 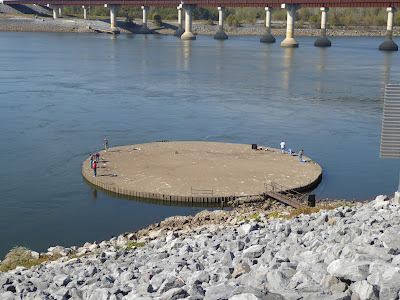 After visiting the dam, we continued to the scenic byway road. The Land Between the Lakes area has several places to visit including a 1850's living history farm, elk and bison prairie, planetarium and nature center. Each of these places has an entrance fee of $5 per adult. We weren't interested enough in any of them to pay the fee.

We did find a hiking trail through the woods to stretch our legs for a bit. It was just like hiking in the woods in many other places we've been, but a nice day to be outside and get some exercise.

We also stopped at Patti's Settlement in the town of Grand Rivers near the entrance of the Land Between the Lakes. It's an 1880's replica settlement. The buildings are very close together with lots of trees and foliage between them, so it was actually pretty hard to see what the buildings looked like other than the porches of each one. Lots of gift shops and restaurants; a typical tourist attraction. There was a nice gazebo where weddings are held. Miss Patti's Restaurant is famous for their two inch pork chop with special sauce; but at $24.99 per plate, we passed.

Fall foliage is just starting in this area. I think in a week or two the drive between the lakes would have been much prettier. It's pretty much just a wooded drive, so not really that much to see. There is plenty of primitive camping and boating opportunities; so if that's what you enjoy, it is probably a great place.

There are also some state parks in the area with many recreation opportunities. Back in 1990, we stayed in a very nice lodge at Lake Barkley State Park and played golf on their 18 hole golf course.

Today is a day of rest and football watching. Tomorrow we drive to Frankfort, Kentucky. We're there for a week and will be exploring Louisville, Lexington and Frankfort from that location.

Don’t wish upon a star – Reach for one!
Posted by RV Khronicles of Kevelyn at 9:01 AM 1 comment: Links to this post