We left Loveland, Colorado last Sunday. Normally, Kevin does not like to travel on Sundays because if there is a problem, we’re less likely to find repair places open. However, we had to drive through Denver, so he felt Sunday would be the best day to avoid heavy traffic.

We had an uneventful drive through the city. Traffic was not too bad. As we continued south, the Rocky Mountains were on our right for many miles. The combination of the snowcapped mountains and the colored leaves was amazing. I took this picture through the truck window, but you get the idea. 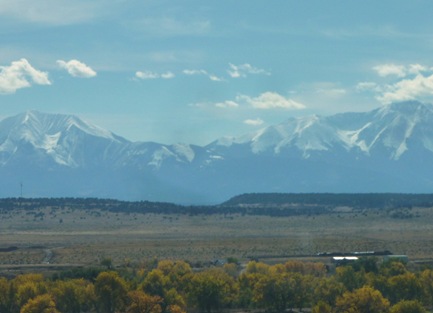 Just a few miles before the New Mexico border, a car came up next to us honking its horn. The nice lady shouted that one of our tires had pieces flapping off of it. Kevin pulled over and slowly made his way a short ways to the next exit. We never heard, felt or saw anything indicating there was a problem. 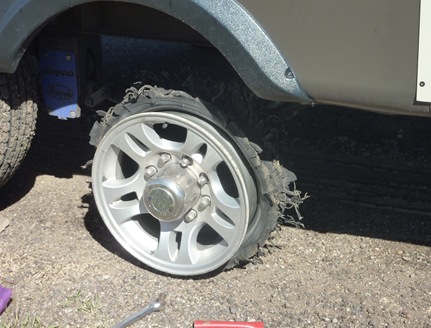 One of our tires was completely shredded, but luckily we had no other damage. Kevin was able to change the tire himself, and we were back on the road. We made it to our intended stop in Rotan, New Mexico and asked the campground owner if she could recommend a tire shop. She gave us two names, and we had to wait until Monday morning to call.

We’ve certainly had our share of problems with tires. Our last fifth wheel had two blowouts, both of which caused damage to the RV. Those were LT tires. Now, we have ST tires, and another blowout. I wish RV manufactures did a better job of putting proper tires on fifth wheels.

Kevin went to Mesa Tire in Raton on Monday morning and was happy to learn they had the correct replacement tire for us. He had noticed one of the other tires looked suspicious, so they told him to bring over the fifth wheel, and they would check it out. Sure enough, a tire on the opposite side of the blowout, was bulging, and needed to be replaced. They were super efficient, and had both tires replaced within 30 minutes. They also put the spare back under the RV.

I’ve begun the tedious process of dealing with the tire manufacturer for warranty coverage. I have to deal with two different people; one for the tires and one for the damaged rim. We have to take the tires to a local tire dealer, and then we’ll see what happens. They want us to bring in all four tires, as they want to make sure the other tires aren’t bad. When we arrived in Yuma, Kevin noticed a third tire looked suspicious, so we’re glad they’re checking all of them. We’ll see what happens.

We’ve heard pros and cons on tire pressure monitoring systems. Does anyone have any input on whether those systems are worth buying and reliable?

We had two more travel days ahead of us. We spent Monday night in Albuquerque at Enchanted Trails RV Park. This is a Passport America park, and we’ve stayed here several times. The first site they sent us to had a tree with branches that were too low, We were not risking damage to our roof, so back to the office to get a better site. We’ve run into this a few times at campgrounds. You’d think they would know which sites have low hanging branches.

Enchanted Trails has some vintage campers near the entrance. I think they can be rented. I thought this was a very cool combination. 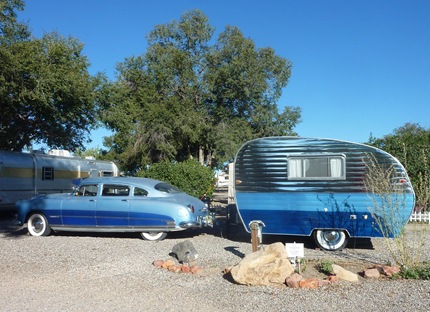 Tuesday night we stayed at Distant Drums RV Resort in Camp Verde, Arizona. We normally stay at Krazy K, but they were fully booked. Distant Drums had a couple of rallies going on, so we were lucky to get a site there. It’s a very nicely maintained park with paved roads and concrete pads at the sites. However, being as full as they were, it was quite tight getting down the roads. Most of the sites are back in. We  had one of ten pull-throughs at the end of a road. It was too short to park the truck on our site, but there was a parking spot nearby.

Wednesday we arrived at Fortuna de Oro in Yuma. We’ll be staying here for four months. Last year when we were here, we picked out an area we thought would be good for us. We like the site we chose. We were treated to a beautiful sunset our first night. 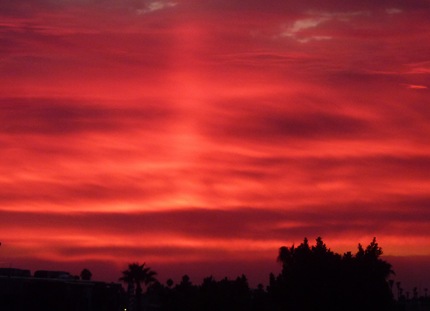 Yesterday we ran some errands, and got everything set up to our liking. Today Papi is coming to wash the RV, awning and truck for the fantastic price of $45. Our friends Janie and John will be arriving today. We look forward to seeing them again. Tonight there is a free Halloween dance at the clubhouse. We have a tee time for golf on Saturday morning, and are looking forward to playing pickle ball again.

Posted by RV Khronicles of Kevelyn at 9:27 AM 8 comments: Links to this post