Two days ago we had the air conditioner running because it was 86 degrees in Oklahoma.  Since leaving there, highs have only been in the 40s and the skies have been heavily overcast for two days.

I have a feeling we won’t be seeing 80 degrees for quite some time.  I guess there is always a trade-off for everything.  As we’ve been driving through Missouri and Illinois, I’ve been enjoying the views of green grass and the blooming Redbuds.  There are also some trees with white blossoms that are so pretty.  Even with the clouds, it’s been beautiful.

Here are some of the white trees zipping by.  You can see the bright green of the fresh leaves, as well. 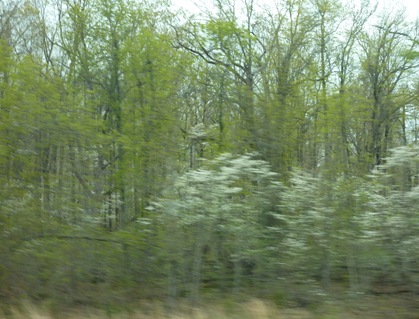 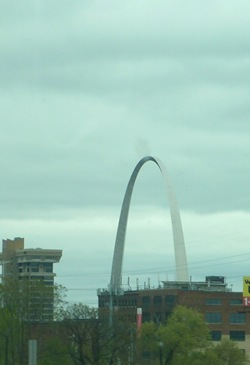 And, of course, no trip through St. Louis is complete without a picture of the arch.  We drove through St. Louis around noon today, and traffic was fairly light.  I’m sure glad we weren’t  heading south on I-55 into the city.  They were backed up for miles.

It was windy again today.  Unfortunately, it was now coming from the northwest instead of the southwest.  So, Kevin was fighting a head wind all day.  No more being pushed along from behind.  Our gas mileage sure wasn’t good. In fact, it was so windy that it pushed our step down while we were driving.  Kevin had to bungee it to keep the wind from blowing it down.

We are spending two nights at the Illinois State Fairgrounds in Springfield.  The rate for 55 and older is $20 a night for a FHU site with 50 amp electric.  They also have free Wi-Fi which works great.  Some sites are on asphalt parking lot and some are on grass.  It’s quite muddy so we chose the asphalt.  We will definitely keep this place in mind for future trips back to Wisconsin.

There were some tornados and heavy storms in central Illinois last night.  It feels like we’ve been tip-toeing between storms.  All we had was rain all night in Missouri.  Nothing serious.  It appears the severe weather will not be a factor for us between now and Monday when we reach Wisconsin.

We did see on weather.com that it is expected to be in the 40s all next week with clouds and rain.  Why are we going back there?? I guess seeing family and camp hosting are good reasons to return.  Hopefully, the weather will improve sooner than later :)