A week ago today I sprained my ankle on a hike. So, this past week we’ve been pretty much sitting around at home.

One of our fellow hikers sent us a few pictures so we could see what we missed. Here’s a piece of the plane that’s up on the side of the mountain. Apparently, the plane exploded upon impact, so there aren’t big fuselage pieces. 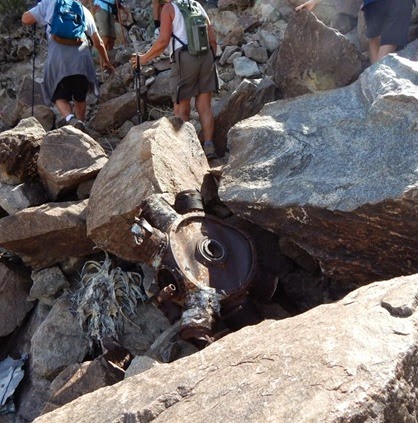 And here’s a picture she took of the group at a rest stop. This was just a few minutes before I fell. I’m on the left with the red backpack. I actually wasn’t feeling well at this point. I had begun to feel nauseous. I think I was a bit dehydrated because I drank a bunch of water and felt immediately better. It probably would have been smart to turn back at this point, and I could have saved myself a lot of hassle. 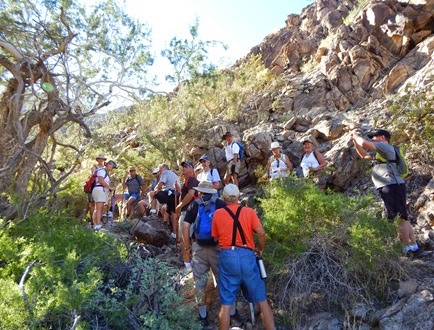 As you can see on both of these pictures, we were in a very rocky area. It sure was tough hiking back down with a sprained ankle.

Here’s a picture of my ankle. Hopefully, its not too gross to show. The other side is just as purple. The swelling has gone down quite a bit, but it is still very sore. I think it’s going to take quite a while to be back to normal. 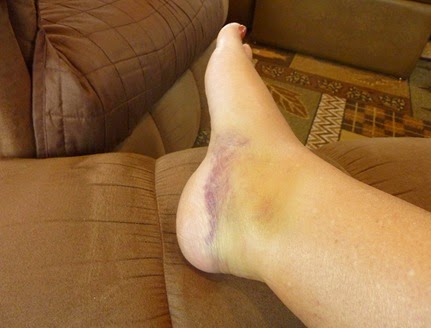 On Saturdays we’ve been golfing with a group of friends. Last Saturday Kevin wanted to golf, and I wanted to get out. Our friend Cathy was kind enough to let me ride along in her cart. After golf, Dick and Wanda and Bernie and Cathy came back to our park for a Burger Bash and classic car show. The burger was very good. There sure were a lot of people at the park to look at the old cars.

All of that activity caused my ankle to swell quite a bit, so we came back to our fifth wheel so I could elevate and ice it.

This week the plan is to keep resting my ankle. I may do some sewing, but that’s about it. We have lots of plans for the month of March in the Phoenix area, so I need to be good and stay off the ankle. I sure hope it’s a lot better in a few weeks.

Posted by RV Khronicles of Kevelyn at 12:14 PM 3 comments: Links to this post