Yesterday was our 33rd wedding anniversary. We celebrated with a steak dinner and a bottle of champagne. It was gooood! This is a year of double digits. It’s 33 years on the 11th and we were married in 1977. Also, Kevin turns 55 later this year, and he was born in 1955. I think that must be an omen of a good year ahead :) 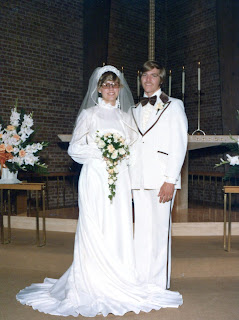 On Thursday, I donated blood at a Red Cross blood drive in Columbus. I just happened to see some signs in town last week, so thought I would go and help out. In the past, it has been a 50/50 chance if I could donate. My iron counts are always borderline. But, I ate some tuna for lunch, and my iron counts were just above the acceptable level :)

I was surprised how many people were there to donate. When I have attended other blood drives in “the big city”, there were never more than a few people donating. Small towns do seem to have a volunteer frame of mind. The best part was they had Culver’s custard for a treat at the end. I do love that Culver’s custard!!!

Our weather has been quite rainy lately. This area is already 2 inches above the average rainfall for the month of June and today is only the 12th. With all the rain comes a lot of humidity. I fear the mosquitoes are not far behind :)

I would guess the campground is only about half full this weekend. We did rent a canoe and kayak this morning. I’m thinking it will be a pretty quiet weekend.

Wishing everyone a great weekend!