Another Hike and Baby Doves

I had read in one of the local newspapers about a new park that opened this past year just a few miles from us. It's in Buckeye and called Skyline Regional Park. We decided to check it out last week. There was an entry booth, but no one was manning it. I have a feeling that it is free now because the park is new and not all trails are completed. Once it is finished, I think there will be an entrance fee similar to the other regional parks in the county.

We discovered a few trails, all of which had some elevation gains. Most were rated as moderate, although from what we could see they were wide and did not seem too difficult. By the time we started hiking, it was around 10 am and already quite hot. So, we went part way up one of the trails and then turned around. Here's the view of Buckeye from the trail. The Phoenix area always seems to be surrounded by haze. I think it is pollution as the area is in a valley. 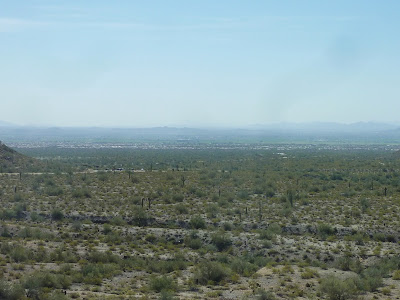 Some of the plants were blooming, which was a nice bonus. 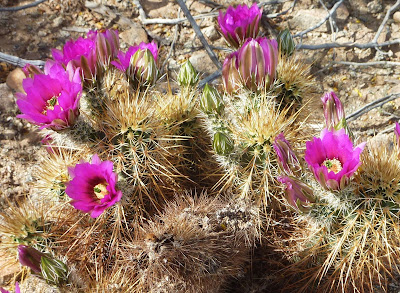 A mourning dove has built it's nest in a palm tree right outside our front door. I've never given much thought to these birds other than to be annoyed by their early morning cooing at times. It has been fun watching the parents care for the eggs and then the babies.

I never noticed that the eyelid of a mourning dove is a beautiful powder blue color. You can see the blue around the outside of the eye is this picture. When it blinks, the entire eyelid is the same pretty blue color. 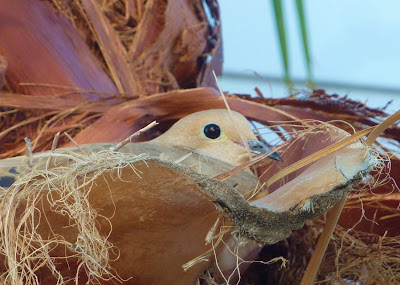 The nest was built in the lip of a palm frond that had been cut from the tree. It seemed like the babies or nest would slide right off, but they've managed to hold on.

Two babies hatched. Here's one of them shortly after hatching. I think the second one may have still be in the egg at this point. You can click on the picture to enlarge and see better. 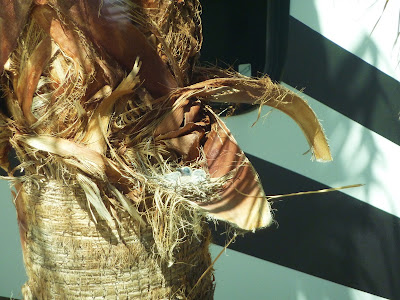 The babies grew remarkably fast. Within a few days, there were already this big. It's interesting watching the mother feed them. It looks like the babies are sticking their heads down her throat and there is a lot of bobbing up and down. 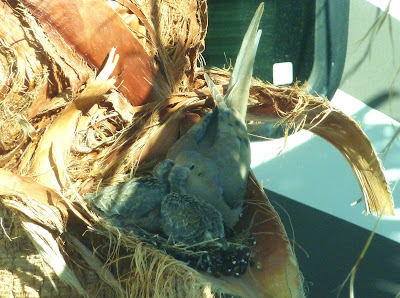 The mother seems to be gone for longer periods of time now. Its amazing to me that all three of them still fit in the nest without her suffocating them. I think they may be learning to fly soon. 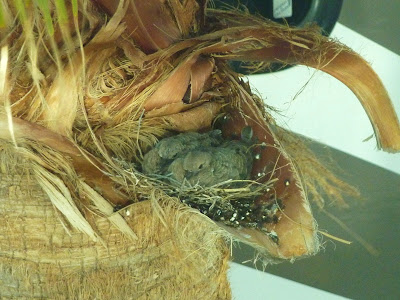 There is also a hummingbird nest in a bush behind our site, but I haven't been able to get a good picture through the fence. The hummingbirds fascinate me. The nest is smaller than a shot glass.

On Monday we attended our fifth Brewers spring training game. That's enough for another season. They won four of the games we attended, and we feel hopeful about the team and its future. Many new players, but they were looking pretty good.

Yesterday Kevin called me outside to see a bug that had plopped from above onto our mat. The pen is for size comparison. I don't know what it is, but I would not be happy if I had found this inside. 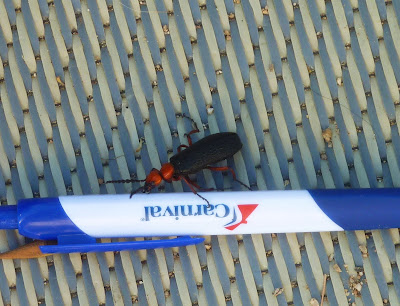 Our weather has cooled down a bit to a very comfortable 80s during the day. It's hard to believe another winter in the south is coming to an end. In just a little over a week, we'll be heading north again. Sure hope the snow is gone before we get there!

I've been working on some baby quilts this winter to give to our daughter-in-law, Cathryn to use a baby gifts for friends. Here are two that I finished recently. 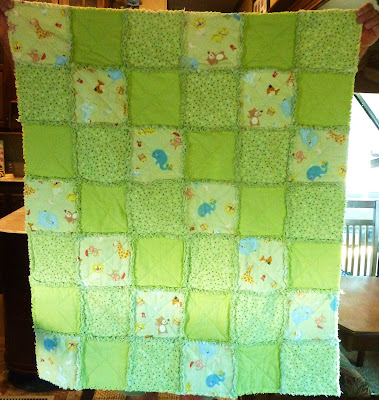 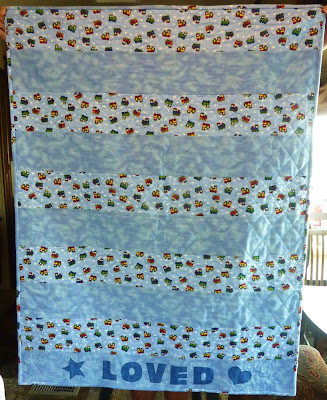 Don’t wish upon a star – Reach for one!
Posted by RV Khronicles of Kevelyn at 10:09 AM 1 comment: