The Sun is Finally Shining

I remember reading a comment a few years ago on another blog by someone who didn't want to be reading about what the weather was like. Living in an RV full time and working at a campground makes the weather an important part of our days, so I'm going to talk about the weather once in a while. Hope that doesn't bother anyone :)

The sun is finally shining today. We haven't seen it since last Sunday. This has been an odd weather season so far. Record snows in April. Record rains in May. Above average rain so far in June. When it has gotten warm, it has gotten very hot with super high humidity. Just not very nice weather for campers. I'm very much in tune with the sun. My mood definitely improves as soon as the sun comes out. And, spending the winters in Yuma, where they claim to have 330 days a year of sun, has spoiled me a bit.

In other news, we spent a very nice Father's Day with our son Eric. We had lunch at the Ale House in downtown Milwaukee where Eric and Kevin tried some of their brews made by Milwaukee Brewing Company. Both of them agreed they liked the Weekend @ Louie's the best. 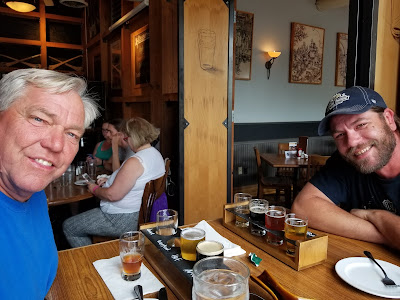 Our second stop was at the Lakefront Brewery for some more tasting. They have these interesting art pieces out front. The tops of some of the old brew kettles were painted to look like the three stooges. 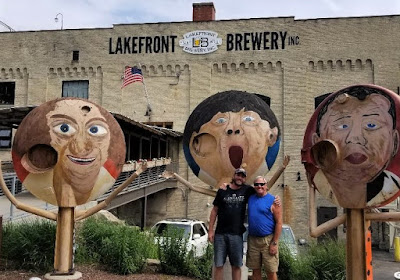 More beers were tasted. They both agreed they liked the beers at Milwaukee Brewing Company better. We didn't go on the tour, but our son Korey told me that the tour at Lakefront Brewery is very interesting. Maybe another time.

I've been working on some quilting projects. I made two of these wall hangings. One for the quilting room at Fortuna de Oro and one for the wall in our new park model. I found the fabric at a quilt shop in Mesa and couldn't resist. 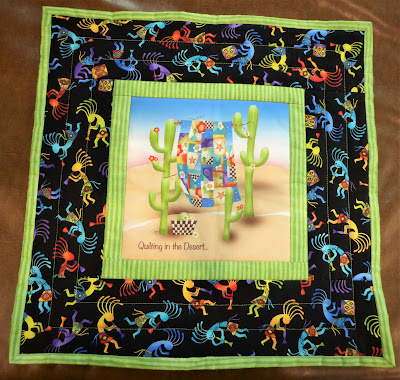 This quilt was started last winter while in Yuma. The pattern is known as a Bargello. There are many variations of the pattern, but it involves cutting many strips, sewing them together, and cutting them again crosswise to make the different colored squares, and then sewing them together again. It is the largest quilt I've ever made, a king sized for our bed in the park model. I quilted it myself on my small sewing machine. I'm quite happy with how it turned out. I have some strips left over, so I think I might make some pillow shams. A few weeks ago we saw two young raccoons wandering around the park during the daytime. We very rarely see raccoons in the park. We thought it was kind of strange to see them during the day and to not see an adult near them. We saw them a few times, but haven't seen them lately. Hopefully, they're okay. 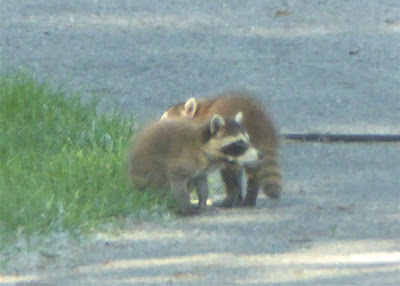 Time is going fast again this summer. We've been here two months already. A little over three more months until we head back to Yuma. We've been enjoying ourselves visiting with family and friends and enjoying our beautiful park.

Don’t wish upon a star – Reach for one!
Posted by RV Khronicles of Kevelyn at 7:45 AM 3 comments: Links to this post