Our original plan for yesterday was to ride the shuttle around Port Aransas to get a feel for where everything is located. There is a stop next to our RV park, and the shuttle comes once an hour. We sat down on the bench and waited. The shuttle came and went right past us. The driver never even looked at us. What’s up with that??

So, we started walking. We found the visitor center and were informed that you have to stand up and wave down the shuttle drivers. Lots of people just use the benches to rest so the drivers don’t stop if someone is just sitting there. Today we’ll try again and you can bet I’ll be waving my arms like mad. The shuttle is 25 cents each time you get on. Not a bad deal if you can catch a ride.

We ended up walking around town for almost three hours. There is a very nice park along the ship channel on one side of the island. This is also where you can catch the ferry to the mainland. We saw a motorhome and small camper, as well as several large trucks and many cars on the ferry. The people at the visitor center told us that heavy vehicles are sometimes not allowed on the ferry if the tide is low. When we leave here, we’ll probably just go back the way we came over the bridge in Corpus Christi.

This picture was taken from the observation tower in the park. Two of the ferries are crossing in the back. There is a nice fishing pier. 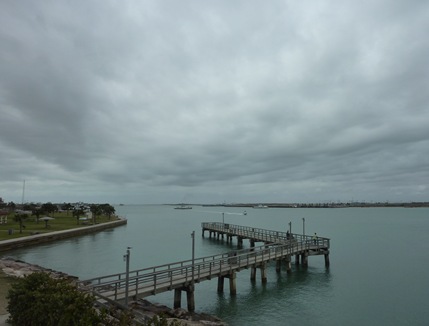 Lots of people were fishing from the wall. There were many pipes for them to put their poles into. It didn’t look like they were having much luck though. 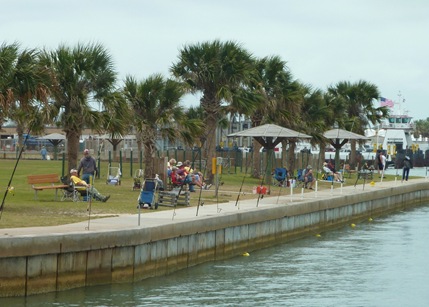 There’s a very nice marina as part of the park. 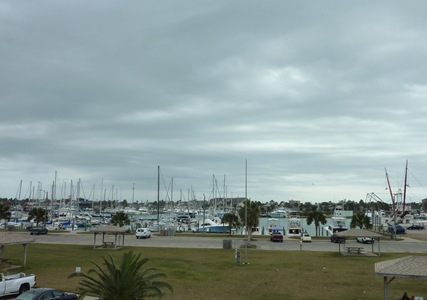 These pelicans were enjoying the day as well. 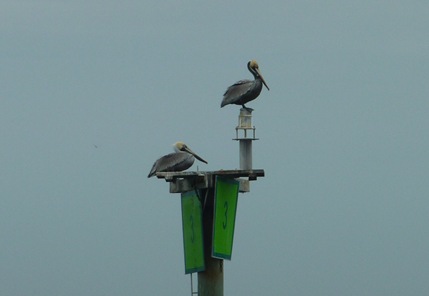 We passed a restaurant with this very cool sand sculpture outside. They had a sign explaining that they had started this sculpture in October. As a section is finished, they spray it with a mixture of water and Elmer’s glue. The sign also said that “kids, kreeps, klimate and kyotes have an adverse affect on the sculpture”. Funny! 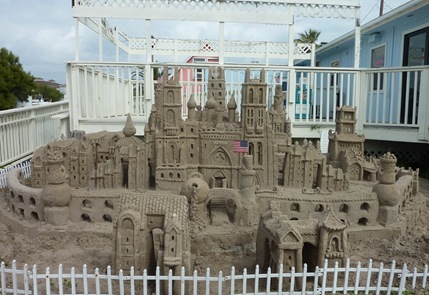 Many cities have some type of statues representing their town. I think it may have originally started with cows in Chicago. Port Aransas has boats made out of concrete and then decorated. I believe there used to be a boat building company here called Farley Boat Company. The same restaurant had this boat with a sand sculpture inside of it. 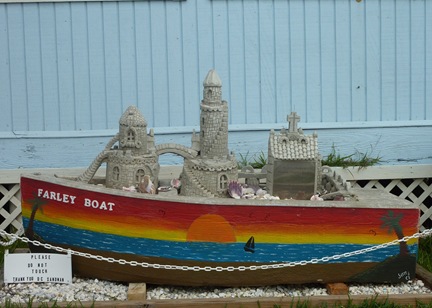 Of course, there are plenty of souvenir shops along the main drag. This is certainly a big shark. The shop in the background was called The Lighthouser. 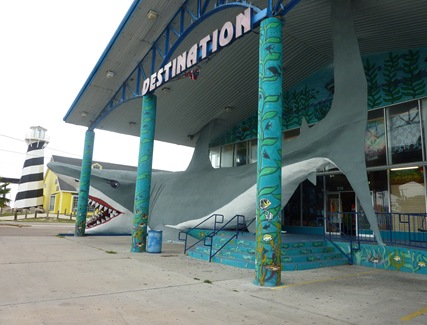 Pretty much everything in town is within walking or biking distance from us. We’re really liking the feel of this town. Its very laid back and has the feel of a tropical island. Not at all what we were expecting in Texas. I can’t wait to explore the beach!

Who knows, maybe we’ll stay put and purchase this RV on pontoons :) 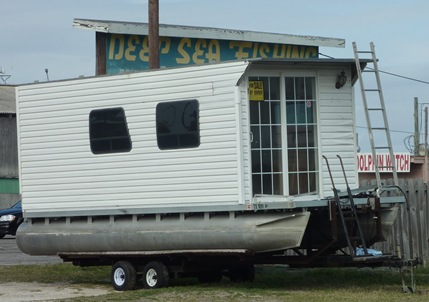