A couple of weeks before arriving in New Orleans, I had found a Groupon deal for a two hour walking tour of the French Quarter with Magic Tours. I made reservations to do the 4:00 pm tour on Monday afternoon. The tour never happened, but we still had a good time exploring the French Quarter.

We left the RV park around noon and parked in a lot about two blocks outside of the French Quarter for $5. The campground owner had told us about this lot, and it is definitely a bargain. Parking in the area is very expensive.

Driving around New Orleans we have seen quite a few condemned or abandoned houses with numbers spray painted on them. These houses are casualties of Hurricane Katrina which hit New Orleans in August, 2005. From what we’ve seen so far, New Orleans has lots of very old buildings, and seems to have many areas struggling economically. 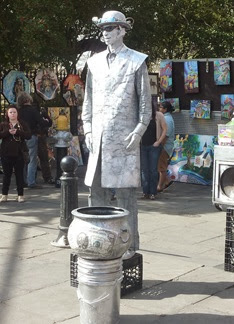 We wandered through the French Market which had the typical tourist stuff for sale. If you want a t-shirt or an alligator head, this is the place to buy it. Prices were definitely better than in the shops. We walked along the riverfront for a bit, and then continued walking along Decatur Street which has many shops and restaurants. We saw quite a few street performers and also a number of panhandlers.

If you look closely at the above picture, you can see paintings along the fence in the background. That is Jackson Square, which is a park near the center of the French Quarter near the Mississippi River. Many artists gather around the square to sell their artwork. There were also quite a few fortune tellers set up near the square. The square was the location where in 1803 the US flag flew for the first time in the Louisiana Territory. 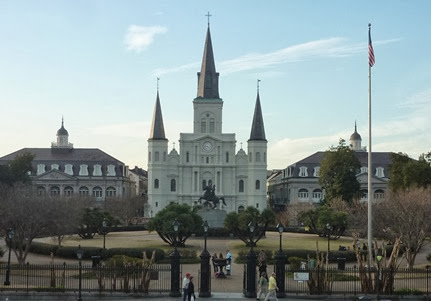 The square was originally called Place d’Armes, but was renamed in 1856 for the hero of the 1815 Battle of New Orleans Andrew Jackson. There is a statue of him on a horse in the center of the park.

The church behind the square is St. Louis Cathedral. The first local parish church was built on this site in 1727. The church was destroyed along with three-quarters of the city in 1788. Since then it has been rebuilt a few times. The current façade was added in 1851.

We had lunch at Crescent City Brewhouse. We had a coupon for a buy one, get one free lunch entrée. I had crawfish etouffee and Kevin had shrimp jambalaya. Both dishes were good, although a bit spicy for our virgin northern pallets. Kevin also enjoyed a glass of Weiss and IPA beers. Even with the coupon, our bill was $40. New Orleans is a pretty expensive place.

After lunch we wandered around a bit more. We made our way to Bourbon Street. We passed Jean Lafittes Blacksmith Shop, the oldest bar in the country. It looks like an old blacksmith shop although I overheard a tour guide saying they actually never forged anything there. It was a front for pirates to get together, drink and do business. 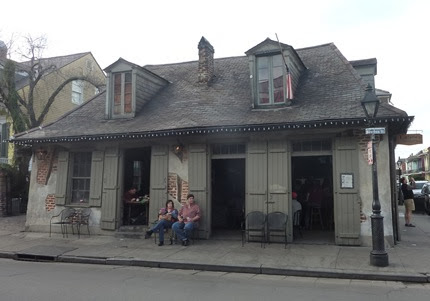 We walked all along Bourbon Street from one end of the quarter to the other. Lots of bars and strip joints. In 1997 we flew to Biloxi, Mississippi for a 20th anniversary trip. On that trip, we drove to New Orleans for one day. That day happened to be Halloween, and Bourbon Street that night was a crazy place to be. It was pretty mild this time. We are planning to come back with our boys on Saturday evening, so we’ll see what that’s like. This will be a new experience for them. 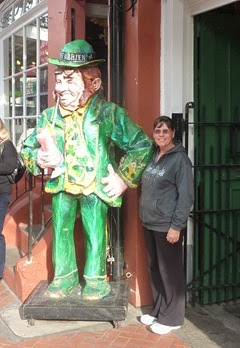 Here I am with my pal Pat O’Brien. The Hurricane drink originated at this bar in the 1940s. On our trip here in 1997, I had my first Hurricane. It left me rather tipsy as there are 4 ounces of rum in it, yet it tastes like fruit punch and goes down very easy! I may have to try another one Saturday night.

We arrived at the appointed time and place for our walking tour. The guide, however, did not arrive. I called the company, and the guy on the phone couldn’t reach the guide. So, no tour. Magic tours had many great reviews online, so hopefully this was just one of those things. I called them back the next day, and he didn’t explain what happened, just that the guide was fine. I rescheduled for Saturday with our boys, and they are giving us the same Groupon deal for the two extra people. Hopefully, the guide shows up this time.

On our way back to the truck, we walked along the riverfront again. The Carnival Eclipse was leaving the port heading down the river. We’ll be on the Sunshine on Sunday. After looking at a map, I learned that the river flows quite a ways from New Orleans before it reaches the Gulf of Mexico. It should be fun standing on deck as we cruise along the river. 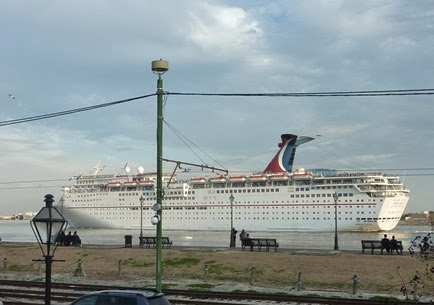 Now I just have to hope the weather cooperates so both boy’s flights are not delayed or cancelled and they arrive safe and sound on Friday. Can’t wait!!