I’m writing to you tonight from a motel room in Racine, Wisconsin.  Does that tell you how our day at the RV dealer went?

Several times this summer we have had water leak into the camper in two different places; in the bedroom slide and in the big slide with the dinette and couch.  It doesn’t happen every time it rains, but the floor has been soaked a few times when it rained heavily.

Our warranty expires at the end of October so we really wanted to get this taken care of before we leave in a few weeks.  We also had to have our awning fabric replaced as it developed a tear in early June.  It took some doing to get the awning fabric ordered and schedule an appointment.  I’ve been working on getting this appointment since June.

When I called yesterday to confirm, the service advisor told me she only had us down to replace the awning fabric, and they wouldn’t have time to look at the windows.  I called back and asked for the service manager.  After explaining my situation, he assured me they would look at our windows and see if they could figure out where the leaks were coming from and hopefully fix them.

We were there when they opened.  At 2:00 pm we got a call asking us if we had a place we could stay tonight.  The good news was that the dinette window leak was fixed.  The factory had installed the sealing strip incorrectly.  It had “rolled over” and water was getting in.  They took out the window and replaced all sealing strips and sealed it shut.  The awning fabric was also being replaced.

The problem came in the bedroom.  When the camper was built, the factory didn’t attach the slide wall to the floor on one side.  That’s where water was leaking in.  In order to fix it, they have to pull the entire slide out and remove the bed.  The factory couldn’t tell them how to get the bed out.  What’s up with that!  Glenn, the technician, told us he would figure it out and would make sure it was properly fixed and better than new.  The job was estimated to take 6 to 8 hours.  So, here we are in a motel room.  They expect to have it done by tomorrow afternoon.

We’re fortunate our camp host employers are so understanding.  They were very gracious about our being gone most of this week getting this taken care of.  I just hope it will all be fixed properly, and we are done dealing with it!

In other news, the weather has been absolutely perfect the last few days.  Highs between 75 and 80 with low humidity and sunshine.

We had tickets for a Milwaukee Brewers baseball game last night.  We went with our son, Eric, and his friend.  We had a very nice time even though the team lost.  It hasn’t been a very good year for them.

For many years Kevin and Eric had a 20 game season ticket package.  This is the first year they didn’t renew.  The tickets last night were free from the club as an incentive to try to get them to buy season tickets next year.  In this new life, that’s one thing Kevin has let go.  We don’t know where we’ll be next summer.

Yesterday we found a path at the campground that led to Lake Michigan.  It was a nice walk with a beautiful view. 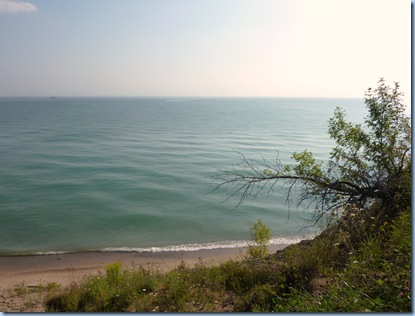 While we were waiting for the camper to be repaired today, we went on a tour at the Jelly Belly Factory.  Jelly Belly’s are gourmet jelly beans.  The tour was free, and it was interesting to learn how they make the candy.  Of course, the free samples at the end were fantastic.  I forgot my memory card for the camera, so the picture I took is in the internal memory of the camera.  The cord is in the camper so no picture tonight.  We didn’t buy anything.  $9 a pound for candy isn’t in our budget :)

Hopefully, tomorrow brings some very good news about the camper.  Then, its on to the task of getting the satellite dish fixed.  We have an appointment with DirecTV to come out Friday morning and take a look.

All of this still beats going to work :)

Hope everyone is enjoying the fabulous full moon tonight!

Posted by RV Khronicles of Kevelyn at 9:19 PM 5 comments: Links to this post