It's been a month since my last post. We've spent that time enjoying ourselves here in Yuma!

In my last post, I mentioned that we would be playing night golf. It was a lot of fun, but I was surprised how discombobulated it made me feel. The resort did a great job placing glow lights along the course, so there was no problem finding our way around. However, when it came time to hit that ball, my brain had a hard time figuring it out. A few times, I actually felt some vertigo. It was still a great time!

Last week 36 of us headed out into the desert for the first group hike of the season. We did a total of about 5 miles, so got a good workout. If you look closely, you can see the line of hikers snaking all the way back over the ridge in the photo. Kevin is in the middle wearing the gray sweatshirt. (Click on photo to enlarge). 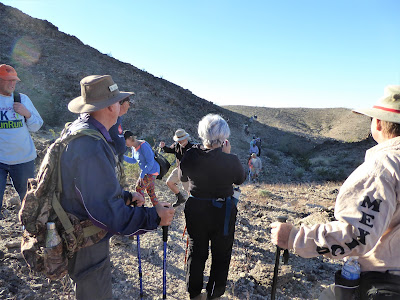 On Thursday afternoons, we play in a Bocce Ball group. Everyone brings an appetizer, we eat together, and then we play 2 or 3 games of Bocce. There are artificial turf courts here, so it's a little different than the Bocce games we played in Wisconsin. It's a lot of fun, and a great way to meet new people.

Sunsets in Yuma are often spectacular. Here is one we saw at Bocce. 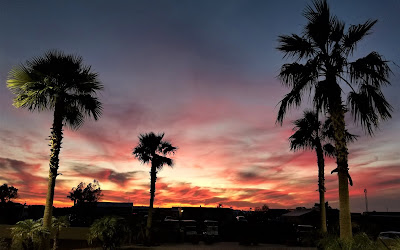 And here is another one from last week. 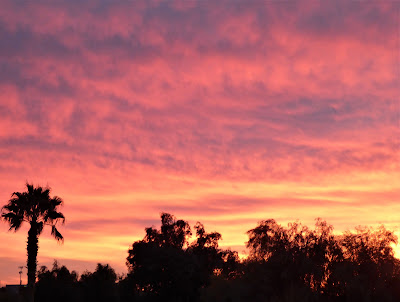 Last Thursday was the food drive in the park. A guy named Keith has been organizing this event for the past 26 years at this park. He was hoping with this year's donations to get to 100,000 pounds of food collected in that time. WOW!!! They asked Kevin if he would help this year, and if they could use our truck to pull the trailer around picking up the donations. Kevin was happy to do it. Thursday turned out to be a cold, cloudy day with rain predicted. Luckily, there was only a little drizzle a few times during their collection time. 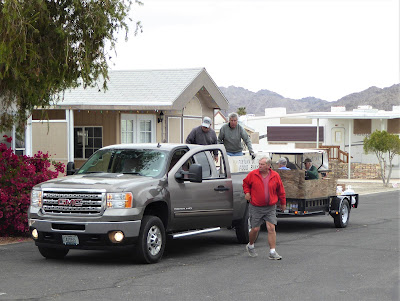 That night it rained almost an inch. Yuma has certainly gotten more rain than normal this year. The next morning the mountains were shrouded with clouds and fog. Not a site we have seen here before. 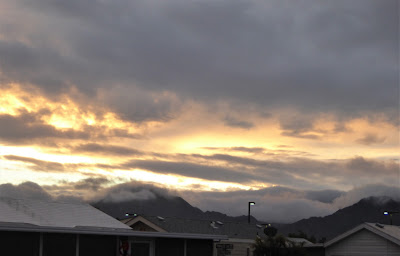 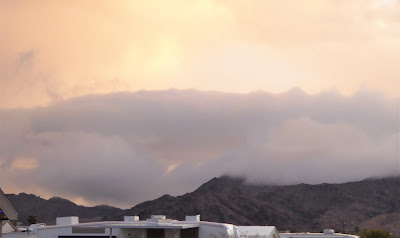 The sun doesn't stay away for long though. Soon it was back out, and we were enjoying a nice day again.

I've been busy sewing with the quilting group. I also joined the woodworking class. This is my beginning project after the first class. I might just get it done before the end of the season :) 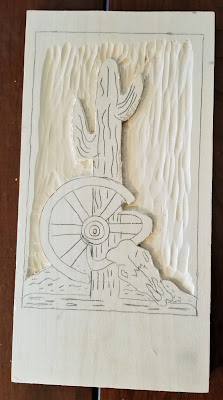 The windows that were ordered for our remodel are done. Tomorrow the contractor is coming to begin work. That's what I'm keeping my fingers crossed about. We've observed that work around here does not get done at the pace we are used to seeing in Wisconsin. It reminds me of what they referred to as "island time" on some of our vacations. It is definitely a different way of doing things. The plan is they will be doing the messy inside work while we are in Wisconsin this coming week. I sure hope that is what actually happens.

We leave for Wisconsin bright and early Tuesday morning. I am so looking forward to seeing our family again. I do miss those kids of ours!!

Don’t wish upon a star – Reach for one!
Posted by RV Khronicles of Kevelyn at 8:53 AM 2 comments: