The weather this summer has been quite nice. May and June were pretty wet, but since then it has been mostly dry and not very hot. This week the heat of summer caught up with us. We’ve had highs near 90 and dew points in the 70s. The next few days are predicted to be in the low 90s.

Our new fifth wheel has two air conditioners. Until this week, we’ve only needed to use one at a time. Our camp host site only has 30 amp service, so we weren’t sure if we’d be able to use both airs. By putting the hot water heater and refrigerator on propane, we are able to run both units during the worst of the heat for a few hours. We don’t want to do this much on 30 amps because we don’t want to stress our equipment, but it definitely helps during the worst of the heat.

I’ve been working on some new quilt projects. I can’t show you some of them until after Christmas, but here is one project I made for myself. It fits nicely on the ledge in front of the living area TV. 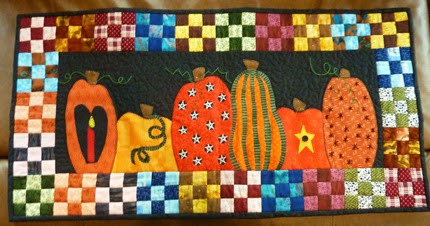 Several days ago we had a late afternoon rain shower. It wasn’t much, but we did enjoy a beautiful rainbow afterwards. I like how the rainbow looks over the corn field behind us. 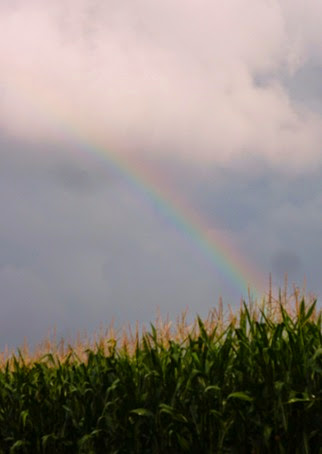 Last weekend Kevin was sitting outside and this butterfly visited him for several minutes. It just sat on the grass with it’s wings spread wide. I went inside and got my camera and got a very nice close up. Not sure what kind it is, but it sure was pretty. 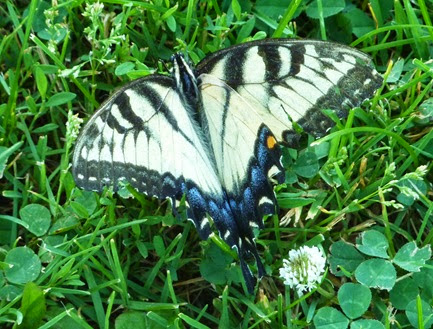 The campgrounds is nearly full this weekend. Next weekend is Labor Day, and we are almost fully booked. Several of our friends will be camping at the park for the weekend, so it should be a good time. And, the heat is predicted to be gone by then.

The summer sure is flying by. I can’t believe it will be September in a few days. In about six weeks, we’ll be hitting the road again.