Another Day of Sightseeing

After a good nights sleep and our free continental breakfast this morning, we continued our sightseeing trip.

Our first stop was the Chapel of the Holy Cross. This chapel was the inspiration of architect Marguerite Bruswig Staude in the 1930s. She visited Europe looking for sites, but found the perfect spot while on vacation in Sedona. Frank Lloyd Wright collaborated on the project. It was completed in 1956. What an inspirational and beautiful site. 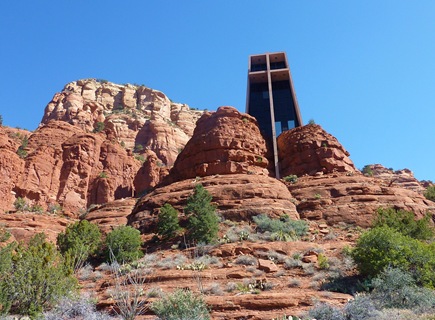 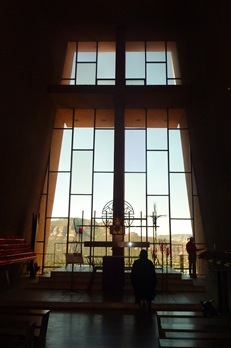 The view from the top is equally amazing. There were some very pretty fountains and flower beds around the building. Definitely worth the hike up from the parking lot.

The area surrounding the chapel seemed like the more affluent area of Sedona. This little house was down the hill. Notice the pool and fountains. 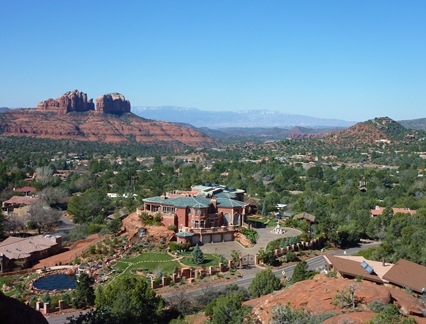 We continued on 89A. Our next stop was Tuzigoot National Monument in Clarkdale. We’ve been to quite a few of these Pueblo Ruins in the last two years, so we didn’t spend much time here. I stamped my National Park Passport book and took a quick look around. Kevin stayed in the truck. He’s had his fill of rock walls :) 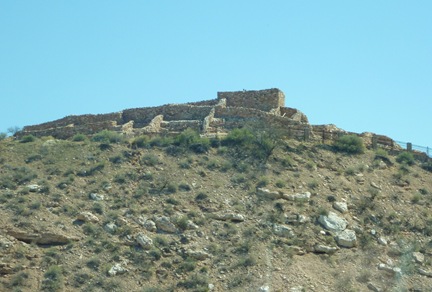 A few more miles up the road is the town of Jerome. I found the history of this town fascinating. It’s built right on the side of Cleopatra Hill. The houses are built at about 5,000 feet elevation on a hill with a 30 degree incline. Each row of houses looks down on the roof of the house below. I can’t believe they thought it was a good idea to built at that incline. There were times when blasting from the mines actually caused entire houses to slide down the hill. 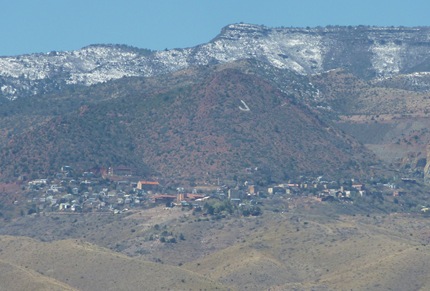 The streets are very steep and narrow. The town was established in 1876 as a copper mining town. Mining continued until the 1950s with over $1 billion worth of copper being mined. At its peak the population was over 15,000, mostly men. As you can imagine, saloons, brothels and gambling were prevalent.  A New York newspaper called it the wickedest town in America.

After the mines shut down, the population dwindled to about 50 hippies. The town is now a National Historic Landmark and has become a tourist area as well as an artist community. It was quite an interesting place.

We continued on 89A towards Prescott. The road took us up to over 7,000 feet through the Prescott National Forest. There was still quite a bit of snow at that elevation. I’ve discovered that I like snow when it’s in the 70s outside and I’m wearing shorts. It’s quite beautiful. It’s driving in it and the cold that goes with it that I don’t like. 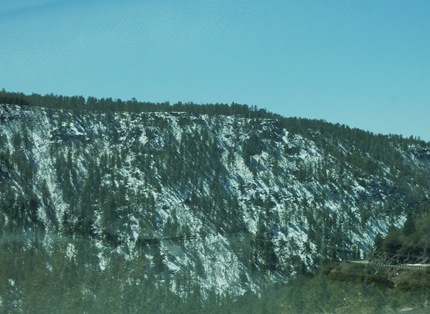 We continued through Prescott. It’s a pretty big town and looked like a nice place. We saw several RV parks with lots of RVs in them. We arrived back home at about 3:30 pm, just in time for our Friday afternoon cocktail.

We enjoyed our trip, and the scenery was very nice. In my opinion though, the red rocks of Utah are more impressive. The areas around Moab and the Monument Valley had more red rock and were just phenomenal. I doubt we’ll go back to Sedona. Just too touristy for our liking.

Posted by RV Khronicles of Kevelyn at 8:52 PM 4 comments: Links to this post