Madison, Wisconsin’s state capitol, is about a 30 minute drive from Columbus.  I had heard that the Mad City Water Ski Team puts on a free show on Sunday evenings on Lake Monona.

Since we weren’t renting out any canoes this weekend, I thought Sunday would be a good day to leave the park and explore Madison and see the ski show. 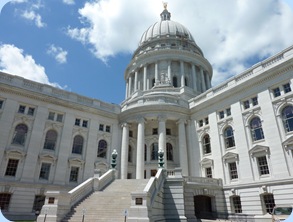 We started at the State Capitol.  Can you believe that I have lived in Wisconsin for 52 years and have never been to the capitol.  We went on the 2 pm tour.  Our tour guide was OK.  She knew her speech well, but didn’t know much beyond that.  She couldn’t answer any questions outside of her script.  In fact, she stated she was not much into history and wasn’t from Wisconsin.  Sometimes you wonder why people have the jobs they do. 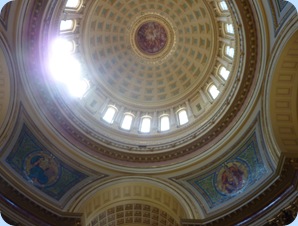 I did learn some interesting facts.  The dome is the 4th largest dome in the world by volume.  The 3 largest are all cathedrals.  The largest is in Africa, number 2 is St. Peter’s in Rome and number 3 is St. Paul’s in London.  We’ve now been to 3 of the top 4; I guess a trip to Africa is in order :)

The capitol was built between 1906 and 1917 for a total of $7.25 million.  Today’s value is estimated to be over $200 million.  It is built out of stone from many different countries.  The mosaics and murals are incredible.  I must say, it is quite a showpiece for Wisconsin. 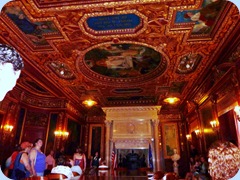 The Governor’s Conference Room was styled after the council chambers of the Doge’s palace in Venice.  It has 26 historical paintings about Wisconsin.  The governor gives his State of the State speeches standing in front of the fireplace. 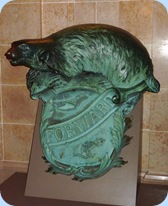 This giant bronze badger outside the governor's conference room, was mounted on the first USS Wisconsin battleship in 1901.  (The badger is the Wisconsin state animal.)  It is a tradition to rub it’s nose for good luck.  See how shiny it is. 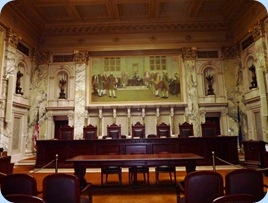 The Wisconsin Supreme Court consists of 4 women and 3 men.  We have the most female justices of any state.  Justice Annette Ziegler used to be a judge in Washington County, the county we lived in for 25 years. 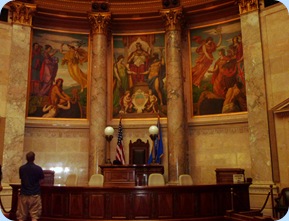 The State Senate has 33 members.  The mural symbolizes eastern and western countries coming together with the building of the Panama Canal. Each chamber is decorated with beautiful marble and wood.  Each chamber also has colorful skylights to allow as much natural light as possible.  These skylights were incredible! 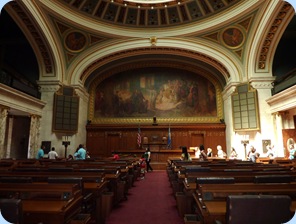 The Assembly Chamber is composed of 99 members.  It has murals symbolizing Wisconsin’s past, present and future.  The Wisconsin Assembly had the world’s first electronic voting system installed in 1917.

After our tour, we walked to Monona Terrace.  This is an area along the lake with a convention center and rooftop cafe; very beautifully done. We had 2 hours to wait until the ski show started so we sat down and had a beverage.

Then, we walked down to the lakefront.  There is a 13 mile bike path that goes around the lake.  These people are some serious bikers.  I would be intimidated to ride on this trail.  Riders were zooming along and constantly passing.  Most had road bikes with very narrow tires.  Kevin and I just have your average inexpensive bikes.  I think I’ll pass on this trail.

We overheard some people saying that the ski show was cancelled.  Apparently, the lake’s water level was too high, and there was a no-wake rule in effect.  This was surprising as it is such a large lake.  I told you we had a lot of rain :)

So, we called it a day and went back home.  Culver’s flavor of the day was Just Drummy.  That required a stop for a cone.

We may go back to Madison for the ski show.  They perform every Sunday through Labor Day.  We’ll see.

Posted by RV Khronicles of Kevelyn at 1:04 PM 2 comments: Links to this post