We went to three ball games last week, so since Friday we’ve been hanging around the RV park and relaxing. We are staying at Leaf Verde RV Resort in Buckeye, Arizona. This is the same place we stayed last year when we came to Spring Training.

We really like this park. The monthly rate is only $350 with 9 cents per KWH for electric. Most of the sites are pull-through and somewhat close together. But, there are sites around the perimeter of the park that are back in and a little bigger and more private. Here’s our site. There is a hedge of oleander bushes behind us which gives us nice greenery to enjoy out of our back window. The area behind the bushes is undeveloped so there is nothing behind us. 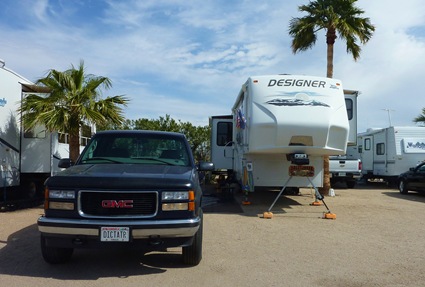 The park has a pool, shuffleboard courts, a basketball area, pickle ball court, horseshoe pits, a rec hall, dog walk area, and an outdoor fire pit area with grills and picnic tables. They have a few activities, but not as many as other places we’ve stayed at. That’s fine with us. We don’t really participate in many of the planned activities. It’s a very clean and quiet park. 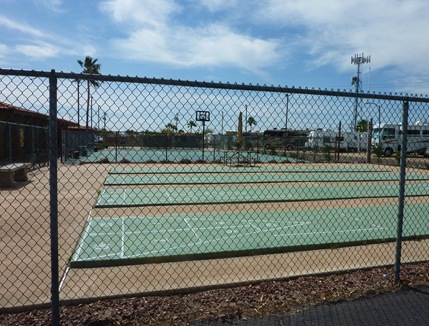 The pool is quite nice and a good size. There is not a hot tub, but the pool is rather warm. It was a little cool this morning, so the cover was still on it. This afternoon it warmed up to about 80 degrees. This whole week is supposed to be around 80. 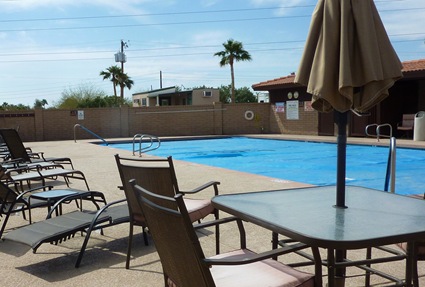 We rode our bikes to the store the other day and have been walking about an hour each morning. I’ve been doing some sewing and Kevin spent the day today watching basketball and Nascar. Two of his favorite Wisconsin college teams are in the March Madness tournament so he’ll be watching those games this week. We also plan to go to a few more games at some of the away stadiums in the Phoenix area.

Last Thursday we met some friends from Wisconsin at a Brewer game. Frank and Betty (on the left) are renting a condo in Sun City West for two months this winter. They are members of the camping club we belong to in Wisconsin. Don’t you just love Frank’s hat! 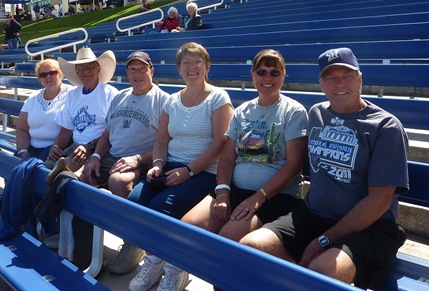 Joan and Al (in the middle) are one of the couples we met up with in Tucson and cruised with. They drove up from Tucson for the game. We all had a great time even though the Brewers lost again. They’ve been winning other games we haven’t gone to, so hopefully they’ll start winning when we go!

Posted by RV Khronicles of Kevelyn at 8:57 PM 3 comments: Links to this post