In July of 1996 our family took a trip out west.  One of our stops was Bryce Canyon National Park.  I remember we went on a guided horseback riding trip into the canyons.  We had a great time, and the scenery was beautiful.  Here are the boys back then. 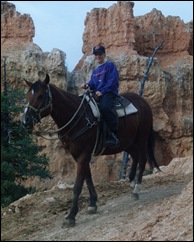 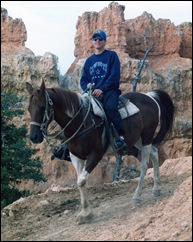 Since we have the annual park pass, we decided to go back for another look on Friday.  Our weather luck finally ran out.  It rained Thursday night but the forecast said it would end by late morning.  We got there at 11:30 a.m. and it rained pretty much all day.  Even so, it was more breathtaking than I remembered it.  I actually think the clouds made the colors in my pictures more vivid.  Sun sometimes seems to wash them out. 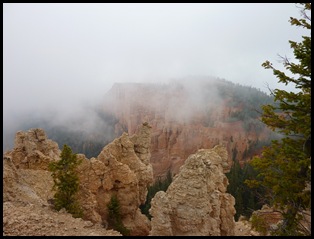 We drove to the end of the road which is the highest elevation at 9,000 feet.  I took this picture at Rainbow Point. 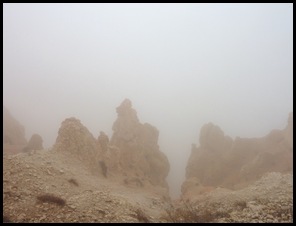 A minute later this was all you could see.  The fog or maybe it was clouds were rolling in. We hopped into the truck and headed back down.  At one point, it was actually sleeting.  At about 8,000 feet, we were below the fog and could see again .

The rock formations are called Hoodoos.  Here are just a few of the amazing views!  Do you see the castles? 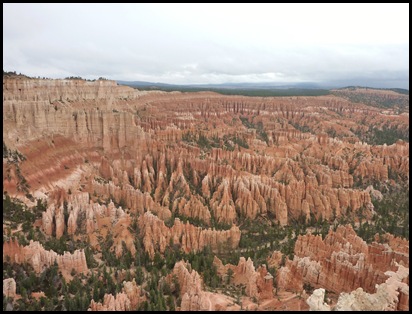 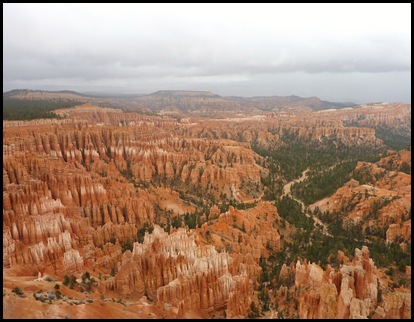 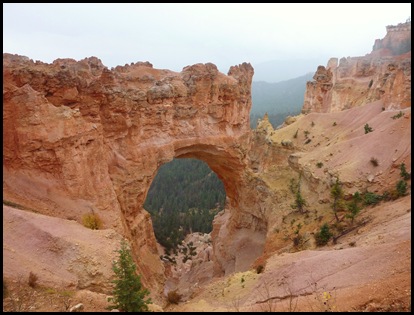 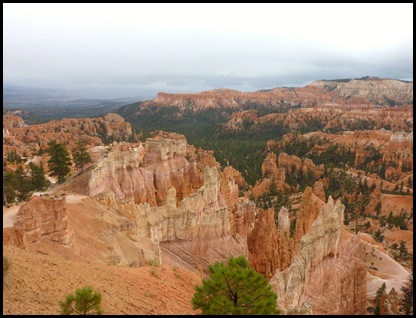 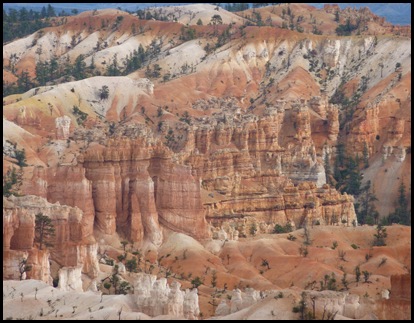 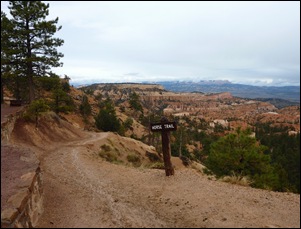 They still offer the horseback trips.  Here’s the trailhead. 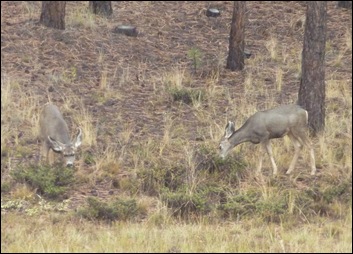 These mule deer were not too far off the road. 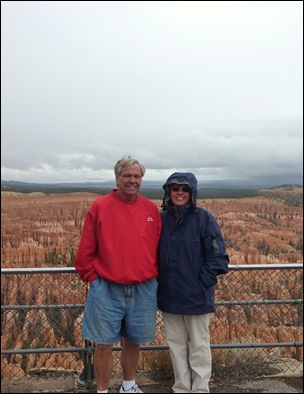 We found a young man kind enough to take our picture.  As you can see by my attire it was raining and in the 50s.  Kevin will probably be wearing shorts until the snow flies.  Hopefully, we won’t be around when that happens.

The sun’s back out today.  We’re headed to Capitol Reef National Park.  The sunrise above the mountains this morning was awesome. 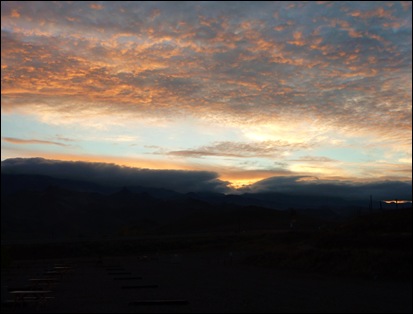 I’d like to thank Judy for giving me the correct name of the blue bird in my last post.  It was a Western Scrub Jay.  I know very little about birds, and only have a very small reference book.  I have been intrigued with some of the different types of birds we’ve seen since leaving Wisconsin.   Judy, please correct me anytime :)

Merikay noticed the bikes on the back of our camper and asked if we ride them.  We do enjoy riding, but have not had the opportunity since we left.  We’ve been rather busy sightseeing, and there are so many mountains everywhere!  We definitely plan to ride when we get to some level ground.  I am not good at riding uphill.  I end up walking it, so we’ve been hiking instead.  There are a lot of people out here who do ride bikes.  You wouldn’t believe some of the places we’ve seen them.  I know they’re all serious bikers because they’re wearing the “outfits”.  We don’t have bike riding clothes :)

Posted by RV Khronicles of Kevelyn at 6:09 PM 3 comments: Links to this post