Yesterday we decided to tour Arkansas’ State Capitol and the downtown area. Rain was in the forecast, so we purchased an all day pass on the electric trolley car for $2 each so we wouldn’t have to walk in the rain. It never did rain, but the trolley ride was fun and the drivers do some narration which was a bonus. 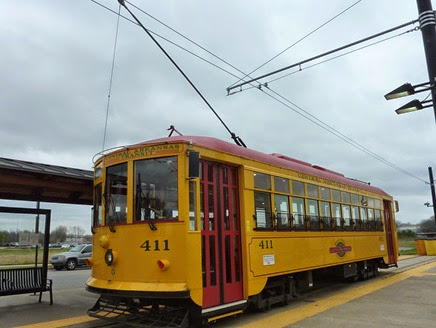 The closest trolley stop to the capitol is a mile away, so we had a nice walk through the downtown area. I had read online that there was not much public parking, but we saw plenty of metered street parking and twelve free visitor parking spaces across the street. The legislature is not currently in session, so I’m guessing when they are there, parking is more difficult to find. 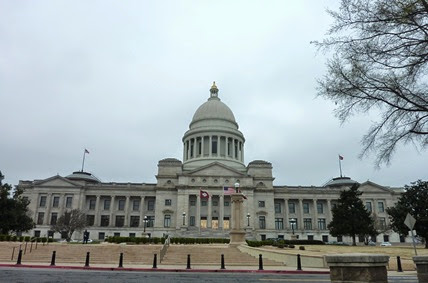 The building was constructed between 1899 and 1915. The original construction cost was not to exceed $1 million. After two architects, two general contractors, six Capitol Commissions and three governors, it was finally completed at a cost of $2.3 million. Yup, sounds like a typical government project.

They advertise tours daily on the hour, but when we got there the next tour wasn’t scheduled for two hours, so we did a self-guided tour using a nice brochure they have available.

The rotunda is not as fancy as others we’ve seen with no stained glass or murals, but there was an awesome chandelier. It is suspended by a 73-foot chain, weighs more than 4,000 pounds and is 12 feet in diameter and 18 feet in height. 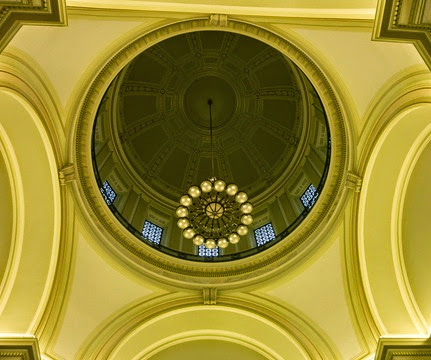 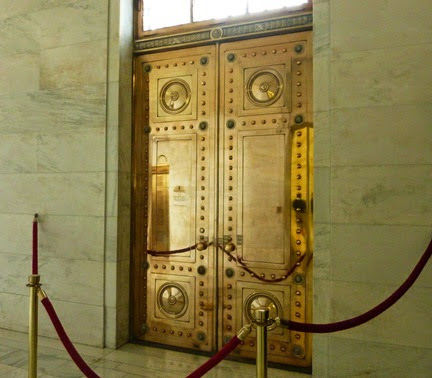 Arkansas’ Senate and Congress, as well as the governor and many other government officials work in this building. The General Assembly meets in session for only about the first two months of each year. Since they were now not in session, the building felt eerily empty. I’m not sure what they do the rest of the year.

Although this was an impressive building, it is not nearly as ornate as other state capitols we’ve visited. Also, the grounds are not very landscaped and there were not many statues. There was a statue honoring the Little Rock Nine we learned about earlier in the week. 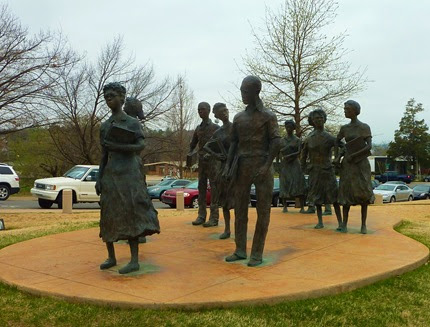 We walked to our next stop which was the State House, Arkansas’ first state capitol. Construction began in 1833 and was finally finished in 1842. 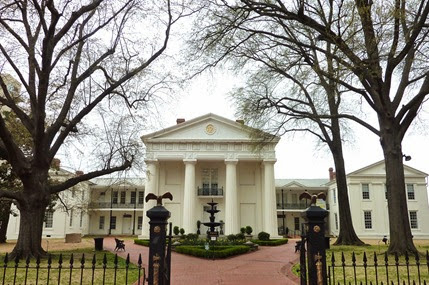 Corners were cut during construction to save money, and the building was constantly in need of repair. The cost of repairs and the need for additional space caused state officials to approve the construction of a new state capitol. Numerous tenants occupied the old state house over the coming years. Efforts by several women’s organizations to save the building resulted in it becoming a museum in 1947.

In 1996 the entire foundation had to be replaced. This had to be done in 6 foot sections to maintain the structural integrity of the building. It took three years to complete. Wow, that had to be a painstaking job.

One of the exhibits inside is called Lights! Camera! Arkansas! and shows the role of Arkansas in Hollywood movies highlighting movies filmed in the state as well as actors from Arkansas. They include Billy Bob Thornton, Johnny Cash, Glen Campbell, Mary Steenburgen and many others. It was quite an interesting exhibit.

Our final visit was to the Arkansas History Museum. There are lots of statues throughout downtown Little Rock and along the Riverfront. I particularly liked the aluminum sculpture in front of the history museum representing square dancing. 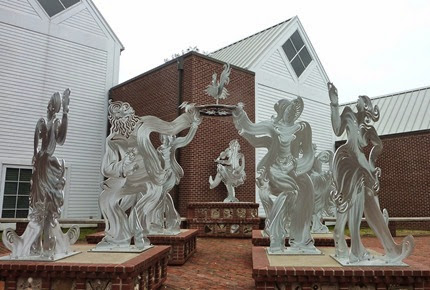 The museum had a temporary exhibit about the Bowie knife which Kevin found quite interesting. How the knife became known as the Bowie Knife is not exactly known, but Jim Bowie used a large knife to win a brawl and his brother was instrumental in convincing people it was the first Bowie knife. Those sure were some big knives. 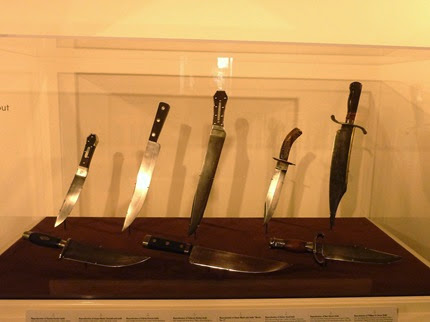 There are quite a few museums in Little Rock and most of them are free. I found the city to be a great place to visit.

Another place we visited was the Heifer International Headquarters building. I didn’t really know what this organization was all about. They had an area for visitors to explore and a nice young lady gave me an overview of the organization. It is a non-profit group working on hunger and poverty throughout the world, currently working in 37 countries. They provide animals for families and the education to raise them. The families are then asked to pass it on to help others in their community. It sounds like they are doing good work throughout the world, but does a non-profit really need such a fancy building? 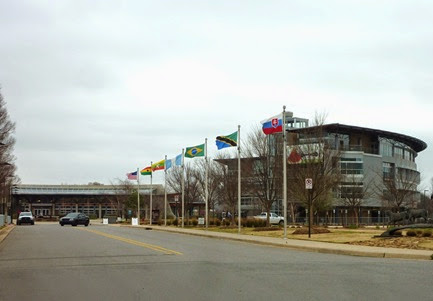 Posted by RV Khronicles of Kevelyn at 7:36 AM No comments: