I want to wish all the mothers out there a very Happy Mother's Day. We will be meeting up with my mother, brother and his wife, and our son Eric for dinner. It's always nice to be able to spend time with family.

We've been back in Wisconsin for about three weeks. We arrived with snow on the ground, and the weather hasn't improved too much since. It has been very rainy and darn cold. We have had a few nice days in between, but lots of lousy days, too. Especially on the weekends. Even so, these hearty Wisconsin campers come anyways. The campground has been about half full each weekend, even with some really lousy weather.

Despite the cold and rain, the spring tulips are blooming. The lilacs are way behind schedule. These beautiful flowers are along my walking route. 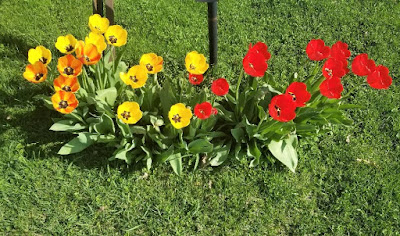 We have managed to golf twice since we've been back. Monday afternoons we are both off, and the last two Mondays have been decent enough to play. A bit windy the first week, and quite wet the second week, but we still managed to have a good time. Tomorrow looks like we'll be able to go again, probably still pretty wet.

It was so cold and rainy on Friday (high of 42 degrees), that the lake was actually warmer than the air causing steam to come off of the lake. Brrr! 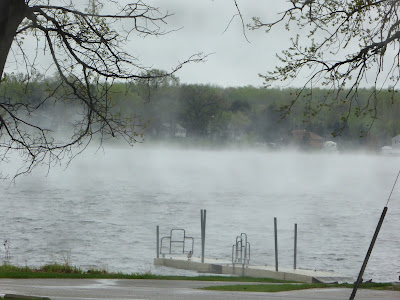 The bird feeders have been busy. I love seeing the Baltimore Orioles as they migrate through in the spring. 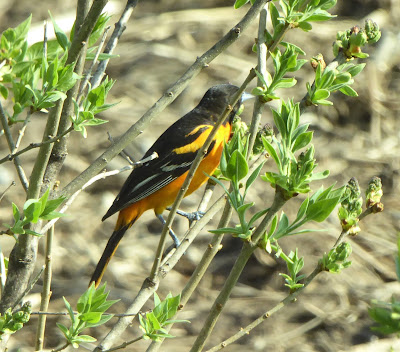 I put oriole food in the hummingbird feeder, but it must not have been big enough for them to sit on. This guy found a way to get at it though. 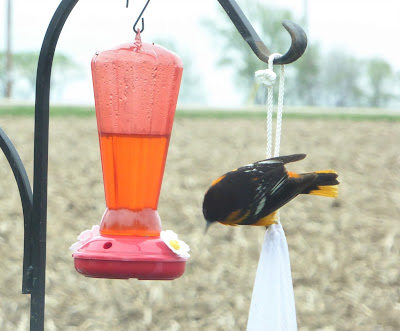 A female cardinal and rose breasted grosbeak were munching away together. 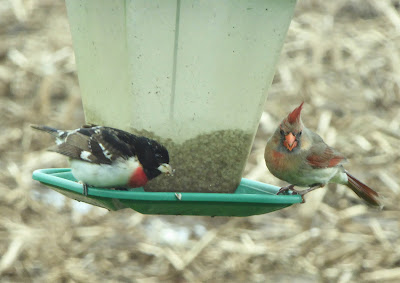 On May 1st we celebrated 8 years of full time RVing. We've thoroughly enjoyed those years, and look forward to many years of future traveling. The places we've been to and things we've seen have been amazing.

However, since we bought the park model in Arizona and plan to spend every winter there, I'm thinking we won't actually be full time RVers anymore. That's okay though. I really like the place we bought and the friends we've made in Yuma.

We have some exciting dreams and plans for the upcoming years. There will be some changes in our routine. I'm waiting to make any announcement until later in the summer, but stay tuned. Changes are ahead!

Don’t wish upon a star – Reach for one!
Posted by RV Khronicles of Kevelyn at 12:04 PM 2 comments: Links to this post