It's hard to believe it's been two weeks since I posted a blog. The time has flown by, but we haven't been doing anything too earth shattering.

We left Gulf Shores on December 31st and drove about six hours to Casey Jones' Campground in Lake City, Florida for one night. It's a nice little campground close to the interstate with full hook-up pull through sites. Perfect for one night. As it was New Year's Eve, there was plenty of activity. The people behind us were from Minnesota and invited us over for a little party. We went over for a bit, and met several people who spend the entire winter at the park. This would still be too far north for our liking. We're looking for warmer weather.

On Sunday, January 1st, we continued south to Road Runner Travel Resort in Fort Pierce. We're here for a month to explore the area and visit with our friends Harland and Kim who are at a motorcoach resort in Port St. Lucie, about 20 minutes south of us.  Our park is decent. It is older, but seems to be maintained pretty well. There is a small pond in the center of the park with sites all around. Those are definitely the nicest sites. Our site is across the street from the lake and is fine. 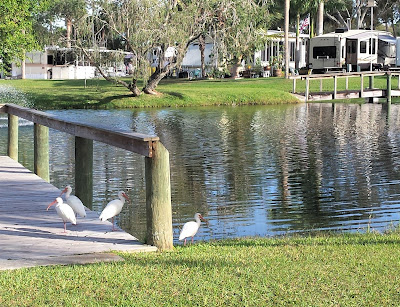 I would estimate about forty to fifty percent of the winter visitors at this park are French Canadian. When doing our daily exercise walking, we mostly hear French being spoken wherever a group of people are congregated. We don't find this park to be very friendly.

Fort Pierce is on the Atlantic side of Florida, about halfway between Orlando and Miami. The town itself seems to be fairly low income with lots of houses and businesses with bars on the windows. Luckily, the RV park is actually north of the town in a safe area. The outlaying parts of Fort Pierce seem okay, and there are some condos along the ocean that are nice.

We took a drive last week on Hwy. A1A on the outer banks island between Fort Pierce and Vero Beach. We drove about thirty miles, but didn't see much. The island looks so small on the map, but from the road, you can see buildings or trees, no ocean. We did stop at a couple of nice parks with beaches, so were able to do some walking along the beach. 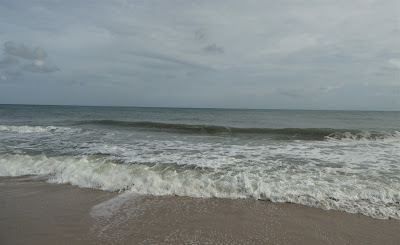 Harland and Kim invited us to their resort last week for dinner. They purchased a lot a few years ago at St. Lucie West Motorcoach Resort. They had had a tiki hut with outdoor kitchen and seating area built and lots of beautiful landscaping done to their site. They back up onto a pond with a waterfall making for a beautiful view. I was having such a good time, I forgot to take any pictures.

On Tuesday, Harland and Kim came to our park and we had a little happy hour. Then we went to Cowboys in Fort Pierce for their Tuesday special of 50 cent wings and 50 cent draft beers. The food was very good and the company was even better. Again, I forgot to take pictures.

I've been doing some sewing. Korey and Cathryn commissioned me to make a quilt for a baby friends of theirs had. I shipped it off on Monday. Hope they like it. 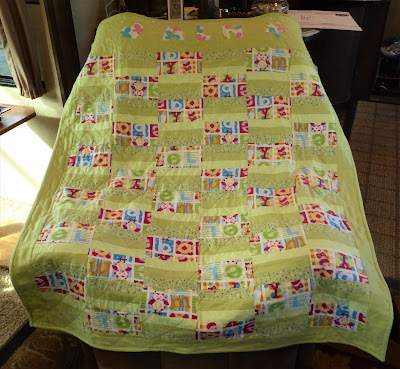 Last evening Kevin was outside and called me to come out and see the moon rise. It was sure pretty between the palm trees. 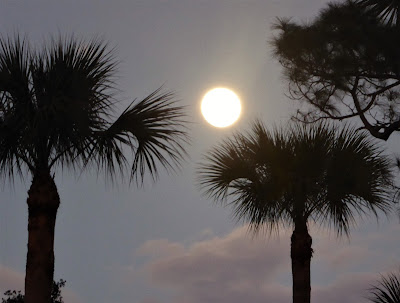 We have plans to drive to the Florida Keys next week and do some exploring. We're not taking the RV, but rather staying overnight at a hotel and then exploring Everglades National Park the second day.

The weather has been pretty warm, with a few cool days last weekend. It is more humid than I was expecting and we've had rain several times.

Don’t wish upon a star – Reach for one!
Posted by RV Khronicles of Kevelyn at 6:58 AM No comments: Links to this post