We met up with the hiking group again this morning for a five mile hike that was advertised as being moderate except for a short stretch at the end where we would have to scramble over rocks to get to the top of a summit.

If these seniors that are ten to fifteen years older than us can do it, so can we. NOT!! I wasn’t even sure if Kevin was going to go as he’s been battling a cold since last Wednesday. But, he said okay so off we went.

The first few miles were through washes scrambling over rocks and walking in deep gravel. There were really no trails anywhere on this hike. Just picking our way through the rocks. Then we got to the end where we were going to climb up a steep cliff to Power Line Pass. There was no trail, just carefully trying to find your way up the rocks.

We made it a little more than half way up. A few people didn’t try at all, and I don’t blame them. It was quite steep. The higher we got, the more concerned I was about how was I going to get back down. I finally decided it just was not worth the danger involved.

Just as we stopped and were resting before we turned around, a man slipped on a loose rock a short ways above us and fell about ten feet before grabbing a big boulder. He was quite banged up on his arms and legs, but luckily nothing worse. That clinched it; we were going back.

Here’s where we came from. Some people were already heading back. It went around to the left and was quite a bit further down. 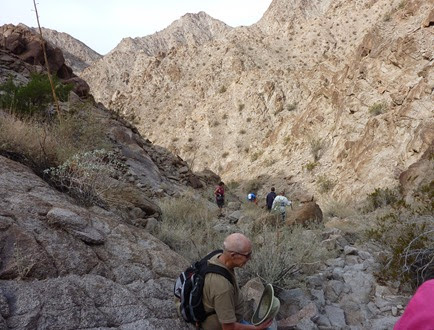 Here’s where we were trying to go. It just kept getting steeper. 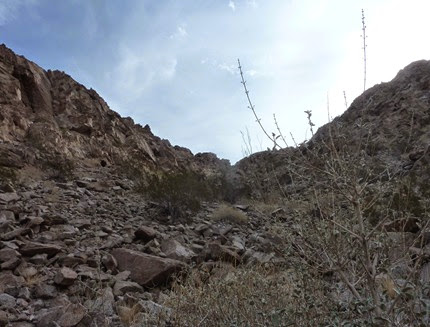 As I look at the pictures, it doesn’t look that bad. Trust me, it was no fun! We made it back down and waited for the those who kept going. We had 25 people on this hike and 12 of them went to the top. I think some of them were part mountain goat :)  I would not call this hiking as much as mountain or rock climbing.

Here we are happy that we made it back down enjoying our trail mix. 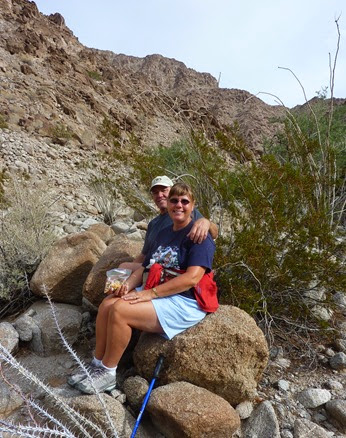 From this point we still had a few miles climbing over rocks in the wash to get back to the truck.

We saw this cool natural arch up at the top of one of the cliffs. It’s so nice to have a camera that can zoom in as it was quite a ways up. 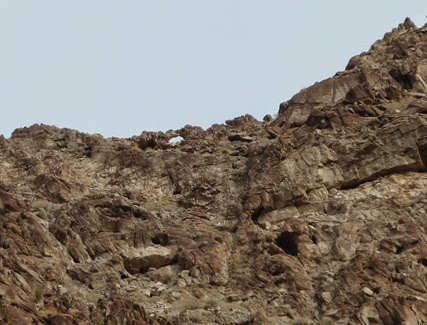 It ended up that the hike was longer than five miles. Our leaders hand held GPS said it was just over six miles, but two other people with cell phones said their apps said it was closer to eight miles. So, we hiked between six and eight miles, and it took six hours. I felt bad for Kevin. He was not feeling 100%, and he was dragging.

Luckily, tomorrow we will be sitting in the truck for about fourteen hours as we begin our trek north for family events. Our sore muscles will have a chance to rest.

On Wednesday evening we will arrive in Lincoln, Nebraska. We’re staying with Korey and Cathryn for three nights so we can attend Cathryn’s graduation events. She is graduating from Creighton University in Omaha with a Doctorate in Occupational Therapy. We’re so proud of her.

On Saturday we will leave Nebraska and drive on to Wisconsin for Christmas with the family. Korey and Cathryn will join us on the 23rd for a few days. Lots of wonderful family time coming up!

Posted by RV Khronicles of Kevelyn at 6:58 PM No comments: Links to this post