On Monday we went to a Milwaukee Brewers baseball game with our son Eric. It was a good game, the Brewers won. They are in the Wild Card race, just a few games out. It should be an exciting end to the season. Hopefully, they’ll be able to earn a spot in the playoffs. 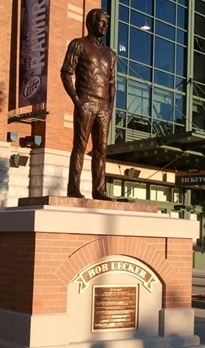 The Brewers recently honored announcer Bob Uecker with a bronze statue at Miller Park. Uecker has been the radio announcer for the Brewers since 1971. As long as I have been going to games, he’s been the announcer. He was dubbed Mr. Baseball by Johnny Carson and starred in the show Mr. Belvedere in the 1980s. He is a treasure in Milwaukee and still going strong at age 77. This was the first game we’ve been to since the statue was dedicated. He is only the 4th person to have a statue outside of Miller Park. The others are Hank Aaron, Robin Yount and Bud Selig.

There is a separate area with a bronze statue depicting three iron workers. It is a memorial to the three workers who were killed during the construction of Miller Park when a giant crane collapsed. If you’ve never been to Miller Park, I would highly recommend it. It’s a fantastic stadium. 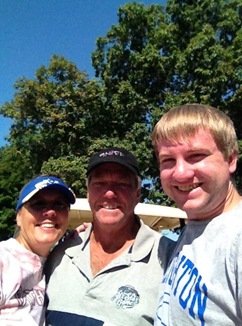 On Thursday our son Korey arrived from Minnesota for a visit. Friday Kevin and I went golfing with him. It was a beautiful day. Korey doesn’t get a chance to play much, but he had a great game. Kevin was trying out his new driver. It’s going to take him a few rounds to get it all worked out. On Saturday Korey attended a bachelor party for one of his high school friends. He had a good time hanging out with a bunch of guys he went to school with.

Kevin and I went to a wedding on Saturday night. Jessie, the daughter of our friends Jim and Wendy, got married. It was an outdoor wedding at Hubbard Park in Milwaukee. A very pretty setting overlooking the river. She was blessed with a beautiful fall day for an outdoor wedding. 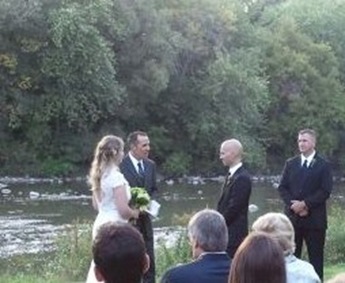 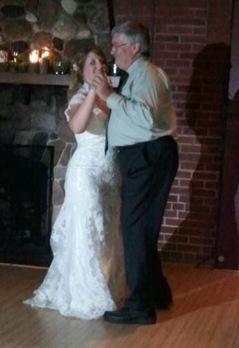 We’ve known Jessie since she was about six years old. Her family belongs to the same camping club we are in. Our families went on several vacations when the kids were all younger. I have lots of great memories of watching the kids hanging out together and exploring at the National Parks and other historic places we visited. It was so nice seeing her so happy. Jim and Wendy have three daughters. Jessie is the youngest and last one to get married. I’m sure Jim was feeling some strong emotions during this dance.

Today we celebrated my mom’s 75th birthday. Her actual birthday is on October 14th, but we’ll already be on the road. So, today we had brunch at the Copper Dock restaurant on Friess Lake in Richfield, Wisconsin. The food was very good.

Our family, as well as my brother and his wife, and my mom’s friend Richard were all together. My mom is doing very well for her age. She’s healthy and going strong. She tells us she plans to live long enough to take care of us when we get old. That’s a good attitude to keep her young :) 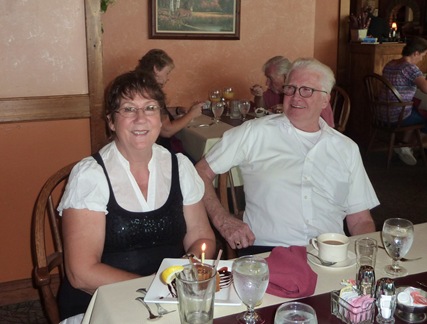 Tomorrow Korey and I are going to Kohl's to see if we can do some damage with the 30% off coupon I have. He’s leaving on Tuesday morning to head back home. Our camping club is coming next weekend to camp at our park.

On Saturday Kevin repaired our water pump with the repair kit they sent us. So far, so good. I sure hope this is the end of these constant water pump problems!

On Sept. 24th we have an appointment to take the 5th wheel to Custom RV near Madison to have the awning fixed.

We leave three weeks from tomorrow. We have a lot going on between now and then, so I’m sure the time will fly by quickly.