Moving on From Naples

Today is our last day in Naples, Florida. We've spent two months in Florida with one month left to explore this beautiful state this winter.

The weather in Florida has been very nice with temperatures often above average. In fact, today Naples is expected to tie a record at 88 degrees. We're enjoying our time in Florida, but are finding it somewhat more humid than we like. It seems snowbirds are often very pro Florida or Arizona in their tastes, and I think we definitely fall into the Arizona camp. That being said, we just may return to Florida at some point. Never say never! We picked a good year to try Florida as Arizona has had a cooler and wetter winter than normal.

We've really enjoyed our time in Naples. It seems to be a pretty affluent area with beautiful landscaping, beaches, and homes. The city does a great job keeping everything clean and maintained. It is probably one of the most bike friendly communities we've ever visited. There are trails, sidewalks and bike lanes pretty much anywhere you want to go. We've done a great deal of biking including riding to the beach several times. Parking at the beach is hard to find and is not free. It's forty minutes each way to bike from our campground through a great greenway.

Once at the beach, Kevin finds shade and reads a book. I love walking on the beach and usually spend about an hour exploring. Works great for both of us as he doesn't like walking in the sand or being in the sun for too long. When it's humid, there is sometimes sea fog out over the Gulf. You can see the bank of fog out in the distance in the picture below. 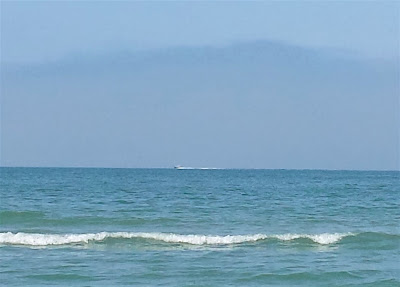 One day I saw this crab. I think it was dead, but it was kind of cool to see. 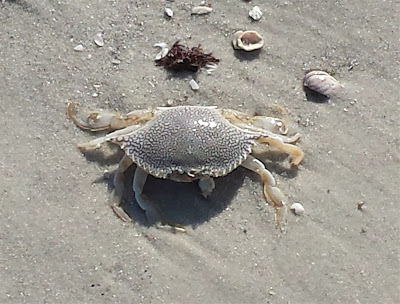 I saw something new to me at the beach. At many of the public beaches there are racks with child sized life jackets. They are put there by the Coast Guard Auxiliary for families to use free of charge to keep their children safe. Just return when you are done with it. What a great idea. I wonder if other communities have similar programs. One of the things people warned us about in spending the winter in Florida was bugs. We have been pleasantly surprised to find that there are few bugs where we have been. In Fort Pierce, we did experience mosquitoes in the evening at times. In Naples we have not had any issues with bugs of any type. Maybe its because they have a mosquito control district. I'm not sure what they do, but I'm guessing they spray. I'm sure Zika virus has something to do with it. 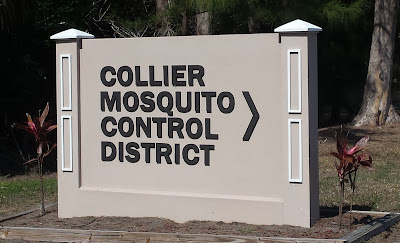 We saw this turtle partially buried in the ground near a pond on the grounds of the mosquito control district. I'd guess it was probably a foot long. 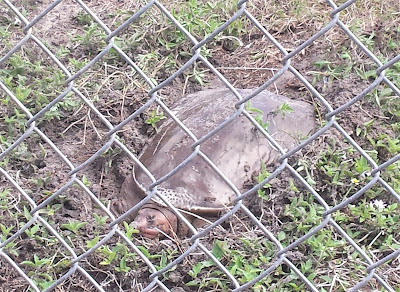 So, we've really enjoyed our time in Naples exploring new areas, spending time at the beach, hanging out with several good friends and soaking up the great weather.  We did find Naples to be somewhat more expensive than other areas we've been to. I guess all of this beauty and affluence comes with a price.

Tomorrow we head north to Dunedin for five nights to do some further exploring and visit more friends. Then it's weekly stays in a few more parts of Florida before heading north at the end of the month.

Internet access is something every full time RVer struggles with. Many RV parks advertise free wi-fi, but it is often too bogged down to use. When Verizon announced an unlimited plan a few weeks ago, there was much excitement in the RVing community. We bit the bullet yesterday and signed up.

We lost a 15 percent discount we were getting as Dodge County employees as the new plan doesn't offer the discount, so it will cost us $15 a month more. Also, we have four devices on our family plan using data. The "unlimited" plan allows 22GB per month at 4G speed and then they have the option of slowing you down. Our former plan was 24GB, and we often used the full amount. We'll see how this throttling back on speed goes. If it becomes a problem and makes it too frustrating to use, we may end up switching back to a regular plan. Time will tell.

Don’t wish upon a star – Reach for one!
Posted by RV Khronicles of Kevelyn at 7:33 AM 3 comments: Links to this post