Last year I discovered the Quilt Expo in Madison. I purchased three projects last year, and I wasn’t going to attend this year’s expo because I’ve only finished one of those projects :(

However, I got an email from them saying they needed volunteers. In exchange for 3 hours of volunteering, I got free admission to the show and parking. Well, I just had to go. So, yesterday was the day. My volunteer shift was at one of the Presentation Stages. I helped the presenters with handouts and just watched to make sure everything went smoothly. Easy enough!

One of the presenters was a lady who started an organization that collects sewing machines and sends them to places in need like Africa, Haiti and New Orleans after Hurricane Katrina. Another presenter was a book-signing by author Jennifer Chiaverini who writes novels with quilting as the main theme. Close to 100 people stood in line to get their books signed. Interesting stuff.

There were hundreds of quilts on display in the judging area. This one won the top price. It’s hard to see from the picture, but the detail was amazing. I just marvel at the skill this person has! 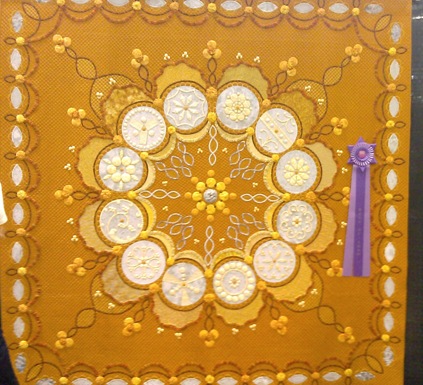 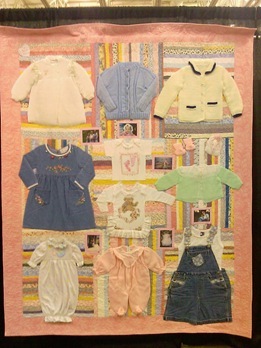 There were ballots to vote for your favorite quilt that had not already received a ribbon. I chose this one. What a clever idea this lady had. She used baby clothes her daughter had worn. They were applied in such a way that they can be removed if her daughter ever wants to use them for her own baby. Cool!

I didn’t spend quite as much money as last year, but I wound up buying patterns for 6 more projects. I need to step it up on the quilting front. I’m very excited about some of these projects. I can’t say more because most of them are for gifts. But, here’s a picture of the patterns I bought. 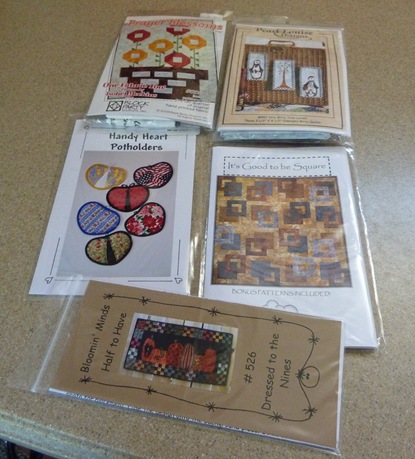 There is a shop in Beaver Dam called Nancy’s Notions. Nancy has a sewing television show, and they have a big display at the expo. The shop was having a big sale this weekend, and I got a coupon for something free. So, today I went and checked that out. I found the cutest camper fabric to make a tote out of using one of the patterns I bought yesterday. 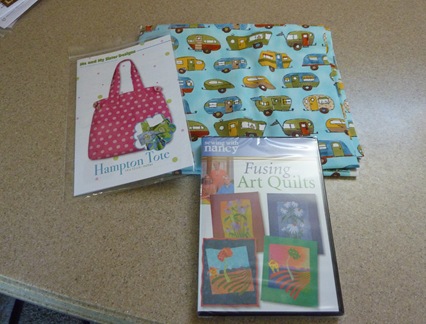 I wasn’t expecting much for the free item, maybe some needles or thread. I was pleasantly surprised to find out it was a DVD showing how to create fusible art projects. It will be perfect for one of the projects I bought last year and didn’t really know how to complete.

I was so excited and full of ideas that I woke up at 1:00 am last night and couldn’t get back to sleep for 2 hours. I should have just gotten up and started sewing :)

On Thursday I was at Eric’s house painting the bathrooms. One more day and they will be done!  Around 1:00 in the afternoon my phone rang. It was one of those calls every mother dreads getting. Eric’s first words were “Don’t freak out Mom, but I’m driving myself to the ER.”  It seems he got his finger caught in a blower motor and had 3 long cuts on his ring finger.

Eric is an HVAC Technician and gets minor cuts and burns regularly. So, I knew it had to be pretty bad for him to go to the ER. He said it was really bleeding a lot, and that’s what made him decide to go. He ended up getting 18 stitches. About 3 hours later he was home with a large bandage on his finger. He was also happy to show me a picture he took with his cell phone of the injury. It looked like raw meat. Don’t worry, I’m not going to share the picture with you!

He’s doing fine. He had to take the day off on Friday, so enjoyed some extra video game time. I told him that was quite a drastic way to get a day off of work. On Monday, he’ll be back at work. Hopefully, with a little more caution around blower motors.

Our weather has been fantastic this past week. About half of the sites in the campground are occupied for the weekend. A beautiful weekend for those lucky campers.