I found a Groupon for a walking tour with a company called Ashley on the Cooper Walking Tours, a clever name as Charleston is located between the Ashley and Cooper Rivers. On Monday we took their two hour 1 pm tour with Kathy.  She was a fantastic guide, teaching us the history of Charleston in a fun and educational way.

We started near the Circular Church which has been on the site since the late 1600s, but has been rebuilt several times due to fires. There are many old grave markers and vaults dating back to the earliest days of the church. 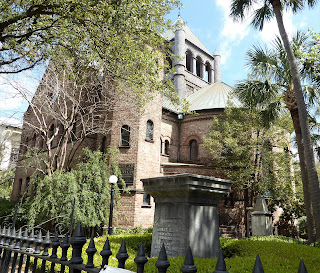 Charleston has many historic churches. The Cathedral of St. John the Baptist was built in 1890 using sandstone from the northeast similar to brownstone homes. It is beautiful from afar, but even more impressive up close. Each block has hand chiseled stars representing the Bible story where God promises Abraham as many children as there are stars in the sky. The stained glass came from Germany. 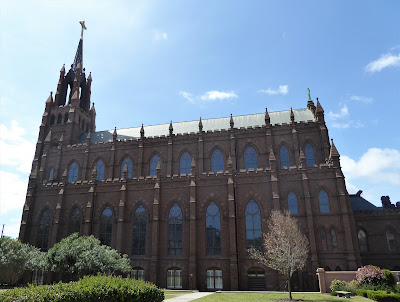 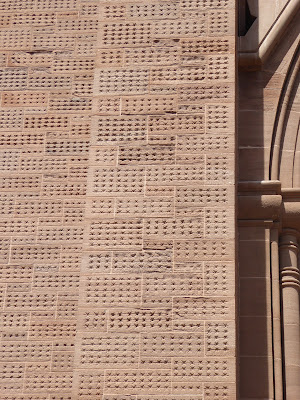 St. Michael's Anglican Church was built around 1752 and is the oldest church in the city. In historic times, families purchased their pew boxes. George Washington and Robert E. Lee both worshiped here (not at the same time, of course). The pulpit is the original. The gold chandelier was originally lit with candles. During the Civil War they painted it black to keep it from being stolen, and it worked. 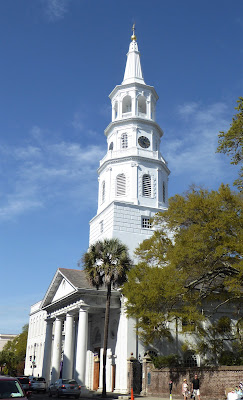 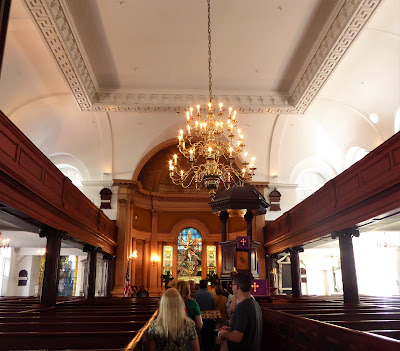 In addition to many beautiful churches, we also saw blocks and blocks of the most amazing historic homes. I think Charleston is the most beautifully historic restored city I've ever seen. Many other historic cities have some great historic homes mixed in with newer construction, or the homes are in disrepair. Charleston has done am amazing job of keeping the hold homes in excellent condition.

This is due in great part to a fantastic lady named Susan Pringle Frost who founded the preservation society in Charleston in the 1920s. She and her rich lady friends were instrumental in having many homes restored, maybe the original flippers. She was responsible for the famous Rainbow Row on Bay Street where the homes are painted in vibrant pastel colors. She was also the first president of the Equal Suffrage League.

This blue frame house is supposedly the oldest home in Charleston from 1691 having survived many fires, hurricanes, floods and anything else Mother Nature could throw at it. 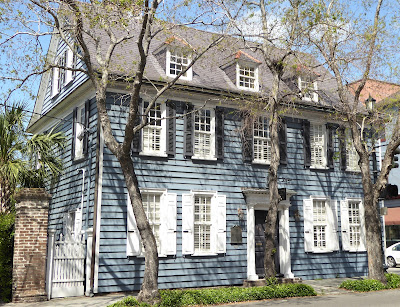 This bed and breakfast is the John Rutledge House who was a governor of South Carolina and a signer of the Constitution. 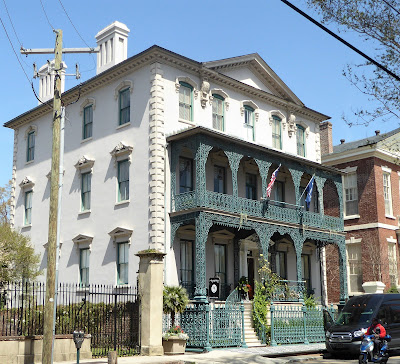 Many of the houses have beautiful flower boxes under the windows and amazing gardens behind their fenced yards. 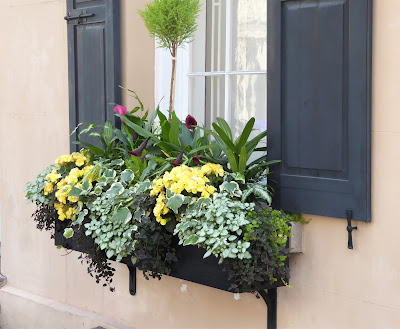 I loved this blooming tree with red and white blossoms. Our guide said it was a non fruit bearing peach tree. 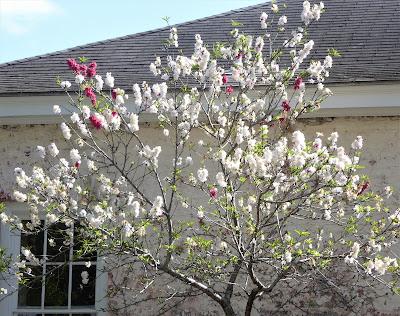 After our tour we walked down to Waterfront Park where there is an amazing pineapple fountain. Pineapples were used as a sign of hospitality and are seen all over the city on wrought iron fences and concrete walls. 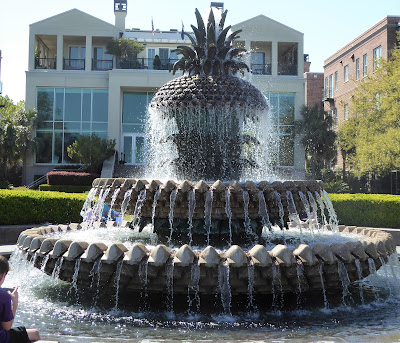 We continued to Battery Park where there is this statue to honor Confederate defenders of Charleston. There are many cannons on display all around the park. 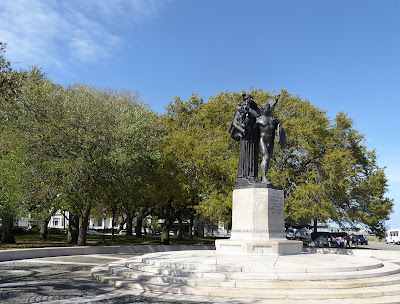 South Carolina was the first state to secede from the Federal Union on December 20, 1860. The vote was held on this site which is now a bank (on the left). There is a plaque on the wall. The adjoining buildings are much older, both occupied by law firms. Lawyers are second largest industry in Charleston. Tourism is number one. 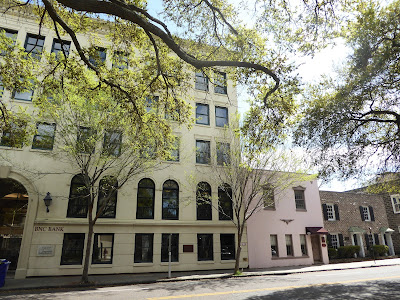 We've toured several cities on trolley tours which are fun and informative. If we can find a walking tour, we prefer it because there is more time for the guide to give you in-depth information. Charleston does not have trolley tours. Instead, they use horse drawn carriage tours which are much quieter and cause less traffic problems. The horses wear bags to catch their poop. If the horse pees on the street, the driver drops a marker and street cleaners with a water tank spray it down at night so the streets don't small like a stable. 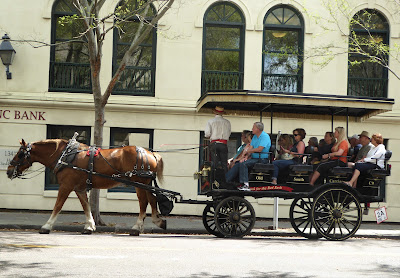 We stopped at the Fort Sumter Visitor Center on the mainland. The fort is actually on an island quite a ways out into the harbor. Ferry rides are available, but at $21 per person, we just weren't that interested. We've been to quite a few old forts in our travels. Fort Sumter is famous for the place where the first shot of the Civil War was fired  on April 12, 1961 by Confederates onto the fort which was occupied by the North. The fort fell quickly to the south giving the Confederates a strategic port. It stayed in southern control until 1865 despite repeated attempts by the north to take siege. It was severely damaged by over 20 months of bombardment.

George Washington visited Charleston in 1791 for a few weeks. He was treated as a hero with many balls given in his honor. Washington Park has a statue of him and a 1/30 scale reproduction of the Washington Monument. 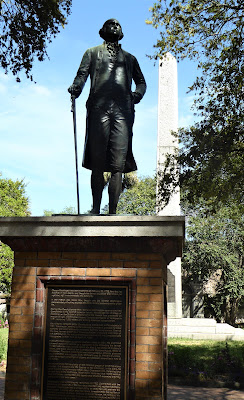 One story is that he so much admired the Charleston County Courthouse, that he asked the architect James Hoban to design the White House. 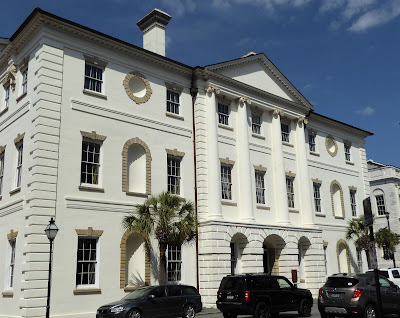 I took many more pictures, but I'll stop here. I thoroughly enjoyed my day in Charleston, and would highly recommend it as a place for everyone to visit. We just scratched the surface of what there is to do.

Don’t wish upon a star – Reach for one!
Posted by RV Khronicles of Kevelyn at 11:39 AM 2 comments: Links to this post