This is the third year in a row I’ve attended this event at the Alliant Energy Center in Madison, Wisconsin. It’s hosted by Wisconsin Public Television and Nancy’s Notions. Nancy has been hosting a sewing/quilting show on public television for thirty years.

Once again, I volunteered to work at the show. This gave me free admission and parking. My volunteer shift was from 2:30 to 6:00 pm. I got there right at 9:00 am and quickly worked my way up and down the rows of vendors. I was done by 10:30. Next, I went back to a few of them that caught my eye and made some purchases. My goal was not to buy anything this year as I have several kits and patterns that I bought at previous shows and haven’t finished. 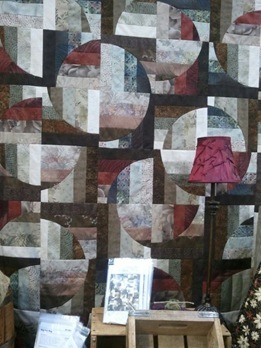 For the most part, I did pretty good. I bought a few items to use for patterns or projects I already have. I did end up buying one pattern from a vendor in California called A Quilter’s Dream. I bought one of her patterns last year and really like it. She had a new design this year that really caught my eye. I just couldn’t resist. I’m currently working on the pattern I bought from her last year. I’ve almost finished piecing the top. It’s for a gift for my son Eric. He never reads the blog so I’m not giving away any secrets :) I’ll post a picture when it’s done.

At 11:30 I attended a lecture I had signed up for in advance. It was about machine applique. The cost was $10. I don’t think it was worth it. I got a free pattern which I saw later was being sold on clearance at Nancy’s Notions for $1.49. The hour long lecture was mostly pointing out products to buy for applique quilting and showing some examples of quilts the presenter had made. I have a few projects I want to make that involve applique, and I thought this lecture would help me get started. I didn’t really learn anything I didn’t already know. So, the next project I will start will be applique. I’m just going to jump in and do it!

My volunteer assignment was as docent in the quilt display area. There were over 320 quilts on display for judging. I am just blown away by the talent of some of the quilters. Here’s an example of the artwork on display.

This one won the Best in Show award. 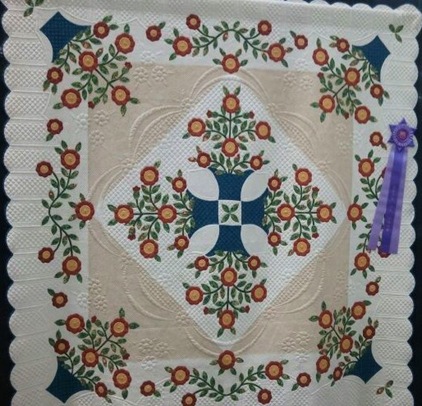 The picture just doesn’t do this next one justice. This lady from Germany had two quilts in the show. Each had over 40,000 crystals on it. Her quilting was very tiny and just amazing. Her backing fabric was dark and she used various color bobbin threads for the back to make the design pop. I was just blown away by her work. 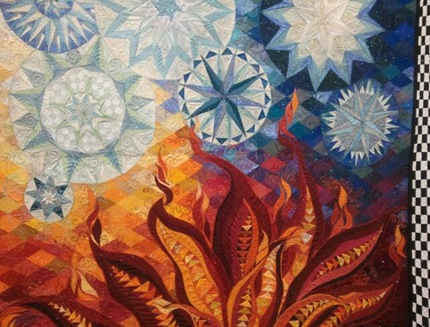 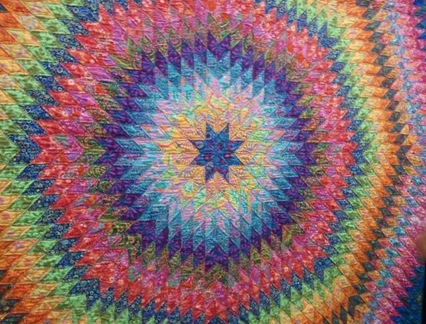 This Christmas one was beautiful. It also had some crystals to make it sparkle. I saw a lot more crystals this year on the quilts. I don’t know how the judges could choose winners. There were so many fantastic entries. 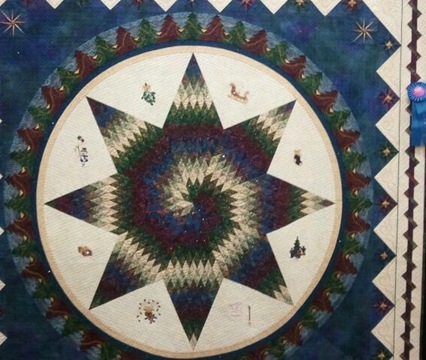 There were a few areas of quilts on display that were not being judged. One group was of quilts made using the selvedge on the ends of fabric. So many creative ways to use these scraps. This is the same quilt. The close-up shows how the selvedge was used.

One quilter had about 20 or 30 quilts on display. Her work was incredible. All done on a regular sized sewing machine. Unbelievable. She’s the lady in the white top. 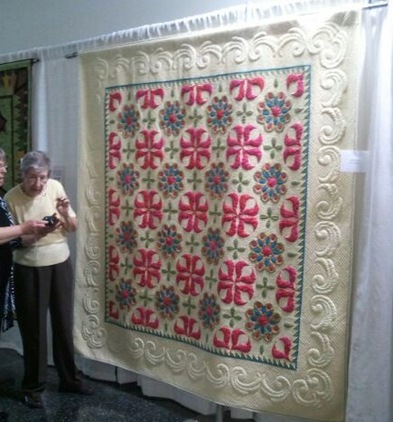 Here are a few quilt patterns/kits I wanted to buy, but I restrained myself.

I really like the leaves and colors on this one. 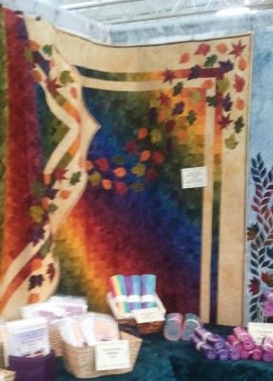 This table topper was made from wool. Wool seems to be more and more popular each year. I knew it was more expensive than cotton fabric. When I saw the price tag of $52 for the kit, I walked away. More than I want to spend! 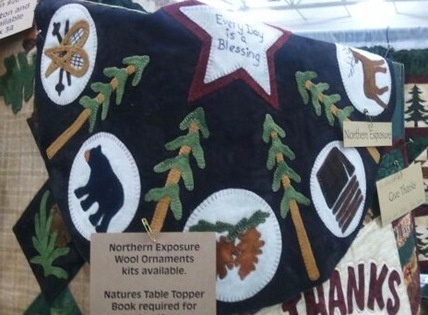 I did buy one other pattern. My brother and his wife have a cabin Up North and love to ride their ATVs. I just couldn’t resist this pattern. I don’t know when I’ll make it, but someday they may have this quilt in their home. 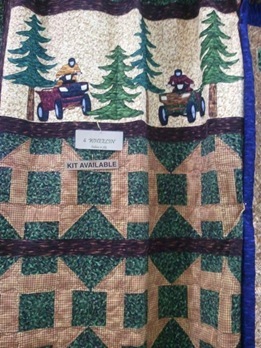 So, that’s just a small sample of this year’s Quilt Expo. I think I’ll take a break from attending next year. I didn’t see that much new stuff this year, and I really want to finish what I’ve already purchased. Of course, that’s what I said last year :)

On the home front, we’ve made progress on getting our broken parts repaired or replaced. Shurflo is sending us an upper housing repair kit for the pump. I sure hope this will take care of our pump problems for a long time to come. This will be the fourth pump in four years.

Carefree has shipped the replacement parts for our awning to a repair facility in Madison. Once they get the parts, we’ll make an appointment to take it in and get that taken care of.

One month from today we leave Wisconsin. We are both getting anxious to be on the road again. We’ll have about a week or two to make our way to Kansas for our jobs at Amazon. We don’t have an exact start date yet. We’ll know more on that in a week or two.

The weather has cooled off. This weekend the wind is out of the north and highs are only supposed to be around 70 degrees. Brrr. After the brutally hot summer we’ve had, we’re not used to this. I’m not complaining, though. I’m so done with the heat!

Posted by RV Khronicles of Kevelyn at 1:05 PM 3 comments: Links to this post