Holstein Cows in the Desert?

Being from Wisconsin, we are very used to seeing Holstein cows.  We did not, however, expect to see them in the Mojave Desert in Nevada. 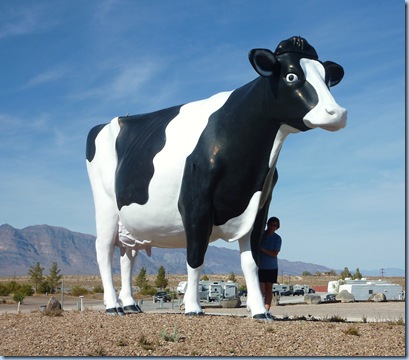 This huge cow stands guard in front of the casino and RV park.  In case you hadn’t noticed, it’s not real.  But don’t worry, there is a very large living Holstein steer here as well. 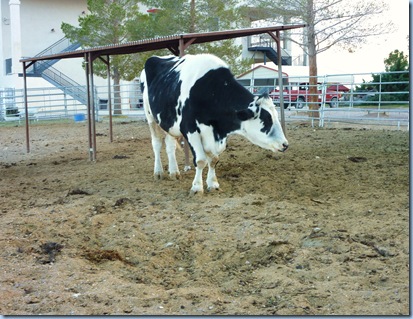 His name is Herman.  He stands 6’4” tall and weighs 2,800 pounds.  I asked the clerk in the lobby why there are cows out here in the desert.  She said it was a gimmick the owners came up with to get people to stop; something to make the place unique.  I’d say it is definitely a unique feature.  Herman has some friends that live with him.  These two donkeys are full grown so you can see just how big Herman really is. 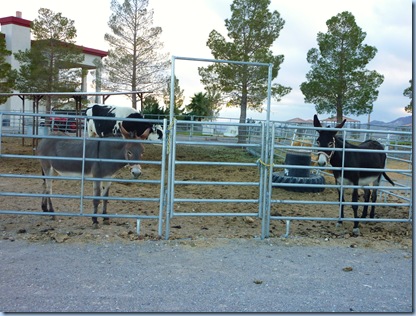 There’s also a goat and the pond behind the casino is home to several ducks.  I get a kick out of hearing the donkeys braying and the ducks quacking.  It almost feels like being on a farm in Wisconsin, but the weather is much nicer.

There’s something else that seems very unusual about this area.  Other than the casino, there is not much else around here for miles and miles.  There are some mobile homes here and there, but that’s it.  The casino has a little mini-mart.  Otherwise, the closest full-size grocery store is 35 miles away.  The closest gas station is 16 miles away.  The entrance to Death Valley is 8 miles away, but then there are hundreds of miles of roads inside the park.  It’s the largest National Park in the lower 48.

But, I digress.  The other thing I find to be very strange is that there are miles of power poles that seem to go nowhere.  There are dirt roads out in the desert that seem to go nowhere.  We’ve been taking walks along such a road behind the casino.  For miles all along the road there are water pumping stations.  I have no idea where the water is being pumped to.  There’s nothing out there. 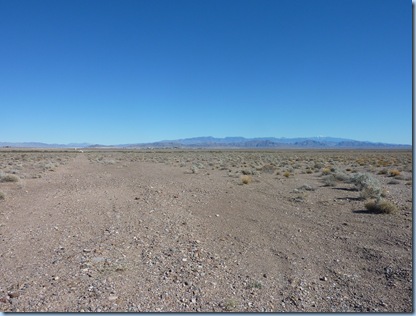 I took this picture today while we took our walk on the road behind the casino.  You can see the dirt road along the left side.  The casino is about 2 miles back down the road.  If you look very carefully, you can see the buildings in the center of the picture.  The mountains are much further away.  Do you see the snow on top of the one on the right?  There is just a little snow on that one mountain.  Spaced all along this road are water pumps.  If you look in the other direction, the road keeps going.  We’re not sure how far it goes, but eventually there are mountains that are part of Death Valley.  That’s it.  There’s nothing else out there.   Strange!

Posted by RV Khronicles of Kevelyn at 7:01 PM No comments: