We left Arizona on April 6th and spent the weekend at Enchanted Trails RV Park in Albuquerque, New Mexico. It's a Passport America park, which gives us a half price stay. We stayed two nights to wait out some strong winds on Sunday.

There wasn't much to do in the wind, but we did take a drive to the eastern side of town to experience a drive on the musical highway on part of old Route 66. If you drive at 45 mph on a stretch of the road, you can clearly hear America the Beautiful. 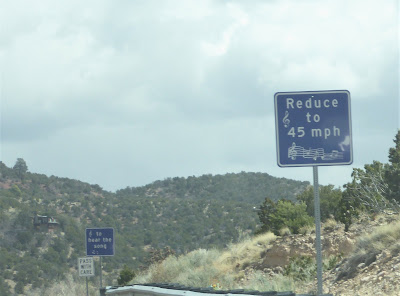 You have to drive your right tire over the rumble strips at the correct speed to hear the song. The strips were installed in 2014 by National Geographic for a show called "Crowd Control". We turned around and did it a second time to get the full impact. Kevin wasn't too impressed, but I thought it was a fun roadside attraction.

We spent Monday night at the South Pueblo KOA in Colorado. There aren't many good choices of RV parks for us on this stretch of the trip where we feel we will fit without too much hassle for one night. The KOA is very nice, but at $51 a night, it's quite a ridiculous price to pay for an overnight. We use Passport America and Good Sam discounts at a lot of our stops, so at least the nightly price we pay averages out.

Here was the view when we arrived. The Rocky Mountains looked a bit ominous, but there was no rain or snow. At least we have a fantastic view for our nightly fee. 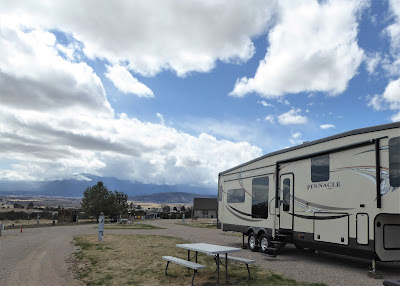 The next morning as we were hooking up, the mountains again gave us an amazing view. 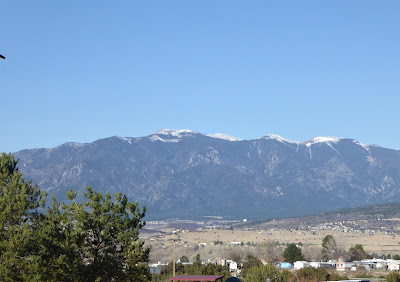 And this little Mountain Bluebird was hopping around on the gravel. How beautiful!!! 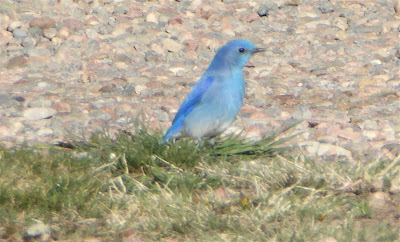 We spent one night in Big Springs, Nebraska and then arrived in Lincoln for a five night stay to visit with our son Korey and daughter-in-law Cathryn. We hadn't seen them since our family trip to Mexico in October, so I was very excited to see them.

Temperatures on Thursday and Friday were quite warm with a high on Friday of 82 degrees. On Saturday afternoon things were quite different with a temperature of 28 degrees, snow and howling winds. That's a 24 hour temperature change of 54 degrees. I-80 in western Nebraska was closed for a few days with blizzard warnings. We had just come through there a few days before. Crazy!!!

Cathryn had a class on Saturday, so we spent the afternoon with Korey. They had purchased a Costco membership, so we took a little field trip to check it out. I managed to spend $120. Then we visited the Zipline Microbrewery where Korey and Kevin enjoyed a flight of beers. I had a delicious hard cider.

Sunday's weather was still terrible, but not as bad as Beaver Dam, Wisconsin where our summer campground is located. They had 8 inches of snow. We were supposed to be back today, but had to extend our stay an extra night in Lincoln to avoid the snow in Wisconsin. Here was the view out of our window on Sunday morning. 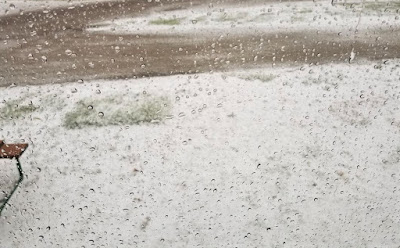 Today we're headed to Amana, Iowa for at least 2 nights. We were hoping the snow would melt and to be in Wisconsin on Thursday, but they are now expecting 3 to 5 inches of snow on Wednesday, so we may be delayed a day or two longer. This is the craziest April weather. Tomorrow our friends, John and Janie, are going to visit us in Amana, and we'll have to visit the Millstream Brewing Company. It's supposed to snow 1 to 3 inches in Amana tomorrow.

If we had known mid April weather was going to be this lousy, we could have spent an extra week in Yuma where it's nice and warm. This will be the latest we get back for our job in Wisconsin in eight years, but we're not risking arriving with a bunch of snow on the ground.

Don’t wish upon a star – Reach for one!
Posted by RV Khronicles of Kevelyn at 8:22 AM 3 comments: Links to this post