For the past three mornings we have been able to take our daily walk without using bug spray!  I’ve had a few bites each morning, but nothing I can’t deal with.  It’s so nice to not have to lather up with greasy bug spray each day!!

I’m thinking I need to take my camera with me wherever I go.  You just never know what you will encounter.  Although, I think you will be glad I didn’t have it with me this morning.  I saw the oddest thing on our walk.  There was a pair of men’s dirty tidy whities hanging from a tree branch along the trail.  They were pretty high up in the tree.  Makes you wonder how they got up there :)  I’m guessing there may have been some alcohol involved!

The weather has been delightful this weekend.  The campground is about 1/3 occupied.  We had a steady business of boat rentals.  Today is predicted to be back near 90 degrees with higher dew points.  It appears summer does not want to end.  At least it hasn’t rained much this month!

I had a question 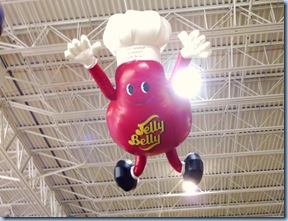 asking whether we got to tour the factory at Jelly Belly.  Our tour was around the warehouse.  They put you on a tram that stopped around various locations in the warehouse. Video screens told the story of the company and how the candy is made.  There were some displays of items used to make the candy, as well as memorabilia type items.   I believe the actual factory is in California, and the Wisconsin location is a warehouse only.

Jelly beans that don’t meet quality control standards are called “belly flops”.  These are sold at a discount in the store.  Unfortunately, the day we visited the belly flops weren’t of a variety we liked.  I guess that was good for our budget.

The store had a sampling bar, but they only gave you one bean per sample.  It was kind of hard to get much of a taste with one small bean.  They also make candy corn, taffy, gummi candies, soda, and different types of chocolates.  I liked the taffy better than the jelly beans.  My favorite taffy was strawberry cheesecake.  When the company originally started, they only made candy corn.

On Friday morning the DirecTV repairman came and fixed our satellite TV.  When the dish fell over during the storm, it bent the actual dish.  It didn’t appear bent, but when the repairman showed us the bent dish next to a new one, the bent dish was off by about 4 inches.  It is up and running again, and all is well.  It did cost us $50 for the service call.  Kevin had hung two milk jugs full of water from it when he set it up, but didn’t stake it because we were only there for the weekend.  He thought the weight would be enough.  Lesson learned is always stake it down!

We’re still waiting to hear from Jayco regarding repairing our bedroom slide.  We’re hoping we don’t have to go to Indiana, and they’ll let the dealer in Wisconsin do the job.

On Friday we had a conversation with our boss regarding next summer.  They definitely would like us to come back.  I explained to him that we enjoyed the camphosting, but we also need to earn some income.  There is a possibility they may have something available for us in which we can camphost and work part-time earning some income.  I’m hoping it will work out!