The ruins of three missions are located within a 35 mile area in the Salinas Valley of Central New Mexico.  All three of them were built in the early 1600s under the supervision of Spanish Franciscan monks.  The missions were built at locations where there were already thriving pueblos.  It is estimated there were over 10,000 people in this valley at that time. The work was done by the local Indians.

Here are the remains at Abo. It’s located at a higher elevation than most of the valley at 6100 feet.  It was very windy and chilly up there so we didn’t hang around very long. 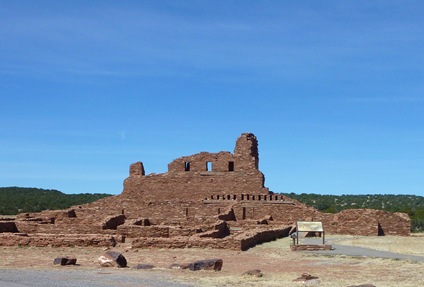 Next, we drove further east to the town of Maintainair where there is a National Parks Visitor Center that covers all three of the missions.  We watched the movie and then headed to the mission at Quaria.  This one is the most in tact of the churches. 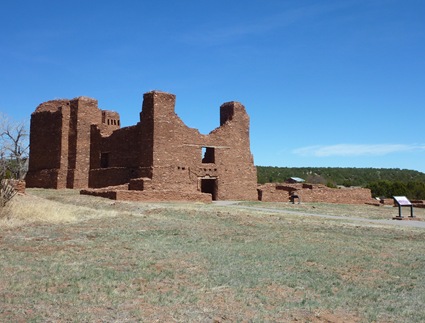 These early people sure were amazing.  What an industrious civilization.

I was surprised how entirely different these missions looked from the ones we saw in San Antonio, Texas a few years ago.  The architecture and building materials were not at all alike.

We walked around and read the signs and got a feel for the history of these places.  The missions were only in operation for about 50 years.  As we have heard time and time again on this trip, the white man didn’t do the Indians any favors by coming into their lives.

The Spanish government taxed the people, imposed a new religion on them and basically caused them all kinds of problems.  When drought and famines came, the Indian people either died or moved on.

What I find interesting, is that the area never recovered.  There are very few cities in this valley.  The ones that are here, look like they’re hanging on by a thread. There appears to be very little going on other than some cattle ranches here and there.

Today the high was 81 degrees which was a record.  It’s quite warm, and also very dry.  The dew point was below zero again.

One thing we noticed at the last two campgrounds we’ve been at is the amount of birds.  Kevin figured out that the reason there are so many at the campgrounds, is that’s the only place there are trees.  Some red-winged blackbirds have a nest in the tree behind us.  They sure sing pretty.  As much as I hear the birds singing, I never see them.  They hide in the pine trees and you can just hear them.

Spring has definitely arrived.  The birds are building their nests and the trees in the campground are budding.  Hopefully, spring will have arrived in Wisconsin when we get there in a few weeks :)

I’d like to welcome a few new followers that have joined our journey over the past few weeks.  The more, the merrier!

Posted by RV Khronicles of Kevelyn at 8:06 PM 3 comments: Links to this post