When we got up yesterday morning, we certainly weren’t planning on buying a new TV that afternoon. However, you know what they say about best laid plans.

We left Rio Raft RV Park for a short one hour drive to McKinney Falls State Park around 11:00 a.m. McKinney is located just outside of Austin. The lady in the office was very nice and registration was a breeze. She assigned us site #14, a large pull-through site with 50 amp electric and water. There are no sewer sites in this park, but we’re only here for four nights so no problem there.

The annual Texas State Park Pass we bought in Mission has been paying off. We thought it was a bit pricey at $70, but it saved us $60 just on our stay here. Without the pass, the state parks charge the daily fee per person for each day you camp in the park. That’s $6 per day, per person. Added to the $24 per night camping fee, it would just be way too expensive to camp in the state parks without the pass. You also get four 1/2 price nights at four different parks, so that saved us another $12.

We got set up and were looking forward to exploring the trails. This park looks like its very nice, and I was excited to get out and do some hiking.

Not so fast! I turned on the TV in the living room to set it up for our new location, and it wasn’t working correctly. It just kept turning itself on and off without touching any buttons. Kevin came in and took a look. We tried new batteries in the remote. Didn’t work. Kevin pulled out the manual and tried some reset suggestions. Nothing worked.

He called Toshiba’s 800 number and amazingly got a person pretty quickly. After explaining the problem, the service person told him it was an internal problem and would have to be repaired. What to do? We’re only here for four days, really not enough time to mess around with trying to get it fixed. Plus, it would probably cost more than it would be worth.

Luckily, we’re quite close to San Antonio so off to Best Buy we went. Our TV was a 42 inch. Most TVs are now 40 inch. We found a Sharp with all the features we wanted on sale for $379. In the truck it went. We did buy the 5 year extended warranty for $69 extra.

I am usually very anti extended warranty. But, since our Toshiba was only 4-1/2 years old before it died, and Best Buy will replace the TV rather than repair it if it dies, we bought the warranty.

Kevin got it all set up. For now it is sitting on its stand on the counter in front of the hole it goes into. Today Kevin will have to do a little modification to the brackets that attach it to the wall. We’ll also have to do a little work on the wood frame that goes around the TV, but that can wait until we’re back in Wisconsin. 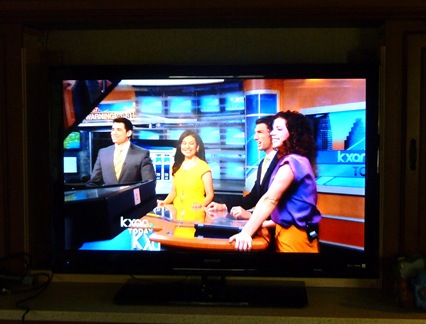 It’s amazing how these TVs keep improving and coming down in price. Even though the old one was a flat screen, this one is considerably thinner and lighter.

They say bad things come in threes, so we are now done!!! Since leaving Wisconsin in October, we’ve had the tire blow out, the roof damage and now a dead TV. Enough already!!

We did see a deer in the site across from us. Today we will do some exploring. 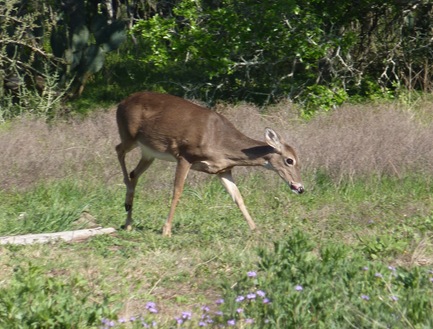