We want to wish all of you a very Happy Thanksgiving.  This has been a year of many changes for us, and we are so thankful we were able to begin living our fulltime RVing dream.  We’re also so thankful for the love and support of our family and friends.

We spent the day yesterday wandering up and down the Vegas Strip exploring many of the hotels and casinos.  We had dinner at Flavors Buffet in Harrah’s.  I enjoyed the shrimp, crab legs and desserts.  We don’t eat at buffets often because I always feel too stuffed by the time I’m done.  This time was no exception.  There is just so much food to try.

We attended the Terry Fator show at the Mirage.  I was blown away by his talent.  It really was a great show.  He allows the audience to take pictures and even record some of the show.  He’s an amazing ventriloquist, but he is also a very good singer and comedian. 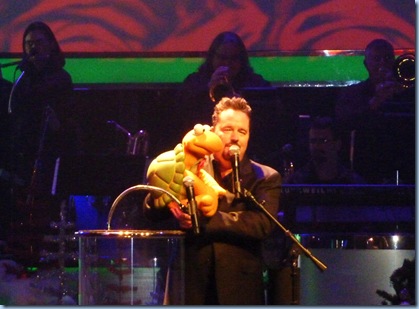 After the show we went to some of the outdoor evening shows.  The winds had died down from the day before so we saw two showings of the fountains at the Bellagio.  This is my favorite thing to do in Vegas. 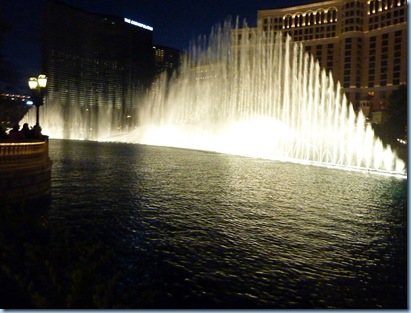 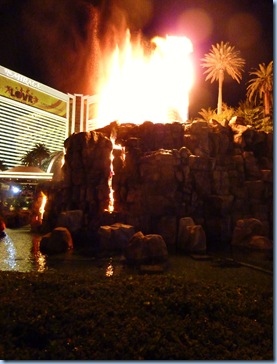 We saw the volcano erupt at the Mirage. 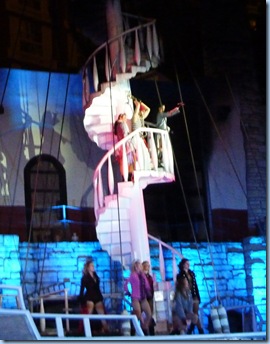 And we watched the Sirens battle the Pirates at Treasure Island.

We did a little gambling, but unfortunately weren’t winners.  At least the drinks were free.

This was our third visit to Vegas, 1996, 2005 and 2010.   It is no longer the cheap vacation spot it used to be.  Our room at the Imperial Palace was very nice and a bargain at $25 a night.  Other than that, everything else has gotten rather pricey.

Food and shows are no longer inexpensive.  I remember the first time we went with friends, we walked up and down the Strip getting freebies or deals at every casino.  We had 99 cent margaritas and shrimp cocktails.  Each casino gave away trinkets like coffee mugs, cards or dice.  And we even saw a free show.

Now, the only freebies are if you go to a time share presentation.  Each casino has their player’s club, but it’s a pain to sign up for them.  The best one we found was $5 in free slot play if you signed up; hardly worth the effort.

I don’t think we’ll be going back anytime soon, if ever.  It’s one of those places that is amazing the first time you see it, but not that much has changed.

Today we drove back home.  On the way we stopped at Wal-Mart in Pahrump and stocked up on some groceries for our last week in Amargosa Valley.  I’m really tired.  I’m not used to late nights anymore.  Time for bed!