Close Encounters of the Elk Kind

The plan for Tuesday was to spend the day in Estes Park.  We started at the Stanley hotel.

It was while Stephen King and his wife were guests at the Stanley Hotel that he conceived the idea for his novel "The Shining." The hotel was fictionalized as the Overlook Hotel in the novel and subsequent film and television versions of the novel. The room that King stayed in was room 217 which is claimed to be haunted.

Interestingly, the theatrical film directed by Stanley Kubrick was not filmed at the Stanley Hotel. Kubrick didn’t think there was enough snow in Estes Park to make the hotel look secluded enough.  The 1990s television version of "The Shining" included exterior scenes at the Stanley.

Famous guests have been President Theodore Roosevelt, John Philip Sousa, and the emperor of Japan. While filming "Dumb and Dumber," actor Jim Carey stayed in the infamous room 217. The Titanic survivor known as the Unsinkable Molly Brown was also a guest. The hotel was built by the inventor of the Stanley Steamer automobile. 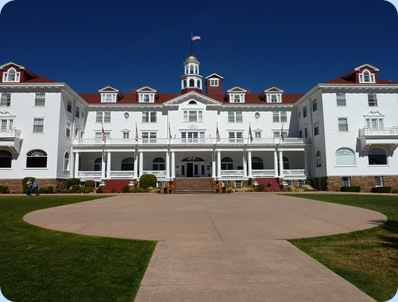 Our next stop was back at the store where I bought my hiking shoes.  Many people on the hiking trails have hiking poles.  I decided to buy one and give it a try.

We then went to Estes Lake in the heart of the city.  There is a 3.75 mile hiking/biking trail that goes around the lake.  We walked all the way around.  There is a golf course that runs along part of the trail.  Many elk were hanging out on the course. 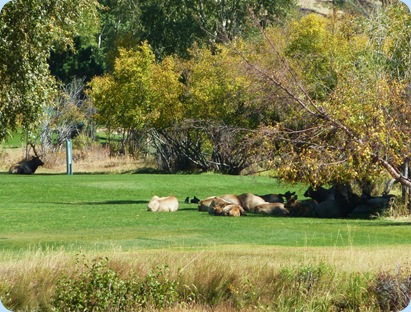 We were about three quarters of the way around the lake when we saw a group of people ahead of us looking at something.  Then we saw the group of elk walking along the trail.  There were 13 female cows and one very large bull.  I took a few pictures and some video.  The elk were walking towards us.

This path has a highway on one side and the lake on the other.  We were next to a large electric tower.  They kept coming so I got up on the side of the path behind the electric tower.  I took a bit more video as they came by.

Now the bull was coming a little behind them.  Instead of going on the path like the cows did, he came up on the side of the trail where we were.  We were on one side of the tower and he was right on the other side of it.  Kevin was in front of me and could have easily touched him.  He stopped right next to us and kind of looked at us and then continued on.  He was definitely letting us know who was in charge.  I was pretty scared.  I actually contemplated jumping into the lake.

You’re always told to not get too close to wild animals, but this time we were there first and they got too close to us.  I was wishing we could have been closer to the elk we saw yesterday at RMNP.  I guess I need to be careful what I wish for, because that elk encounter was too close for comfort!!! 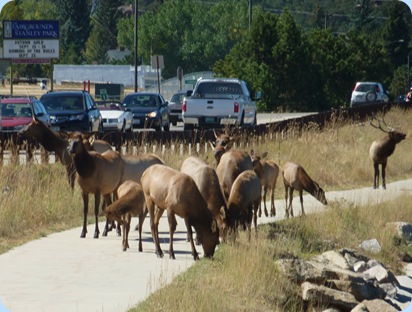 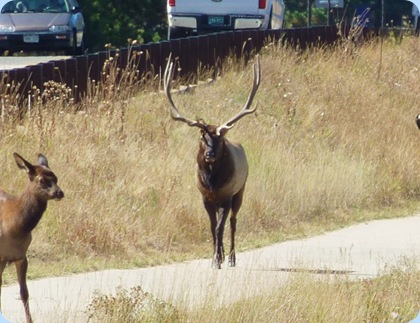 If I knew how to insert video, I would show you the video clip I took right after he went past.  You can see the tower we were next to.  As we were getting back to the beginning of the trail, we heard some bull elk bugling.  I got some video of one of them bugling.  We spent a while sitting on a bench and it sounded like the elk were having a bugling contest.  It was an amazing experience!! 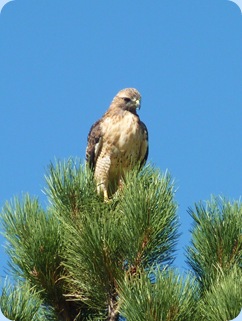 This Colorado Red Tailed Hawk was sitting on top of a pine tree next to the trail.  We sure had a wildlife kind of day :)

We finished our walk and spent about an hour wandering around the shops downtown.  My big purchase was 3 postcards.  Kevin found a t-shirt and a coffee mug.

Cousin Mark sent me the pictures he took on Sunday. 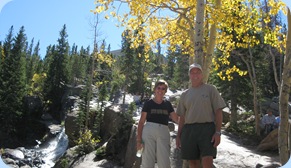 Here we are at Alberta Falls in RMNP. 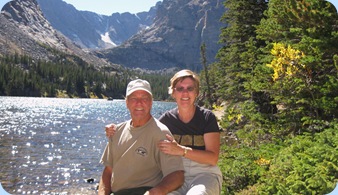 And here we are at Emerald Lake in RMNP. 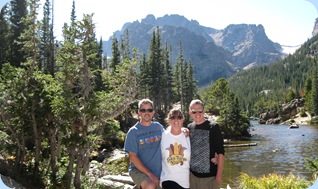 And here are Mark, Dolly, and Daniel at Emerald Lake.

Posted by RV Khronicles of Kevelyn at 4:30 PM 2 comments: Links to this post