On Monday we traveled to George Wyth State Park in Waterloo, Iowa. It was about 240 miles, and we averaged 8.8 miles to the gallon with the new diesel truck. Kevin was very pleased with how the truck tows. He is especially happy with how much better the brakes work. I’m thinking we were definitely overweight with the old truck. The entire trip was into headwinds of between 15 to 25 miles per hour, so we think we did pretty good on the fuel mileage. 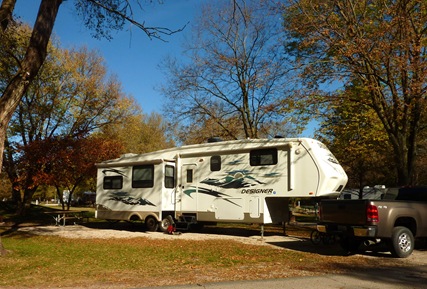 George Wyth is a nice park. Sites are 50 amp electric, but no water or sewer at the sites. Originally, we had planned on staying only three nights so we would have plenty of tank space. The fall rate is only $11 per night including electric. What a great deal. There are lots of hiking and biking trails in the park. It’s a beautiful place.

Yesterday we planned on biking with Kevin’s brother Joe. Rain and cold weather altered those plans. Instead Joe and his wife Julie came to the park and we spent the afternoon visiting. We met up with their son Robert for dinner at Old Chicago and enjoyed some delicious Italian food.

Joe told us that their daughter Jen, who lives in Chicago, was coming for a visit this weekend with her husband and son. We haven’t seen them in almost three years so we’ve extended our stay here through Sunday night. We’ll just be a bit more conservative with our water usage.

Today we drove about 65 miles to Dyersville, Iowa to visit the Field of Dreams movie site. The farm used in the filming of the movie is owned by the Lansing family. They have kept the property pretty commercial free. The site is open to the public to come and take pictures and make memories free of charge. They do have a gift shop to help them with costs. There were a few signs on the property with some interesting movie facts. About 65,000 people visit annually.

Here’s the view from the end of the drive. The baseball field is on the left behind the curve in the drive in front of the cornfield. 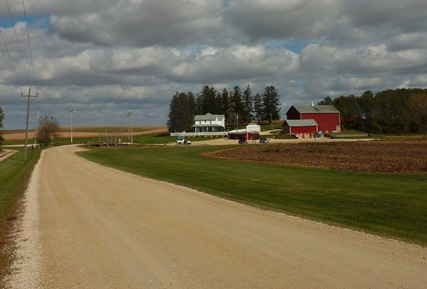 Here’s an aerial shot from a postcard I purchased. 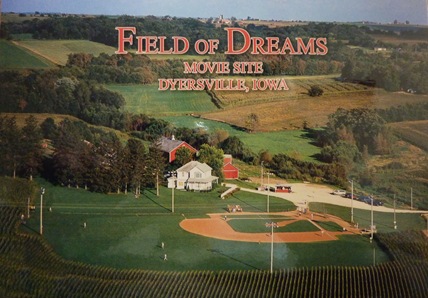 Kevin posed at home plate. Can’t you just see those ballplayers coming out of the corn! 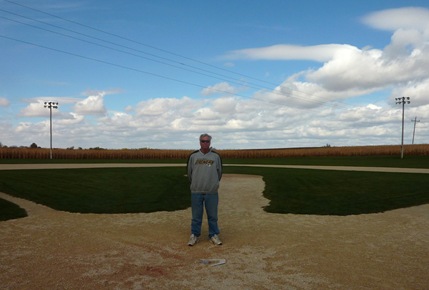 Here’s the bleachers Kevin Costner sat on with the house behind it. The movie production company actually extended the porch around the corner of the house so they could add the porch swing. The swing used in the movie was rented from a family in Dubuque and returned to them after the filming. 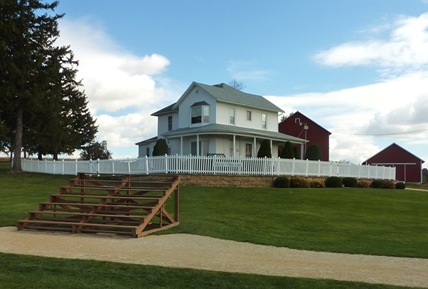 In the movie Kevin Costner’s character carved “Ray Loves Annie” into the bleachers. And here it is, still there. 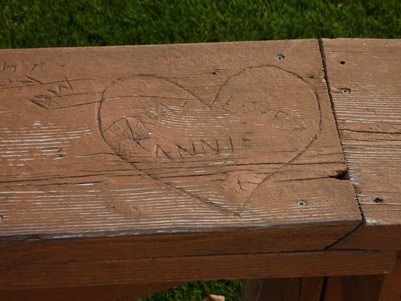 Filming of the movie took place during the summer of 1988. Some walls inside the house were taken down to enhance filming. The owner of the house actually lived in a trailer on the property during the 14 weeks of filming. There was a drought that summer so water had to be diverted from a nearby creek to get the corn to grow. The baseball field was constructed in 3 days. The Iowa Film Board lobbied heavily for the filming to take place in Iowa. When the producer saw this farm, he knew this was the place.

I have received another email from one of my German cousins. This one was from Irina, my youngest cousin. She sent some pictures of her family. Rainer also sent some pictures of his family. Its so amazing to see my cousins as adults around the same age as I am. I still picture them as I last saw them as young adults or teens. I am so loving this virtual reunion!!!

Posted by RV Khronicles of Kevelyn at 4:35 PM 3 comments: Links to this post