On The Road Again

We left Buckeye this morning and drove about 250 miles to Bowie, Arizona.

We’re staying at the Mountain View RV Park tonight. It’s a Passport America member park and is definitely a no-frills place. But, for $15 we have a FHU 50 amp site and that’s all we need. They also have very fast free Wi-Fi. We are very near the limit on our air card this month, so I’m liking the free internet and watching some Netflix. 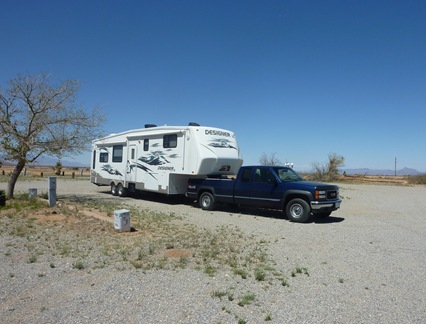 As long as we can keep finding these inexpensive places, we prefer to have hook-ups rather than boondocking at Wal-Mart or someplace like that. We drive a few hours on travel days and arrive by mid-afternoon. We hook up, put out all the slides and are able to relax and enjoy dinner and watch some TV which works well for us.

Bowie is a small town out in the middle of nowhere about 25 miles east of Willcox. When we entered the office there were a group of five men sitting around chewing the fat. I felt like I was on an old western movie set with a bunch of guys sitting around playing checkers at the general store. At least they were all friendly and I didn’t see any six-shooters :)

We got here at 1:30 pm and there were only a few other RVs here which all looked to be permanent. As it got later in the day, a few more RVs pulled in. I happened to look out the window and saw a woman that looked just like Kevin’s aunt. He went out to investigate and sure enough, his aunt and uncle had just pulled in. We visited them in February at their RV park in Casa Grande. They are now on their way home to St. Louis and just happened to end up at the same place we are. What are the odds.

The weather continues to be warm. The last few days cooled off a little and were rather windy. That same front is what caused the tornados in Dallas today. I just saw video on the news of tractor trailers flying through the air. It’s a miracle no one was killed.

The forecast in Phoenix for Easter is in the 90s again. They were talking on the news about hiding the Easter eggs inside because they would melt outside. That made me laugh. In Wisconsin we almost never were able to have an egg hunt outside because it was always too cold, sometimes with snow still on the ground. I never really thought about what Easter would be like in a warmer climate.

Tomorrow we will spend the night in Las Cruses, New Mexico. The following day we plan to arrive at The Ranch, an Escapee park near Carlsbad Caverns. We’re staying there for a week. They have a weekly special going on for only $50 for a FHU site. Such a deal!

Posted by RV Khronicles of Kevelyn at 8:10 PM 3 comments: Links to this post