You may have seen on the national news last week that a massive haboob wreaked havoc from the Phoenix area all the way to Yuma in Arizona. What is a haboob, you may be asking?? Webster's defines it as "a violent and oppressive wind blowing in summer bringing sand from the desert".

Here's a picture from the web as it crossed Interstate 8 in Yuma. Our park model is in a resort that is next to that highway.

I saw that there had been some roof damage in the Foothills of Yuma, which is where we are located. I contacted a friend, and she told me that there definitely was damage in the park. It seems the units on the east side of the park in the initial path of the storm took the biggest hit. There were roofs, carports and decks torn off of homes. Part of one carport roof landed in the swimming pool at the resort.

My friend said the office emailed people with damage. I didn't get such an email, but I thought it wouldn't hurt to double check. Within a few hours of emailing the office, they sent me these pictures. Only a few trim pieces torn off. One on the roof , and two on the skirting. Whew!! Nothing that can't wait until we return. Lucky for us, our unit is on the very western edge of the resort. 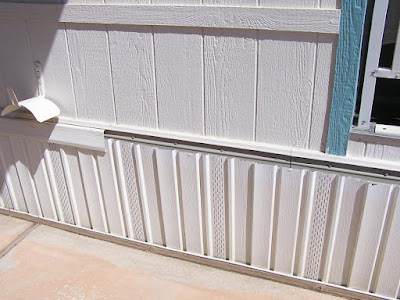 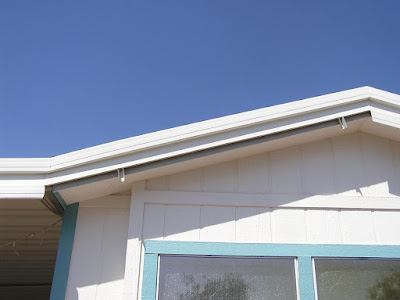 From what I understand storms of this magnitude are very rare in Yuma. Hopefully, there won't be another one for a very long time!! I can't even imagine actually being caught up in it.

Last weekend we had absolutely gorgeous weather. One of those summer weekends, I've been waiting for. Highs in the low 80s and low humidity. We spent much of the time outside. This weekend the heat and humidity have returned. Thank goodness for air conditioning. It is just nasty outside! 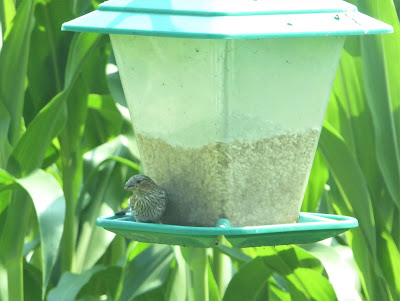 We did have something new happen at the dump station last Sunday. We got a knock on the door from the guy who was parked in the dump. Seems he left the truck running while dumping, and the dog locked the truck with his phone and keys inside. He was blocking the only access to the dump and the park was full of people leaving that day. We needed him out of there. I called the sheriff's non-emergency number and a very helpful dispatcher had a deputy there within 30 minutes. He had a tool to get the truck unlocked, and all was right again. Thanks to the Dodge County Sheriff's Department for a job well done. 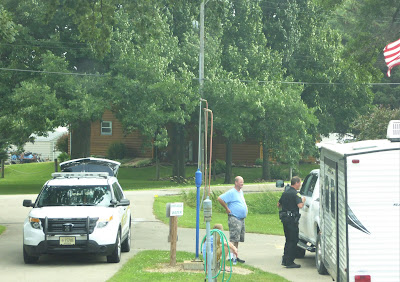 With much of my time spent inside this season due to the weather, I've been doing a lot of quilting. Last Tuesday my machine had a breakdown. She is in the repair shop right now. I sure hope I get her back soon. I'm thinking of an upgrade, and keeping the one I have as a back up. I'm lost without my machine. The local quilt shop has one on sale that I've got my eye on. It's an extra 10% discount the week of your birthday. My birthday is a month away, so I have a feeling I know what Kevin is buying me for my birthday this year, whether he knows it or not :)

My daughter-in-law Cathryn had given one of the quilts I made to her friend Allison when she had her first baby. A few months ago Allison contacted me and asked if she could purchase two baby quilts from me. One for her nephew and one for her expected second child. I agreed and got busy. She sent me pictures of the two babies on their quilts. So precious!! 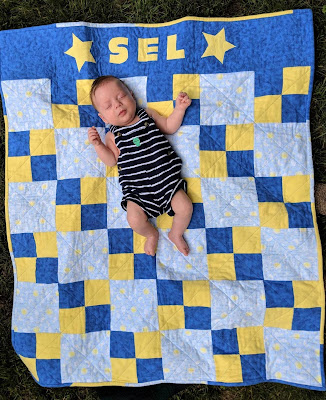 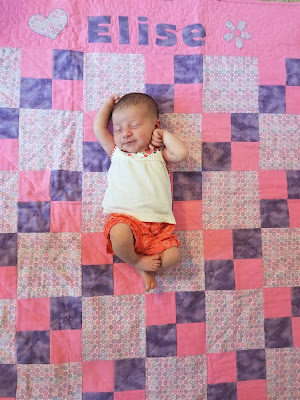 I'm currently working on more baby quilts to give Cathryn to use as gifts, and another one that will be a gift for a friend in Yuma. Now I just need my machine back.

Don’t wish upon a star – Reach for one!
Posted by RV Khronicles of Kevelyn at 1:30 PM 5 comments:

Today is the 60th anniversary of my parents and I arriving as immigrants from Germany to the USA. I was 10-1/2 months old at the time. I actually took my first steps on the ship coming over. Here's my first passport picture. 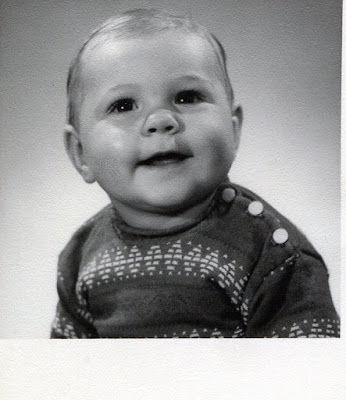 My mom tells the story of seeing the Statue of Liberty for the first time and holding me up to see it. They had such dreams about starting a new life in the land of opportunity. In order to come, they had to apply for legal entrance and have a sponsor to help them. My dad's parents and brother also came. My grandpa's cousin was our sponsor, agreeing to help them find a place to live and get jobs.

It was much harder getting started than they ever imagined. They did not speak English. Eventually, everyone got jobs. With much hard work they made a wonderful life for themselves and me. They take great pride in the fact that everything they accomplished was done with hard work, never needing to take any kind of government assistance. So, the 4th of July holiday has always been extra special for my family, as it marked our arrival in a new country, fulfilling the dream so many others have had before and since!

Kevin and I celebrated our 41st wedding anniversary on June 11th. We had a nice day playing a round of golf and going out for dinner at Benvenutos Italian Restaurant in Beaver Dam. The food was really good!

The weather continues to be lousy this season. Either rainy and cool or super hot and humid. Last weekend we had a heat advisory with a heat index over 100 degrees. The next two days are going to be near that hot and humid again. I'm wishing for some nice crisp Wisconsin summer days!

Last Sunday Kevin and I went to Madison and checked out two microbreweries. The first was Ale Asylum where we took the tour. A great deal at $5 per person which included a pint of beer and a sample during the tour. They began their company in 2006 and have grown to be the third largest microbrewery in Wisconsin. They are very proud of their commitment to making great tasting beers while doing what is best for the environment. Quite an accomplishment. Kevin tried four of the beers and really liked them. 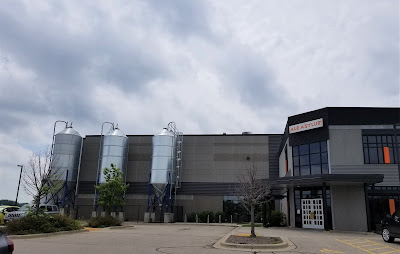 Our second stop was at Next Door Brewery. Kevin tried four of the beers, and I had a hard cider. He said the beers were okay, but he liked the ones at Ale Asylum better. I don't like beer, but still enjoy the tours and sharing Kevin's interest in microbrews.

Don’t wish upon a star – Reach for one!
Posted by RV Khronicles of Kevelyn at 8:08 AM 1 comment: