We left Wisconsin on a beautiful sunny fall day on Monday and drove to Carlock, Illinois. We got there around 2:30 pm and checked in at Kamp Komfort RV Park. We like to keep our drives to between four and five hours a day, so this was a good place to stop.

We were checked in by a very nice lady. She gave us a long, full hook-up, level, pull through site near the back of the park. The park is beautifully maintained and landscaped. The only bad thing is it is right next to I-74 and the road noise is pretty bad. It was great for a night or two, but I wouldn't want to be there for an extended time.

As you have probably heard, the tiny house movement is becoming quite popular. I've watched the Tiny House show on HGTV a few times, and find them very interesting. We saw our first one in a campground at Kamp Komfort. Makes you wonder what their story is. 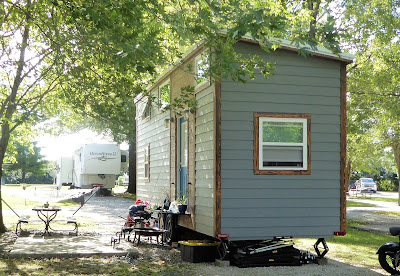 We left Carlock Wednesday morning and headed to Paducah, Kentucky. We had been in that area many years ago on a long weekend trip with our friends Jim and Sue. At that time, we had just bought our new conversion van and decided to take a road trip. We stayed at the lodge in Lake Barkley State Park in the Land Between the Lakes area. Little did we know that it was a dry county, so we drove to Paducah to purchase some libations.

There was quite a bit of construction on I-57 in Illinois and we were delayed over an hour and a half by all the slow downs. Along the way, we saw this gigantic cross. I'm not sure what it was for, as I didn't see a church near it. 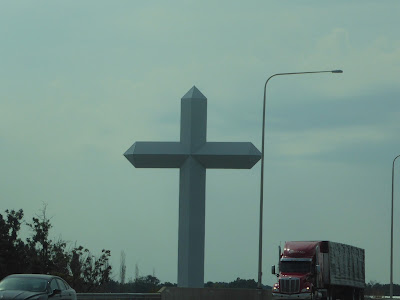 We also saw this motorhome towing a travel trailer. Upon looking closer, Kevin noticed the license plate was a Texas in transit plate. I'm guessing they were being delivered somewhere. It did look kind of funny, though. 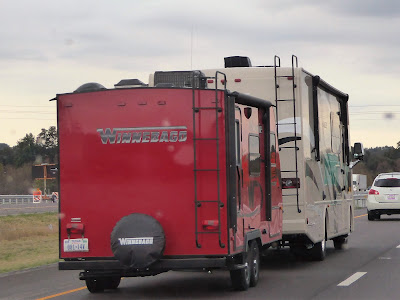 We're staying at Duck Creek RV Park. It's conveniently located to downtown Paducah and has all the amenities we need. A full hook-up, level pull-through site with a clear shot to the southern sky for a satellite signal. Other than that, it's pretty much a gravel parking lot. Not a destination park, but a good spot to stay while exploring.

Yesterday we ran some errands and took a walk in John Nolan Park. It's a large park in the city with a large fishing pond, some very nice playgrounds and a hiking/biking trail.  Some workers were putting up lots of large Christmas light displays. I'm guessing you can drive through the park and see all the lights when it's all done. Looks like it will be really awesome. 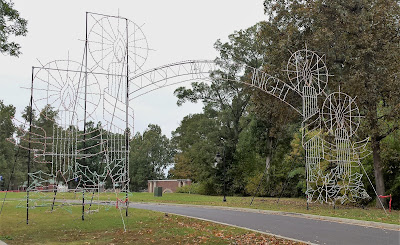 We stopped at the Dry Ground Brewing Co which was opened in 2014 in a former Coca-Cola bottling company. It's a beautiful building that's being restored and the brewery is in one corner of it.

The story goes that in 1937 the Ohio River flooded Paducah and the first bottling plant was submerged. The owner, Mr. Carson, used an empty syrup keg to float out of the second floor window to reach a rescue boat. He said if he ever reaches DRY GROUND, it is there that he would build a new bottling plant. In 1939 he celebrated the opening of his new facility located 31 blocks from the river across the street from the Red Cross evacuation site where he had been off-loaded following his rescue. Thus, the Dry Ground Brewing Co. Great story. 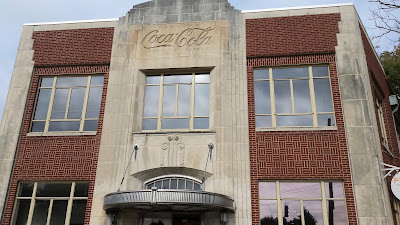 Kevin ordered a flight of six samples. I had a cranberry hard cider, which was quite good. Kevin says all the samples were good, but his favorite was the Kentucky Bourbon Barrel Rapture. It's really amazing how many microbreweries are popping up all over the country. We are making an effort to search them out and help them stay in business :) 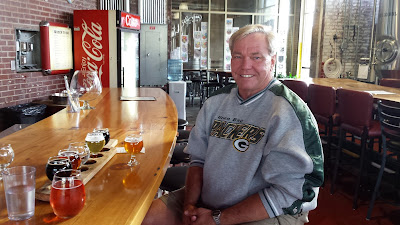 Today I'm going to check out the National Quilt Museum, and we'll do some exploring downtown. Unfortunately, some rain is predicted so we'll see how much exploring we accomplish. Today is also my mom's 79th birthday, so I'll be calling her later. She is in excellent health for her age and plans to live a long time. You go, Mom!

Posted by RV Khronicles of Kevelyn at 8:33 AM 2 comments: Links to this post