On Thursday afternoon Kevin and I went bike riding with Kevin’s brother Joe. Unfortunately, Joe’s wife Julie had to work. Joe and Julie live in Waverly, Iowa where Joe took us out on the Rolling Prairie Trail. Another very nice paved Iowa bike trail.
We rode 16.3 miles round trip. The forecast was for 60s and sunny. Unfortunately, the weather guessers were wrong again. It was much cooler and overcast. We even got sprinkled on a bit. However, it was still a great ride. Thanks to Joe for giving us a tour of the trail. Here are Kevin and Joe next to the tallest Pompous Grass I have ever seen. 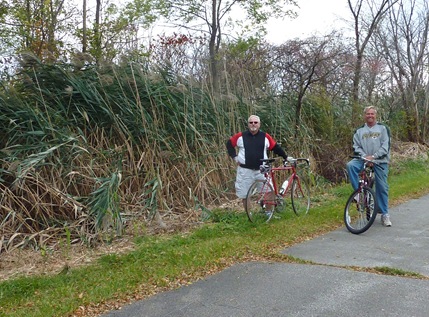 On Friday Kevin and I rode about 9 miles on the paved trails in and around George Wyth State Park. There are some small lakes in the park. This one is called Brinker Lake. 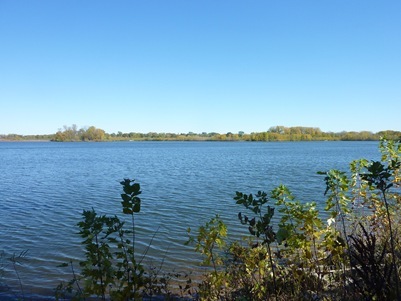 Part of the trail runs along the Cedar River. As you can see, most of the colorful leaves have already fallen to the ground. It was still a very pretty ride. 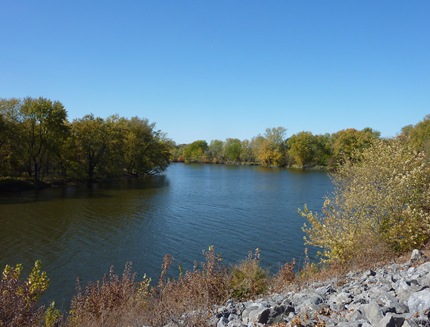 Much of the Midwest, including Iowa, is experiencing a severe drought this year. According to the newscasters, this area is over 16 inches below normal. The drought conditions are very noticeable in some of the waterways. The water level on Fisher Lake in the park is very low. These Canadian Geese must be wondering what all this mud is doing here. 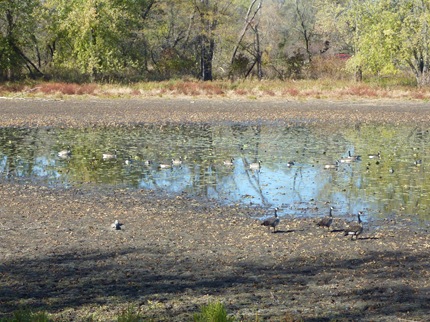 Last night we went out for dinner with Joe and Julie, their son Robert, and their daughter Jen with her husband Mike and their son Nathan. Jen, Mike and Nathan live in Chicago and are visiting her family this weekend. When we found out they were going to be here, we extended our stay so we could see them. It’s been almost three years since we’ve seen them. Nathan is now four years old and is such a little cutie.
We ate at a retirement community. You may be thinking that sounds a bit odd. The story is that the chef at the retirement center used to own his own German restaurant in the area. He got out of the restaurant business because of the crazy hours. He was hired at the retirement center. Once a month he puts on a German dinner in their dining room and the public is allowed to make reservations.
It’s really a win/win/win situation for everyone. He gets to prepare his German cuisine, the proceeds go to the retirement center, the public gets to enjoy the great food and visit the fantastic retirement center which is great publicity for the center. Their dining room was just as nice as many restaurants I’ve been in. The food was fantastic!! They don’t serve alcohol, but the public is allowed to bring in beer or wine. What a great idea this chef had!
Today has been pretty rainy, but that’s okay. They really need the rain. Tonight we’re going to Joe and Julie’s house for dinner with everyone. It’s so nice to have a more flexible lifestyle now and be able to spend some extended time with family.
We got a phone call from Amazon yesterday. They were confirming our assignment as pickers. The lady I spoke with assured me that we will be pickers working the 8 shift which is nights on Monday, Tuesday, Thursday and Friday. That’s exactly what we wanted. Hopefully, this year what they told us and what happens will match! On Thursday we report at 8 a.m. for orientation.
Don’t wish upon a star – Reach for one!
Posted by RV Khronicles of Kevelyn at 2:23 PM 1 comment: