We’ve been quite busy this month, so I’ve barely had time to think about blogging. Here’s a little recap of what we’ve been up to since my last post.

Eric left on the evening of March 17th. We went to one last Brewer baseball game at Peoria Stadium to watch the Brewers play the San Diego Padres. It was a value day so lawn seats were only $5. We got there early enough to snag a table under the big tent in the outfield. What a great spot to watch the game. A nice table with comfortable chairs in the shade. I honestly don’t remember who won the game, but we had fun. We attended five games with Eric while he was here. 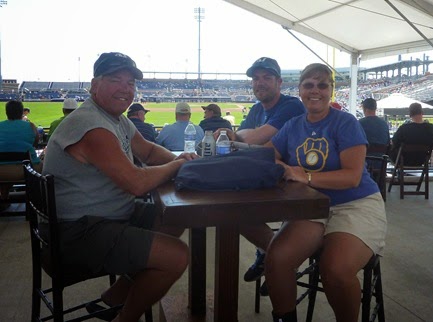 After the game we had dinner at a favorite spot, Texas Roadhouse. Then we dropped Eric at the airport where he headed back home to Wisconsin. The week sure did go by quickly.

Since Eric left, we’ve attended two more Brewer games with John and Janie. The Brewers have four games this spring where they are giving away leftover bobble heads from last season. I plan to sell them on eBay when we get back to Wisconsin. The last time I did this, I was able to sell them for enough to cover the cost of the games we attended.

On Saturday we tagged along with John and Janie to an RV show in Chandler. They’re thinking of getting a larger fifth wheel, so have been doing research. I think the research is always so much fun. We looked at lots of RVs, but none of us saw anything that made us ready to give up what we have.

By the time we were done looking around, we were thirsty. The Arizona Wilderness Brewing Company microbrewery was nearby, so we stopped to quench our thirst. Reports are the beer was good. I’m not at all a fan of beer, so I enjoyed a nice cold glass of ice water. The place was very busy, so we decided to find someplace else to eat.

Janie checked her phone and found the Blue Adobe Mexican restaurant nearby. It turns out we ate here a few years ago after a ball game in Mesa. The food was just as good as we remembered.

On Sunday we watched the Brewers beat the Chicago White Sox 14-4. Its always fun to watch our team beat a rival Chicago team. It was another hot day, so we found some shade against the outfield wall. 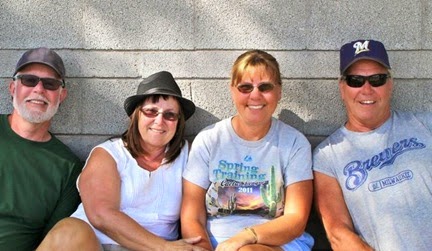 Thanks to Janie for taking the pictures. I really like this picture she took of us. The colors are so vibrant. 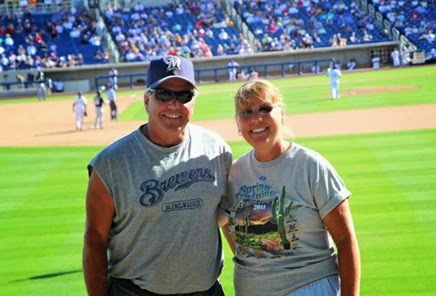 I’ve been enjoying watching the hummingbird nest outside my window. Two babies have hatched which is keeping the mother very busy. I had to laugh the other day as I watched the mother chase away a mourning dove. She was fierce! 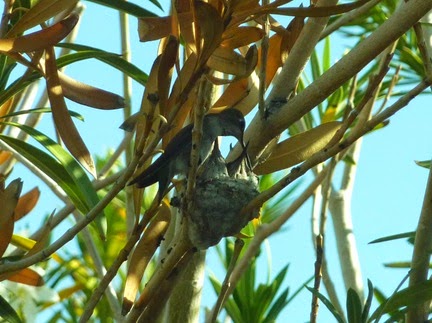 One of the park models has prickly pear cactus that are blooming. They sure are pretty. 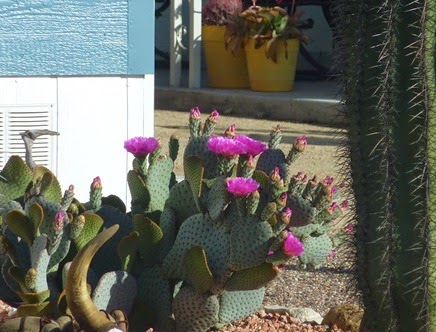 The weather this month has been unseasonably warm with temperatures averaging over ten degrees above average. It is true that dry heat is nicer without humidity, but it is still hot if you are directly in the sun. In the shade it is very nice, so we’ve been finding shade whenever possible.

We leave Arizona in about a week, and it is time. Although it will still be a bit too cold in Wisconsin, we are ready to get out of this heat. There are some changes in the works regarding our summer plans, but I won’t go into any detail until we get back and make things official.